In recent years, chatbots (or conversational robots) have evolved a lot, to the point that some almost manage to pass themselves off as human interlocutors. Integrated with messaging services like Messenger, chatbots are bargains for brands.

Improving the customer experience, communicating 24 hours a day with users and better understanding their needs: these are all challenges that they meet without a hitch. Here are 14 examples of chatbots that really help drive sales.

> Download: The guide to creating your first chatbot” align=”middle”/>

1 – Mya, the chatbot that facilitates the recruitment process

Mya is a chatbot intended to facilitate the recruitment process. Equipped with artificial intelligence, Mya communicates with candidates via Facebook Messenger, Skype or SMS. He asks them questions about their experience, checks their skills and answers their questions about the hiring company. According to its creators, the chatbot allows recruiters to gain 144% in productivity and increase the rate of completed applications to 93%. Candidates also benefit from this system: their applications are no longer unanswered and they can go through the recruitment stages more quickly.

Famous French dating site, Meetic launched the first dating chatbot, named Lara. Using natural language processing, Lara communicates with Meetic users to help them find a soul mate. The chatbot searches for compatible couples and gives advice to singles to improve their profiles, send the first message or have a successful date. A real cupid! Since the launch in 2016 on Facebook Messenger, 300,000 users chat with Lara every month. This encouraged Meetic to go further by deploying Lara Voice, a voice coach compatible with Google Home.

See also  10 most common languages ​​(and how they are used) 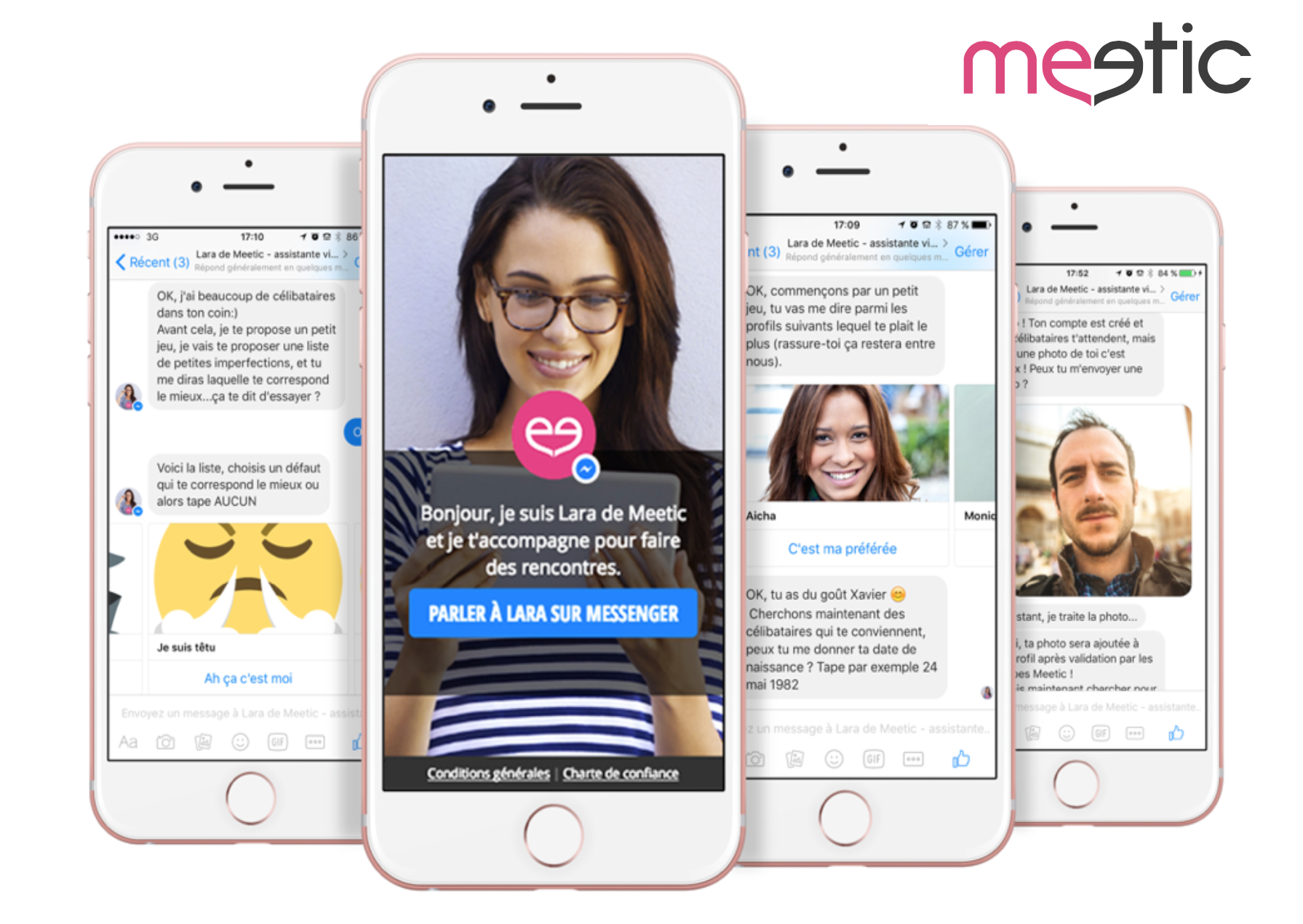 In 2017, OUI.sncf launched OUIbot, a conversational robot to improve the customer experience of its users. Accessible on the OUI.sncf site, but also WhatsApp, Facebook Messenger or even Google Home, OUIbot aims to be wherever the customer is. The chatbot allows you to book train tickets, find the best prices and download your tickets in the conversation. OUIbot responds to more than 10,000 customers every day. Praised for the quality of its responses and recommendations, it won the Best Robot Experience award in 2019.

4 – Kuki, winner of the Loebner Prize

Available on platforms such as Facebook Messenger, Telegram, and Kik Messenger, Kuki is considered one of the smartest chatbots out there. Created by Steve Worswick, this robot has won the Loebner Prize five times (competition between conversational agents). It is above all an emotionally intelligent robot, able to communicate in the most human way possible, with even a touch of humor. Users turn to Kuki not only out of curiosity, but also to cheat loneliness. The goal here is to create a relationship with the user, but not to sell him a product.

Considering that luggage is the second most frequent topic when requesting assistance on social networks, Air France has decided to launch a chatbot specially dedicated to this topic. Louis therefore responds to questions from customers on Messenger regarding the company’s baggage policy and provides the status of delayed baggage. A few months after the birth of Louis, Air France deployed Lucie, an “inspirational” chatbot that gives customers travel ideas and redirects them to the site to book. 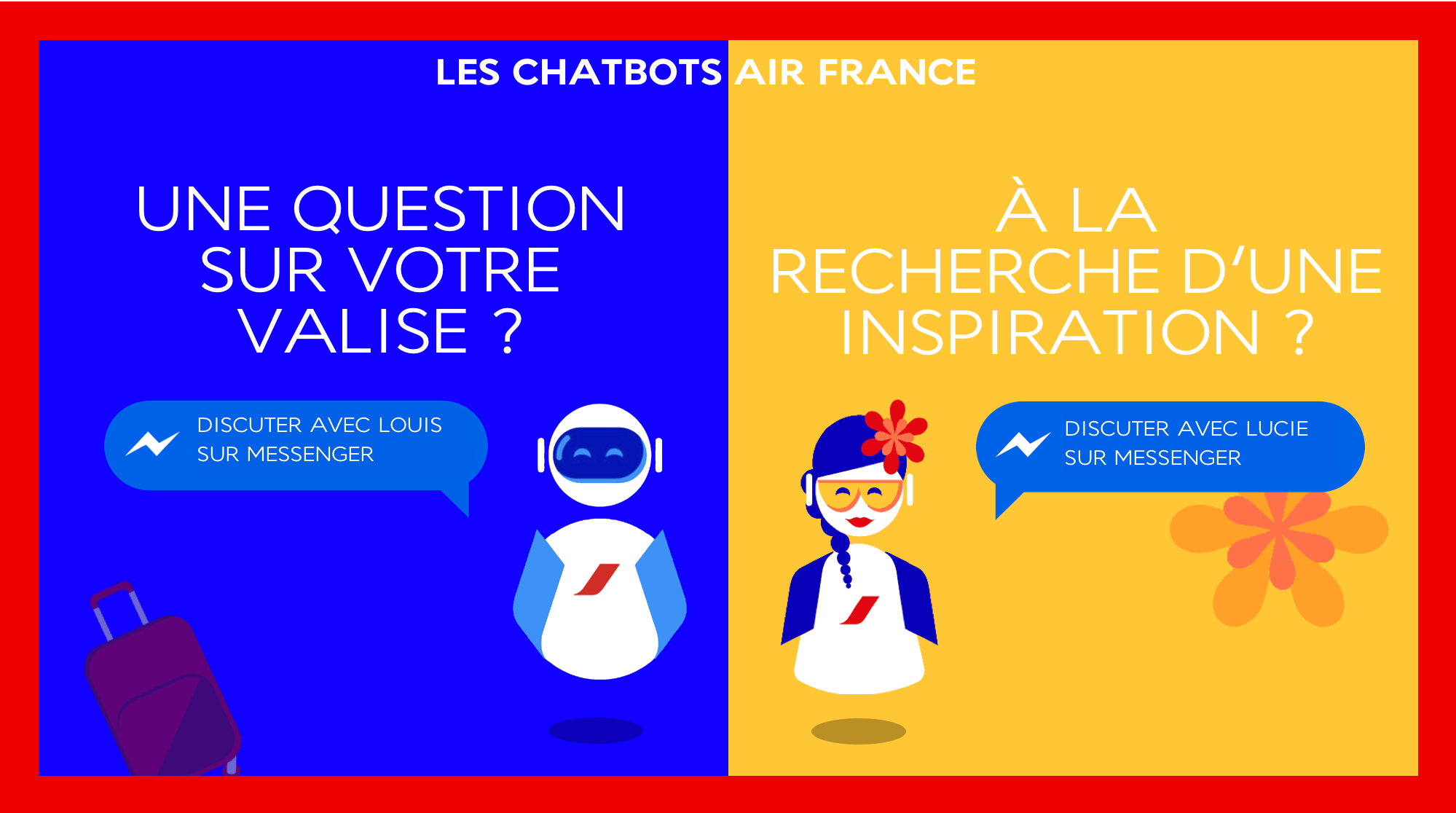 Developed in 2013, Ariane is a chatbot intended to answer questions from users of the Ircantec site, a supplementary pension fund. The aim is to reduce the number of human contacts on the most frequent questions, in particular those concerning access to personal space. Ariane records more than 11,000 conversations each month and has significantly improved the user experience of the site.

Created in 2016, Askovet is a veterinary chatbot that supports owners of domestic animals such as cats, dogs and rabbits. It centralizes all the information necessary for the welfare of animals. Thus, owners can ask questions and discuss the health of their animal with the robot and whether it needs to see a veterinarian or not.

Askovet also offers veterinary clinics to develop their own chatbot in order to relieve their switchboards.

Hello Fresh is a meal kit delivery service that promises fresh food and very balanced recipes. Freddy, his Messenger chatbot is an example of an innovative chatbot, because it allows you to have good and simple evening meal ideas. The chatbot

Freddy, HelloFresh’s Messenger chatbot, is a support chatbot. It helps customers to prepare their dishes with the ingredients received via the boxes and to send recipe ideas.

Thanks to its chatbot, HelloFresh has been able to relieve its after-sales service, in particular the management of messages received via the Facebook page, while improving customer relations. But Freddy also makes it possible to make sales: in 2018 for Black Friday, HelloFresh achieved 64% of conversions thanks to a promo code sent via its chatbot. 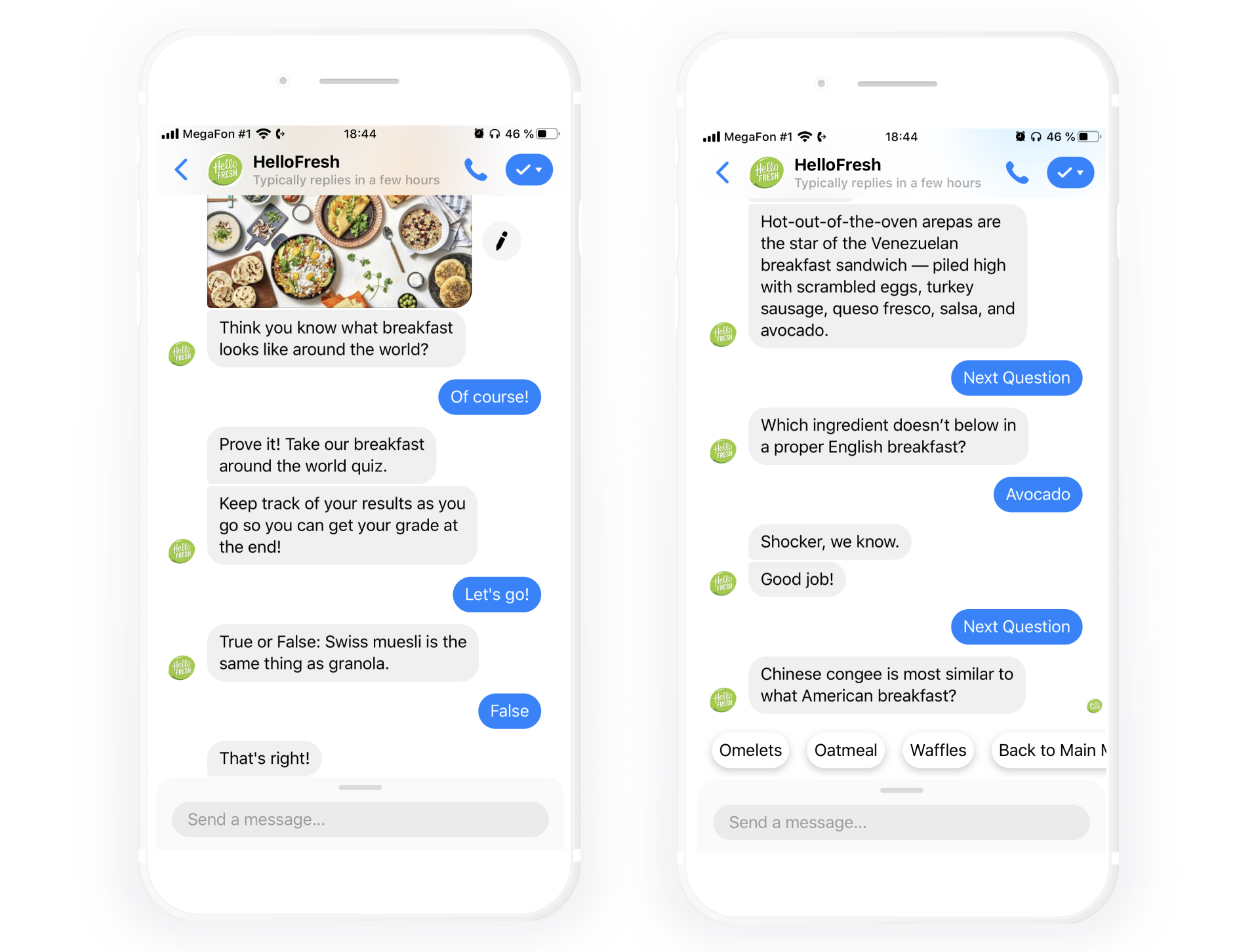 Promoted by social networks, disinformation is becoming an increasingly persistent problem. The spread of “Fake New” is proliferating, in particular during this period of the Covid 19 health crisis. The WHO Health Alert chatbot created by the WHO (World Health Organization) helps to fight this.

Available exclusively on WhatsApp, it provides reliable and up-to-date information. All the themes related to the crisis and the coronavirus are centralized, users interact with the robot by sending keywords or emoji. 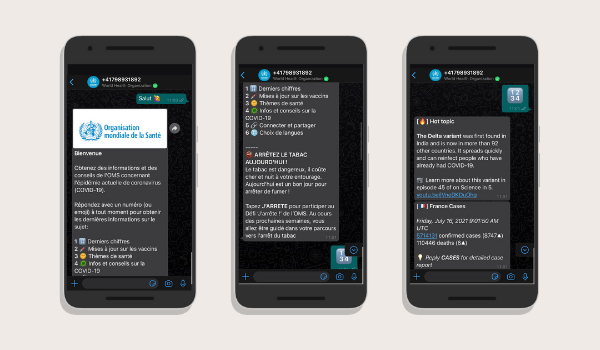 Using artificial intelligence to facilitate access to culture, this is the mission of the Ask Mona chatbot.

Available on Messenger, Mona sends ideas for cultural outings (exhibitions, monuments, shows or festivals) to the user who talks with her according to her location, her desires and her budget.

Currently, the Ask Mona service has been used by more than 48,000 people and has 2,000 cultural outings.

See also  How to shorten a URL? 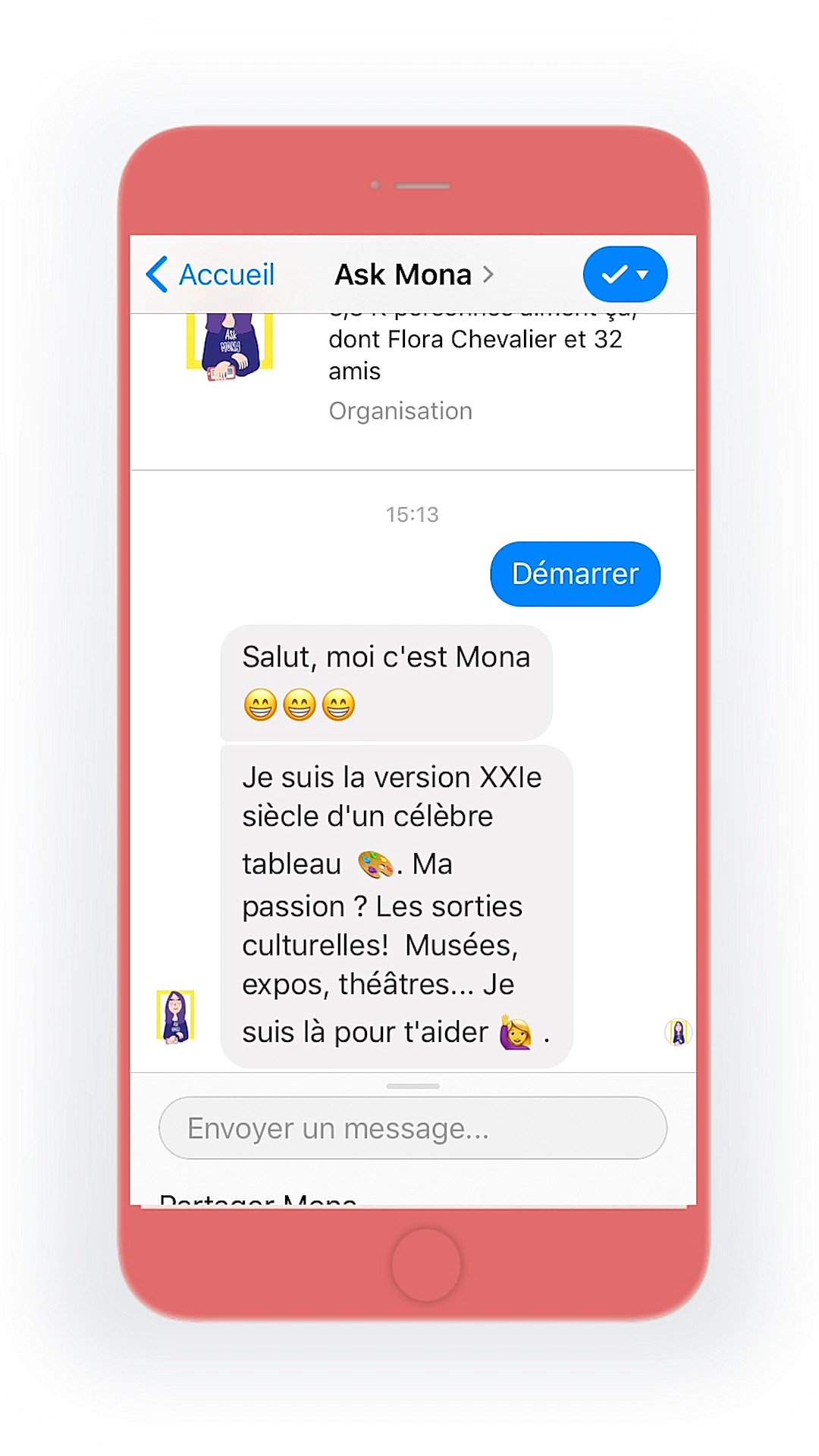 Bob le Bot is a French voice chatbot that improves customer relations. Its artificial intelligence allows it to take qualified calls and answer them to relieve the teleoperators.

Thanks to this artificial intelligence, it is now possible for companies to manage exceptional telephone flows, 24/7/365. Bob the Bot can also carry out automated surveys. A significant saving of time (and money) for the companies which manage important telephone switchboards.

12 – Aloha, the chatbot for job search

Adecco, a recruitment firm specializing in temporary work, has created the Aloha chatbot to help its candidates in their job search.

Available on the Adecco site, Aloha is a real virtual assistant with whom it is possible to converse in order to have faster access to qualified job offers. Candidates can thus express their request and avoid hours of research. They can also ask any questions about how Adecco works and get the contact of the agency closest to them.

Aloha facilitates the job search, but it is also a good way for Adecco to more easily source new profiles.

Although criticized on some technical aspects, Duplex offers many advantages to private and professional users, such as being able to reserve a table in a restaurant outside of its opening hours. Duplex also participates in solving accessibility problems such as the language barrier.

14 – Woebot, the chatbot for depression

According to the WHO, more than 300 million people (of all ages) suffer from depression and 800,000 of them commit suicide each year. High figures which alarm on a disease often complicated to diagnose.

Created by Stanford University, Woebot is a chatbot that helps reduce the state of stress caused by depression. Although it will never replace a full medical treatment, its artificial intelligence is built according to cognitive-behavioral therapeutic techniques.

To learn more about bots and find out how conversational bots can help you generate leads, download your free guide.