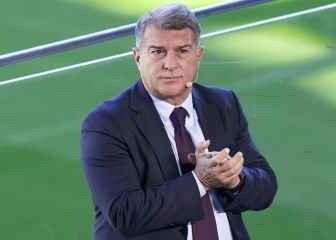 Spanish clubs begin to take oxygen in their accounts, but the economic situation is still not positive. LaLiga this week presented its economic report for last season and announced losses for the first time in the last decade. The negative numbers were 828 million euros, but in the forecasts it is that the expectations to close this season will continue to be in the red (-297M€). From LaLiga they predict a transfer market still very different from the frantic ones and large disbursements that occurred before the pandemic. It will be a transfer window at half gas, where austerity and transfers at zero cost will continue to be the order of the day. Although, the regulations approved by the clubs themselves will allow them to have certain lights and shadows when going to the market. Only teams like Real Madrid, which enjoys great economic health, could cope with the arrival of players like Mbappé, although in this case he would arrive for free when he was released from July 1.

Fourteen clubs are exceeded in their salary limit

One of the keys when going to sign is that each club knows its salary limit. This concept collects the maximum amount that each team must spend on transfers and salaries of both players and the coaching staff of the first team and the rest of the categories. It is a fundamental principle so that they are solvent and do not end up in default. But the current situation in LaLiga is that up to fourteen teams have committed more millions than the salary cap that LaLiga gives them. According to a senior management official, this situation for the summer will not vary excessively. It could be that number is reduced or increased by two. How can it be the case of Athleticuntil now exceeded its limit, but with the signing of a new sponsor and the classification for the next edition of the Champions League, they assure from the bosses that they only need a sale of a player to return to being in a balanced situation in their accounts.

To determine the salary limit, clubs must subtract non-sports expenses and debts from their income. The margin they have left is all the money they have to spend on salaries. Now, what if that salary cap is below what they actually spend on payroll? Well, they go to the transfer market with their hands tied. The options of being able to sign are complicated and the old saying is used: “Before you enter, let them out.”

LaLiga and the clubs themselves have approved a mechanism for these situations, to which up to fourteen First and Second Division clubs will be forced to resort during the summer. Among them is Barcelona, ​​whose poor economic situation is public. To be able to sign, they can benefit from two rules: 1/4 and 1/3. The rule of a 1/4 or 25% is the best known: for every four euros you save or earn, you can allocate one to signings. In this way, LaLiga forces said club to save three euros out of four, pushing it to redirect its poor financial situation, but allows it to spend one out of four in order to be competitive. The other option is the 1/3 or 33% rule.. This is new and is exclusive only for this summer of 2022. Last season there was the 1/2 or 50% rule: which said that if you sold a franchise or highly relevant player (his salary occupied 5% or more of the wage mass of said team), the employer let you spend one euro out of every two that was saved or entered. However, this measure was temporary due to COVID and expired at the end of January. Now, as the clubs are still drowning due to the pandemic, a variant of this rule has been created for the sale of franchise players: for every three euros that are saved or entered, one will be allowed to spend on salaries.

A rule that many teams will resort to this summer and with which they will juggle to make the templates. Check here what is the latest salary limit for First and Second Division teams published by LaLiga. Although it is a cap that changes “second by second”, according to the employer’s association. Every time there is a movement of players (sale, transfer or purchase) or the arrival of new income (sponsorships, capital increase, income from competitions…), the margin that each club has to pay salaries and transfers is updated.

Extension of the debt derived from COVID

Another novelty that will give the clubs a break is in the debts derived from COVID. They won’t have to deal with all of it when calculating the salary cap this summer. We remember that the formula for these concepts is the subtraction of the total income from the structural expenses and the debt of the clubs. The impact of the pandemic can be assumed during the next five seasons. It is redistributed as follows: in the 22-23 season 15% is assumed: in 23-24 and 24-25 20% each, and in 25-26 and 26-27 22.5% .

An example to understand the benefit of this measure. If a club has 50 million losses derived from COVID, for this summer it will only have to assume 7.5 million. If a team had an income of 100 million, with non-sporting expenses of 30 and said losses were 50, the salary limit they would have would be only 20 million euros. On the other hand, with this measure, this summer the losses derived from the pandemic that they would have to assume would only be €7.5M and the salary limit would be €62.5M (€100M in income – €30M in non-sports expenses – €7.5M € of losses).

LaLiga and CVC have signed a 50-year agreement. The investment fund has promised to give an injection of money of almost 2,000 million euros to be distributed among the clubs. The money is already reaching the coffers of the teams, but they have some conditions to spend it. Only 15% can be used for salaries and transfers. But there’s good news for clubs in excess: the 1/4 or 1/3 rule doesn’t apply to this money. 15% of the money they receive can be spent entirely on one or more transfers.

Let’s take an example: a team receives 100 million CVC, of ​​which they can spend 15 million on transfers even if they exceed their salary limit. It is not necessary to spend all this summer, they have three seasons to spend that money. The one that is about to end (21-22) and the next two (22-23) and (23-24). Although there are some clubs that have already consumed part of those millions, there are a large number of clubs that have almost all of them left. Which would allow them to go to the transfer market to strengthen themselves.

But, as this injection of money is a loan, the clubs will have to return that 15% in the future. They will be deducted from the salary limit for five seasons: from 2024 to 2029. In this way, during this period of time and at the free choice of the clubs, they will be deducted from the salary limits of said campaigns, reducing them to repay the loan. Although, by then, they hope that with the remaining 85% of the money, the clubs will have grown and increased their income in such a way that said reduction is not so pronounced.

When the pandemic was still hitting hard in Spain and it was not known when LaLiga would resume again, Tebas already warned the clubs about the upcoming transfer markets: “Forget about the signings, think about homegrown players and on loan.” And so it has been. Transfer spending went from 1,533 million in the 2019-20 season to 547 million in the latter. The investment in players has been reduced by two thirds.

Now, the problem with this crisis is in that concept: the market has stopped. There are almost no movements and many LaLiga teams had a business strategy in which a great weight of revenue fell on the sale of players. In this way, of the 435 million obtained from the sale of players in the 2015-16 season, it went to 1,128 million in 19-20. What happened to the pandemic? Well, the market dried up and the millions no longer flowed as before, which cut short a line of business for many clubs (such as Barcelona, ​​one of the keys to the great crisis it is going through). Between last summer and this winter, LaLiga clubs have entered 542 million in sales, half of what was achieved a year earlier.

“This is possibly the game that recovers more gradually, due to the strong impact on player activity. The contraction in Spain has been greater compared to the rest of the benchmark competitions, so the impact on results (capital gains) is also being, when in addition the dependence on these results is higher in relative terms in LaLiga. The post-COVID recovery cannot be considered complete until this business vector is normalized”, LaLiga forecasts. In addition, in the aforementioned report, LaLiga predicts that the recovery in the transfer market will return to normal until the 2023-24 season at the earliest. “With the summer and winter player markets for the 21-22 season concluded, it is confirmed that the transfer activity has continued to deteriorate compared to pre-pandemic levels, in a logical containment effort at times of greater uncertainty, which however leaves certain elements that glimpse a gradual recovery during the next seasons and that could show a practically full normalization from the 23-24 season”, reflects one of the analyzes in said document.

But all the effort in the last transfer markets will not be in vain. It will have green shoots and positive consequences in the medium-long term (four to six years). Every time a player is signed, the amount paid for him is amortized over as many seasons as he signs. If a club buys a player for 50 million and signs for five seasons, it will amortize his signing in the income statement at ten million per year. Now, as the level of signings has plummeted, the amount of amortizations that will have to be paid will be reduced little by little, which will leave more salary limit free.