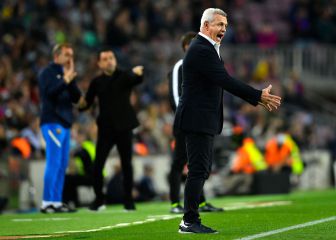 Javier Aguirre did not erase his smile for a moment during the press conference after the game in the Barcelona despite losing 2-1 in the Camp Nou. The Aztec coach assured that he had more than enough reasons to be proud of the work of his men.

Did they think they could tie the game?

We lacked a bit of conviction in search of the second. That goal we scored at the end gave us joy. It is very difficult to score two goals at the Camp Nou.

What did you think of the return of Ansu Fati?

It is a joy for all of us who love football because the injuries have punished him a lot.

Hasn’t he been too daring in his approach?

I don `t believe. Neither against Cádiz nor against Rayo did they have much success in the goal. Against us a little more. But I am satisfied because we are honest and we know what we play.

What was the plan?

We knew it was very difficult to score here. I haven’t thought about the Granada game. It is difficult to take the ball away from Barcelona. It is the usual story in this field. I am satisfied with the performance.

I’ve been optimistic since Mallorca called me. It will not be decided until the end. Until the last minute of LaLiga.

I am the coach and I decide.

What were you looking for with Take Kubo’s entry?

He is a boy with imbalance and he must be set free. His only function was that he played behind the 9. I would like to have more minutes. I liked his game.

What did Xavi say to you at the end of the match?

I’m not going to tell you what we’re talking about, but in no case about wasting time.

Is dead. If you’re not tired in the 87th minute at the Camp Nou, you’re screwed.

The technician also spoke into the Movistar Plus + microphones.

What assessment do you make of the defeat at the Camp Nou?

Here we knew that it was going to be a complicated game, that they were injured and were going to come out with everything. The injured recovered. It was an important game for them as well as for us. We tried to make our match and it didn’t work out. We lost face. I leave not happy, but satisfied with the performance

Improvement of Barça after the last games at the Camp Nou.

It happens that every game is a final for us. We have four left: two at home and two away and we will try to score. The team got stronger today in some things. They were superior in possession, shots into the area, arrivals… We are an honest team that works, a team that tries to compensate for other deficiencies with its weapons

What did the team lack after 2-1 to cause problems for Barça?

Believe that you could. The last few minutes was a clear example that we wanted to continue with the ball when the game called for us to throw it long in the remaining minute. We put Hoppe in because he is very fast and they didn’t even throw a ball at him. They are things that with the heat of the game the player does not analyze but they were superior. I congratulate you. We return home and continue fighting

A final against Granada

Yes, at home we hope to take advantage of the circumstances.