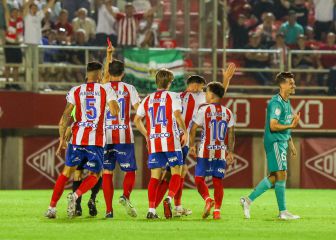 Algeciras has requested that the playoff dispute for promotion to Second Division be paralyzed, which, in principle, should start next weekend in Galicia while his appeal is resolved before the Appeals Committee that he will present this Monday while the case of possible improper alignment of Castilla is resolved.

The club from Algeciras has communicated this Sunday in its official channels that it will present an appeal to the Appeals Committee for the challenge for improper alignment against Castilla dismissed by the Competition Judge of the Royal Spanish Football Federation. The albirroja entity will request precautionary measures

After last Saturday’s victory in Sabadell and remaining just one point away from the promotion playoff, the institution has activated all the necessary means to exhaust the two sports legal channels it has in its hands: the RFEF Appeals Committee and the Court of Arbitration for Sport (TAD).

This is the statement from Algeciras

“We want to inform our fans that the legal services of the club, internal and external, have been preparing the appeal all weekend, which tomorrow (Monday) will be presented to the RFEF Appeals Committee. In it we request, while it is resolved, the taking of precautionary measures aimed at ensuring that the interests of the club are not harmed, in the event that it is estimated favorably and the promotion league has already been held”. “If the Committee’s resolution is negative, we will proceed to file a claim with the TAD, also with the request for measures, in this case extremely precautionary, with the same objective that the passage of time is not an insurmountable inconvenience”.

See also  Ferguson, the last one who punished Madrid and 39 years ago!

The reason for the claim

Europa Sur explains the situation perfectly. The play that caused the complaint occurred in the 79th minute of the match against Castilla when Madrid player Antonio Blanco was sent off for a red card after a hard tackle. Referee Alexandre Alemán Pérez showed the card to Blanco in the 79th minute and 12 seconds. The footballer was slow to leave the field -it seems that he was conscientiously late- and left in the 80th minute and 39 seconds, when Castilla carried out the substitution of the youthful Villar for Jaume Jardí to once again have seven players with template tab.

With the arbitration report (finally published) in his hands, Alemán Pérez notes the expulsion of Blanco in the 79th minute and notes the change of Villar for Jardí in the 81st minute.

What the Regulation says

Article 223 of the RFEF Competition Regulations essentially explains the followinge “Once the match has started, the teams must be integrated, throughout its development, by at least seven footballers, from those who make up the squad of the category in which they play. The fact that for any reason, including the expulsion of a footballer or substitution due to injury, the team is made up of less than seven footballers from those referred to in the previous paragraph, will be considered as an infraction of improper alignment.

The debate comes because it was not really played between the moment of Blanco’s expulsion and the consummation of the change. Algeciras wields that the delay in substitution was out of the question. That is what the Campogibraltareña entity clings to.

There was a precedent in a Deportivo-Extremadura when a player from the Almendralejo team spent three minutes on the sideline after an injury, so the team had 7+3, which the Galicians grabbed for a claim that, in the end, did not go any further.