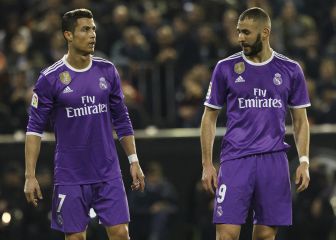 Score or not tonight against Betis, Karim Benzema already knows that this season he will be the top scorer in the League, the top scorer: with 27 goals, he has an income of nine over the second (Aspas, with 18) and ten over the third (Vinicius, with 17). In any case, the white ‘9’ will try to score against the Betis, to whom he has scored eight goals in 17 games throughout his career; he will try to get moralized to the final in Paris and, incidentally, to fatten up his figures in the League, which are already the best of his life: his best mark was in the 24 goals he achieved in the 2015-16 League; last year he stayed at 23 and the previous two, at 21.

If he scores, moreover, Benzema will be left alone with Cristiano at the top of the Whites’ scoring table. Right now the Portuguese is leading it (450 goals), followed by Raúl and Benzema, both with 323, although the Frenchman reached that figure in much less time, specifically in 138 fewer games. Be it tonight, be it in the Champions League final in Paris or be it next season, the clear thing is that there are no doubts that Benzema will retire, at least, in second place on the podium of the Real Madrid gunners.

End to six years of streak of Barcelona

Although he wants to take the step now and rejects relaxation: “We are champions, but to prepare for a Champions League final we have to play well, win and gain more confidence. We have to make the people who come happy, which is the most important thing. To respect Betis you have to win.”

With this top scorer, Benzema will cut a streak of six years in which the top scorer was from the eternal rival, Barcelona: Messi five times and Luis Suárez once, in 2015-16. There hasn’t been a Real Madrid top scorer since 2014-15, in which Cristiano was; he had also been in 2013-14 and in 2010-11. All in all, Madrid’s dominance in terms of top scorers is still broad: Benzema will be 28th, to Barcelona’s 19th.