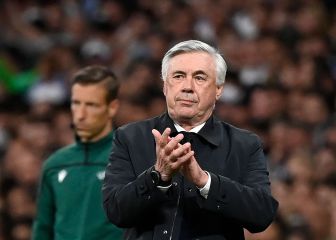 Carlo Ancelotti has passed through the microphones of Movistar Plus + after Real Madrid’s victory against Manchester City with which they entered the Champions League final.

How can you explain: “The greatness of this club is this. It is a club that does not allow you to lower your arms when it seems that everything is over. It gives you the strength to continue, to continue, to believe… We played a game against a very strong rival, even, competitive … When everything seemed to be over, we looked for the last bit of energy to equalize it. If you equalize a game in the last minutes you have a psychological advantage. You enter into another dynamic”.

What was missing before?: “We did well in the first half. We lacked a bit of success when we had the pass between the lines. We abused the long pass.”

Does it have more merit today or the same?: “We have played some very tough round of 16, some very tough quarters… Against three teams capable of winning the Champions League. It has been a success”.

What was the motivational video you saw before the game?: “It was one of the eight comebacks we’ve made this season and it ended ‘There’s one more to go’. We’ve completed it. At least you started the final 0-0, this isn’t bad”.

Are you going to smoke a cigar now?: “It wasn’t a cigar, it was just a photo with my friends. The players are my friends.”

The Italian coach spoke afterwards in the press room before the media.

How is this explained?

Explaining it is not so simple. When everyone thought it was over, a small detail was enough, Rodrygo’s goal, and there was little missing. We put it all. To win matches like this you have to have a bit of luck. The game has been very competitive. But the team has not lowered its arms, after the 0-1 it was much more complicated, but we have had everything, the sacrifice, the luck, the energy, the changes helped. They have given everything, it has been very intense, we have pressed up high, City have not played as they usually do. We have put a lot of pressure and it has gone well.

It seems impossible to explain…

Something strange has happened, we have played against a very strong team, accredited to win the Champions League. I don’t know how to explain it, much of the credit goes to the players, and to the fans that push, push, push, inside and outside the stadium. In the days before as well. The weight of these players when they put on the shirt, the pride of the club, of all of us.

Liverpool in the final, an old acquaintance of yours…

The feeling is that I am very happy, to participate in another final against a great team, I played against them as a player and as a coach. I’ve lived there for two years, for me it’s like a derby, I’m still an ‘evertonian’.

They never lower their arms, it’s something special. Talking about something inexplicable leaves you a bit far from thanking the players for what they have done, I can’t stop thanking them. It is true that the atmosphere plays, but you have to have this quality, what Rodrygo has done coming in and scoring two, Ceballos and Asensio sacrifice themselves, Vallejo comes out for five minutes and wins all the duels… Nobody thought we would play in the final. But here we are.

Yes, but also Kroos, Modric and Casemiro did a great job for 70 minutes. Fantastic job, we knew it could cost them a little more towards the end. The future of Madrid is assured, these three are going to continue and behind them are young people of great quality.

How did you handle the tactic in extra time?

In extra time the most important aspect was the psychological one. When you are able to equalize in the last minute it is because they had a slump and we, with Rodrygo’s second, looked for more and more energy. Just controlling well, defending well, we had a psychological advantage.

See also  Ancelotti: "I couldn't have dreamed of a better comeback"

What do you think of Klopp?

I know Klopp well, he is a good coach, I have the utmost respect for him, for his coaching staff, for his team. It will be a fantastic final, two different teams, it will be a very close final for football.