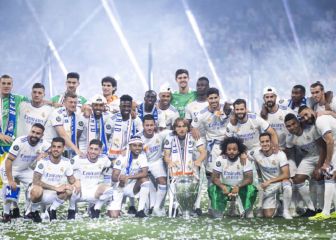 The end of the party at the Bernabéu was the culmination of the day of ecstasy for Madrid for the Fourteenth, the epilogue of a historic path in this Champions League of miraculous comebacks, festive chairs, Rodrygazos and finally another Orejona to present to Real Madrid.

A celebration in front of 60,000 madridistas in which a smiling Carlo Ancelotti had a lot to do with it. The transalpine celebrated his sixth European Cup with the effusiveness of a child and was in charge of thanking Real Madrid, microphone in hand. “Good night, Hala Madrid! Let’s go! Thanks for the love of the whole season, what a season eh! (the audience started in applause)… What a comeback, what a push from this stadium, we’ve had a great time We are madridistas like you”.

Carletto, about eight years ago, wanted to sing the anthem of the Tenth with the same good will as then. A night in which joy was mixed with the sad part of the farewell to a myth.

Marcelo, the only one who received a multiple ovation, quintupled, like his championship rings, was feted by his people as his status as a living legend -25 titles- proves. More than that number of tears had to fall down the Brazilian’s cheeks, especially when his teammates received him to make a pineapple around him. Pure communion. Also from the Bernabéu: “Marcelo stay! Marcelo stay!”.

A party that started late, expected after the very busy institutional agenda of the team and the trip to Cibeles. I expected a Bernabéu in dance mode and that he even came dressed. In the stalls around the stadium, in a prodigy of speed, there was merchandising from the Decimocuarta with scarves and T-shirts with the Paris result printed on them.

Once inside, the DJ was adding degrees to the atmosphere with some song of dubious taste, there being minors, but above all the boiling point was the video with all the compiled comebacks, goals sung almost as when they happened. Tsome offensive chant was also heard, isolated, against Mbappé. Banners of all kinds were seen in the stands, some for those who said goodbye to the white parish, a good number for Marcelo, some also for Isco (“We will love you wherever you are”). The man from Malaga was excited. Bale, another who is leaving, lived the party as he has been doing on the few times that he has been seen lately in the stadium, with a very serious face.

At 10:57 p.m. they finally began to step on the footballers one by one, but first, Carlo Ancelotti. Vinicius was the most acclaimed, pointing to his shield and shaking his hips. The “Vini, Vini!” spontaneous of madridismo was the first interval in the script to thank the Stade de France scorerwhich shared the highest number of decibels of the madridista throats along with Courtois, Modric and Benzema. They also took home their share of extraordinary ovations the new generation, Camavinga, Rodrygo and Valverde. Andrew luninIn addition, he was the only one who was allowed to skip the protocol of only wearing Madridista symbols to proudly display the Ukrainian flag.

And the chair. While the fans started with a “So, so, so Madrid wins!”, it was Marcelo’s turn to address his last words to what has been his home for 16 years. “It is a wonderful moment in my life, I am closing a cycle here, at the best moment in the world. Thank you very much for the magical nights we have experienced here. The future of Madrid is assured with these youngsters. Hala Madrid!” A speech crowned by the final blanket of his teammates and the umpteenth request from the Bernabéu that he stay.

Real Madrid didn’t leave until they made a clear request (“Golden Ball, Karim, Golden Ball!”) and managed to conjure up the presence of the quintessential symbol of this Fourteenth. “Pull out the chair, Alaba, pull out the chair!” The Austrian, who has fit like a glove with the stands, only took a few seconds to please the crowd. He chair to heaven and everyone home happy. Being as it is Madrid, citing already for the Fifteenth.