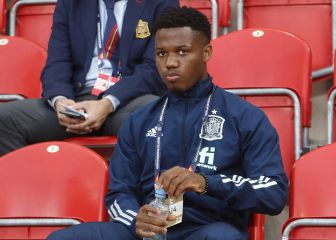 Of those summoned by Luis Enrique for these first four days of the Nations League, Ansu Fati is the only outfield player who has not had minutes, since Thiago left the concentration injured. His role, at the moment, is that of a mere observer to the point that last Sunday, in Prague, he was dismissed from the call and in the morning he had gone to work on his behalf in a park in Prague. Luis Enrique insisted in Seville that “Ansu is recovered; forget about it because a pathology is created.” Even on the day of the call he announced that his call was involved in special circumstances. See him up close, check his physical condition, that he is in contact with the group because he has it in mind with a view to the World Cup. Luis Enrique did not promise him minutes, but it was surprising to see him out of a list.

Contrary to Barça, where he finished the season playing timidly and was even able to score a goal, Luis Enrique has preferred to lead the Bissau player his own way for now. And that has implied that he does not play. Perhaps the experience of Ansu’s last year and a half creates a certain suggested sensitivity about his real physical state. But also strange. Ansu, meanwhile, focuses on the advice of those closest to him and is obsessed with recovering one hundred percent. But with patience and listening to the people he trusts. Among them is Luis Enrique.

See also  Madrid takes over from the 'CMK'