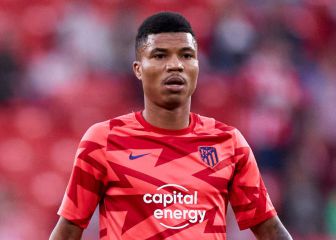 Reinildo Mandava will be in the derby. The Committee of Appeal has considered Atlético’s appeal, has invalidated the card that the Mozambican saw in Bilbao and Simeone is once again counting on the player to reinforce the defense against Real Madrid. Good news two days before the appointment. Mario Hermoso, for his part, will have to serve a sanction for five yellow

The Appeal resolution agrees with the rojiblanco club, which claimed that, after seeing several television shots, Reinildo does not touch Iñaki Williams in the action that cost him the yellow. The Committee states: “In the present case there is a manifest material error (of course, patent) alleged by the appellant club, since it is incompatible (its compatibility is not merely doubtful, which would be insufficient) what can be seen in the images with what reflected in the minutes: there is no contact of the sanctioned player with the rival or any other action of the first that allows to appreciate the knockdown mentioned in the minutes”. And he adds that: “Being clear that there was no demolition, it becomes irrelevant if it occurred recklessly”, alluding to the fact that Mateu explained in the minutes that the card was for “recklessly knock down an opponent in the dispute for the ball”.