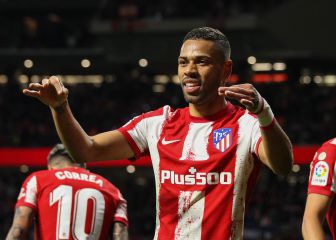 Atlético has found a new sponsor and has signed the most important contract in the club’s history with him. As reported 2Playbookis about WhaleFina platform of trading (purchase and sale of stock assets) and this agreement will report to the rojiblanca entity about 42 million for each of the next five seasons (210 million euros in total). The team will wear its logo, a whale, on its chest. AS has been able to confirm that the agreement now only has to finish off some projects that will be carried out together with this new partner.

The club improves like this and almost triples the profits I was getting from Plus500, its sponsor since 2015, who began contributing 12 million and currently gives between 15 and 17. The reality is that Atlético de Madrid has grown since then in sporting, economic and social matters. Last week, without going any further, the club reported a new member record, above 130,000, with figures finally higher than those prior to the pandemic. That has allowed him to aspire to this important agreement.

As explained 2PlayBookthe platform – founded in 2017, controlled by Amber Group and headquartered in Hong Kong – allows users to create their own investment portfolio based on cryptocurrencies and works with technologies such as blockchainAI and big data. Its valuation has already reached 3,000 million dollars. Atlético will be one of the avenues for promotion in Europe.

Atlético, as AS has learned, has had many suitors to occupy the site that Plus500 will leave free. The international growth of the club, based on the sports performance of recent seasons, has led to offers from all over the planet, with several proposals for cryptocurrencies, although a stable sponsor has been sought.

WhaleFin will not only be the sponsor of the shirt, but will carry out different projects and help in the digital development from Atletico. The commercial department is still talking about these issues.