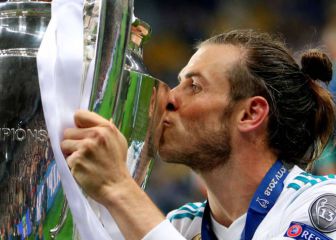 Gareth Bale was coveted for several summers, but it was in 2014 that the arrival of the Welshman became a reality for Madrid. The one from Cardiff went from being a remarkable winger to Southampton to the lane of a Tottenham that had been growing. From there he caught the attention of all of Europe with a legendary match against Inter in the Champions League and advanced lines to become a voracious attacker with meters ahead. His speed and his shot from distance made him one of the best in the world and Real Madrid ended up attracting him.

In 2014 and surpassing the amount invested in Cristiano Ronaldo, Gareth Bale became the most expensive signing in the history of Real Madrid and he did not disappoint. In the season of his arrival, he left two of his most memorable goals. The first was against Barcelona in the Copa del Rey final. The Welshman had a one-on-one against Marc Bartra and started like a Formula 1 with a notable self-pass in which the ball surrounded the Catalan on one side and Bale, leaving the field, on the other. Completed the dribble, defined and closed the final.

The other most remembered goal of 2014 was in Lisbon in the Champions League final against Atlético de Madrid. Once Ramos had tied the final in minute 93 to send it into extra time, Bale headed it 2-1 into Courtois’s goal. A remarkable leap and a goal that paved the way for the final 4-1 scored by Marcelo and Cristiano Ronaldo.

The finals were the games in which Bale left his mark. The Welshman won five in Europe, but the one in kyiv, his fourth, will be the most remembered. He came off the bench and sentenced Liverpool with two goals to remember. The first was an anthological Chilean in which he beat Loris Karius. This is considered the best goal ever in European finals. The second was a very long shot that had the invaluable collaboration of the Liverpool goalkeeper.

Those four goals are the most remembered of the Cardiff Express who closes his stay at Real Madrid with 258 games and 106 goals on his resume, in addition to 60 assists. The one that leaves the lowest figures of a forward to remember as was the BBC formed by him, Cristiano and Benzema.

Bale’s contribution to his titles with Madrid

If something hampered his career at Real Madrid and prevented him from reaching the role he had reserved as top star after the departure of Cristiano Ronaldo, it was injuries. The Welshman accumulated several since his arrival with various problems in the soleus, this being an injury that has kept him out for up to 305 days in his career.

Some final seasons with less prominence mark the Welshman’s final stretch at Real Madrid, who came out on loan back to Tottenham during 2020/21. In 2019/20, his role change was confirmed, going from overcoming all 1,900 minutes to playing just 1,260, scoring three goals and three assists. This last campaign has been the one that has played the fewest minutes by far, playing 290, seven of them in the Champions League. In these he scored a goal and distributed two assists, all in the league.

His plans, once his stage in Madrid is over, go through qualifying with Wales for the World Cup in Qatar, an appointment that they have not reached since 1958. The Welshman has kept fit hard to arrive at this very special appointment prepared. If they succeed, he will look for a new smaller club to continue making history with his team, of which he is the top scorer and of which he is a few games away from being the one who has worn his shirt the most.

See also  Real Madrid threatens a Barcelona that is down

Gareth Bale closes an eight-year stage at Real Madrid, in which he has experienced extraordinary moments, but with some shadows.