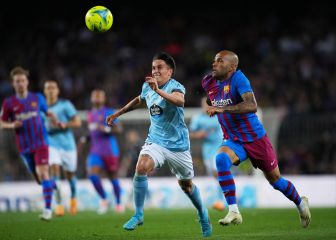 The Barça, without frills

Advantage for the azulgranas at the break in a first half in which, frankly, there were more goals than football. Xavi rehearsed with a luck of 3-4-3 that did not give him the expected performance, but Dembélé and Aubameyang were there to correct it.

The ‘Mosquito’ was invented, preceded by a fabled drive and a magnificent cut, a back pass so that Memphis Depay only had to push it. The former Arsenal player turned Néstor Araújo’s mistake into defensive work to beat Dituro again.

Celta had the 1-1 in a very hard shot by Thiago Galhardo, but Ter Stegen pulled an impressive hand down. The whole second part remains, nobody moves!

See also  Eintracht returns to Seville for its date with history