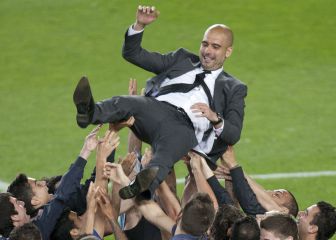 “I have worn myself out and I have emptied myself,” said Josep Guardiola Sala on April 27, 2012. Four seasons after landing on the bench of Barça’s first team and turning it into the best team in the world and one of the best in history, closed its cycle. For many, too soon. For others, at the exact moment due to the tremendous wear and tear to which he himself was subjected. Demanding to an almost obsessive level, Guardiola won 14 titles with Barça: two Champions Leagues, three Leagues, two Club World Cups, two European Super Cups, two King’s Cups and three Spanish Super Cups. But his Barça was much more than trophies.

Matches like the 5-0 against Real Madrid, or that Club World Cup final against Santos in which midfielders came out like mushrooms (Busquets, Xavi, Iniesta, Cesc, Thiago…) are among the best in the club’s history . Many more: 2-6 at the Bernabéu, the Champions League wins over Bayern, Arsenal, the 2011 Wembley final against Manchester United… Guardiola’s football proposal, always through 4-3-3, was bold. A modern football, with full-field pressure, with prominence from the wings, the interiors and the ends; with the genius of inventing Messi as a false nine.

Viewed with suspicion from many quarters when Laporta decided, thanks to the wise advice of Cruyff, who was the coach of the first team, Guardiola endured the first barrage of criticism when he lost on his LaLiga debut against Numancia and tied against Racing by fielding two unknown players, some Busquets and Pedro, then Pedrito. Since then, Barça has been a torrent of football. Surely one of the most envied in history. Guardiola, however, soon understood that he had such a large team with world-class figures of such caliber, that the wear would also be faster.. The ego of Messi, Etoo or Henry, the appearance after the haughty Ibrahimovic… That could be endured thanks to the gigantic figure of Puyol as captain and that core of youth squads led by Xavi and Iniesta first, also by Valdés, Busquets and Piqué .

Guardiola left and Barça continued. But it was not the same. His cycle ended up becoming the cycle of Messi, who is the one who transcended Tito, Tata, Luis Enrique, Valverde, Setién or Koeman. But except for the first two years of Luis Enrique, in which Barça, with nuances in style, also played at a very high level thanks to the recovery that players like Rakitic gave him in the engine room; and, of course, Neymar and Suárez at the top, the team never reached the levels of seasons like 2008-09 or 2010-11. In that last one, in the Wembley final, the one with the We love football mosaic, it seemed that that stage would last sine die.

But it was not like that. Less than a year later, Guardiola decided to leave. He started seeing things that he didn’t like; his relationship with heavyweights in the squad like Messi, Piqué or Cesc was no longer the same. “We will hurt ourselves,” was his phrase to say goodbye. The one that closed the circle after that of “tighten the belts”.

Time heals wounds, but Guardiola’s farewell was perhaps not the one deserved by someone who had once again changed the club’s history. It’s debatable. Guardiola needed his day and his glory space. But the club decided to give a feeling of strength, of having a structure and a plan. And Guardiola’s goodbye went into the background when, by surprise, Sandro Rosell announced that Tito Vilanova would be his replacement. An impact. That hurt Guardiola no matter how much Sandro Rosell gave him “eternal thanks”. The paths of Guardiola and Barça parted ways, surely forever if we talk about the coach-club relationship. Ten years later, Guardiola is still at the top, building exemplary teams that are a reference in the world. Barça is neither a model nor a reference.

See also  How much ETH will there be 200 years after the merger in Ethereum?