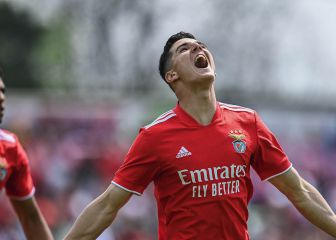 Clearly superior at the start of the game, with two shots and two goals in the first ten minutes, Benfica had to suffer afterwards to advance to the youth Champions League finalfor the expulsion of their goalkeeper Samuel Soares and for the reaction of Juventus with two great goals that established the 2-2, until penalties, with the last decisive shot missed by the Argentine Matías Soulé, of the Italian team.

On the tenth shot from eleven meters, the goalkeeper Andres Gomes guessed the intention of one of the great talents of the Turin team (before he had stopped another one against Turco, to alleviate another moment of concern for Benfica, because Nuno Félix had crashed his previous maximum penalty on the post) to lead his team’s pass, winner by punch and resistance. And by 4-3 in the penalties.

Infallible in his four semifinals, up to par in that number of duels in the penultimate round of the tournament against Barcelona, ​​Real Madrid and Chelsea, in the final it has always been the other way around, without a single win in each of the three he has played. Neither in 2013-14 (against Barcelona) nor in 2016-17 (against Salzburg) nor in 2019-20 (against Real Madrid). He didn’t win any of them. This is what he aspires to this Monday, either against Atlético de Madrid or Salzburg.

Benfica’s start this Friday was incontestable for Juventus, which they overwhelmed at full speed, between the pressure they promoted in the opposite field and between their formidable punch: ten minutes, two shots, two goals and 0-2 in their favor to unleash the euphoria of the many Lisbon fans in Nyon and to clearly convey to his opponent that the final would be nothing more than his thing, although really later it was not at all like that.

The 0-1 was at two minutes and 16 seconds, when he recovered a ball in the opposite area, because he pressed to get it. Luis Semedo took advantage of it and gave in to Martim Neto, who connected the shot towards the other post, with a good shot that was not reached by Senko’s lunge, who did not make a single stop when his team was already losing the semifinal by 0-2. Later, in ’84, he was crucial in supporting his team.

At 10, practically in the same position as his partner at 0-1, Luis Semedo made it 0-2 with a kick to the squad that was impossible to oppose. It could have been worse later, when the Portuguese team was already on the counterattack, when Moreira did the most difficult thing – driving and dribbling – and missed the easiest thing – the shot – when Senko already felt once again in a more than vulnerable situation.

But everything changed suddenly. The overwhelming difference until then, even after half an hour, even though Juventus already claimed their leading role with a shot off the crossbar, when they perceived their defeat much more clearly than any other result (nobody has won it in this edition of the tournament; not even the Malmoe nor Chelsea nor Zenit, in the group stage, nor AZ Alkmaar, in the round of 16, nor Liverpool, in the quarterfinals), admitted doubts since goalkeeper Samuel Soares rushed into a reckless exit that ended in his expulsion.

In the 35th minute, because he raised his leg too much (it is true that he touched the ball, as much as it later hit the rival, in a diffuse line between whether it was yellow or red), the goalkeeper went to the shower, with the red card shown him by the Dutch referee Allard Lindhoutto revive the hope of the Italian team, which resurfaced led by Soulé and with Chibozo 1-2, with an aesthetic volley to the squad from the edge of the area, with still 40 minutes to compete and discuss who qualified for the final European.

Even more so when, between the Portuguese resistance, another great goal from Turricchia, in the 72nd minute, with another volley that he lodged in the square of Andre Gomes’ goal at the exit of a corner kick, returned everything at the first moment, to tie (2-2), but with the substantial difference of the decisive numerical superiority of Juventus, at least until then. It wasn’t enough, because he couldn’t dodge the penalties, which qualified Benfica.