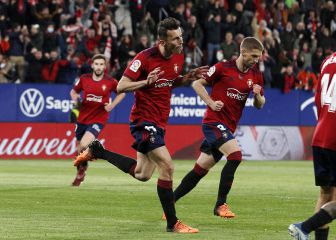 A goal separates Ante Budimir to write in gold letters your name in Osasuna. The Croatian striker wears five consecutive days marking. In the last game, against Madrid, he equaled the record for the “Chengue” Morales, in his power since 2004. No one in red history has seen the door in six consecutive games. That’s him challenge that chases Budimir, Osasuna’s most expensive signing, in the Martínez Valero (follow the match live on AS.com).

The battering ram threatens the state of happiness of Elche. Francisco’s team is in one of its best moments of the season. It is seen with stay in pocket and only one victory is missing for salvation to become something more than virtual. Two wins in a row, against Mallorca and Betis, have catapulted Elche, who hopes to certify their presence in the First Division for another year to kick off their next project in the elite. a plan that passes through the renewal of Francis. The man from Almería is confident that he will close the course well so that his continuity will be celebrated in style.

The Elche follow not counting Boyé. The Argentine striker, on Sevilla’s agenda, continues to be out, but the franjiverde team hasn’t done too badly without his ‘9’. supporting actors, such as Tete Morente either josanhave given a step forward to live in peace. Precisely, Francisco can reward Josan on the right side. The Crevillentino is emerging as one of the novelties.

For its part, slaywho still does accounts to dream of Europe, he has his entire squad at your service. Torro, absent against Madrid due to suspension, will regain his position in an eleven that is recited from memory and in which everyone look at Budimir. The Osasuna coach aspires to stay the highestor possible in the classification, although permanence achieved, he already thinks about the future. “A Braulio (sports director) already likes work in advance but the important thing is the stage and we can vary the stage in which we are going to be and we can work in different situations”, commented an Arrasate who hopes in the future: “That don’t leave anyone and if we can improve the team… better”.