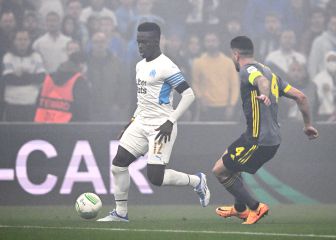 Feyenoord will play the Conference League final to be played in Tirana on May 25. In the first edition of the novel tournament, the historic Dutchman reached the last instance after barely suffering in the always complicated visit to the Olympique de Marseille field. With a pragmatic goalless draw, lSlot’s men considered the 3-2 won in the Netherlands as good and withstood the onslaught of a Marseille team that was orphaned after Payet’s injury in the 30th minute.

Unlike the first leg, which was a real street runner, the first half of the Vélodrome was much more contained than De Kuip’s match. Forced to react, Marseille took the lead in possession of the ball, but never seemed to generate enough danger to turn the tie around, at least in the first half. The clearest for the Marseille team was Payet, who took advantage of a great reception between the lines by Harit and ended up forgiving with his left leg.

Precisely, Payet’s injury coincided with OM’s downturn, which went from dominating Feyenoord to being dominated and entering a spiral of nerves that could very well have been a definitive blow in the tie. Slot’s men, much more conservative than in the first leg, had a very clear chance at Till’s boots, but his shot hit Gerson and prevented the Dutch from making it 0-1. Milik, who came on for Payet, had two header opportunities, but both ended up in the hands of Marciano.

Sampaoli, forced to react, decided to change the system with the entry of Pol Lirola for Gueye. From 3-2-5 in the first half, OM began to play with two strikers, Dieng and Milik, who pinned down the two opposing defenders and allowed Harit to constantly receive free kicks between the lines. With the Moroccan launched, Feyenoord fell back many meters and barely had enough to reach the Mandanda area, although not without intimidating their rival, who defended very far back, but with an excessive conviction in each extreme action. Feyenoord, without hesitation, endured, resisted with fury and pride and ended up qualifying for the final of the first edition of the Conference League history.