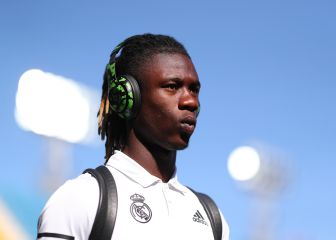 He has it quite difficult, and even so Camavinga does not give up in his efforts to convey to Carlo Ancelotti that he can count on him for Real Madrid’s starting eleven in the Champions League final, against Liverpool in Paris next Saturday, May 28. The former Rennes player, who in his first season in white has already won two titles (League and Spanish Super Cup) and who can put the finishing touch on it with a Champions League, vindicated his virtues against Betis, in Real Madrid’s league farewell.

Camavinga came out after the break and 45 minutes were enough to wake up the whole team after a discreet first half, being generous, by Ancelotti’s men. He took the place of Casemiro, a position that did not come naturally to him, and from there he directed the operations in defense and attack. He went for all the balls: he participated in 14 duels; Casemiro, at the same time, only three. And he ended up as the field player with the most recoveries in Madrid (7).

He was also fine with the ball: he gave 33 good passes out of 38; 22 of them were in the field of Betis. The only thing missing was to get closer to the goal, although he tried: he tried his left foot from the edge of the box, but the shot came out centered and without problems for Rui Silva to stop. His growth this season has been exponential: he started the course without much confidence from Ancelotti and past revs, receiving many unnecessary yellow cards; He ends it as a firm candidate to relieve one of the media of the medullary trident of the three Champions in a row.

See also  PSG wants to get rid of Sergio Ramos

However, he himself knows that the task, being a starter in the final against Liverpool, is very complicated, almost impossible if there are no injuries. Ancelotti has shown himself to be a coach with fixed ideas, he has a defined midfield, with Modric, Casemiro and Kroosand will bet on him, also probably supported by Valverde on the right (Rodrygo is the other candidate).

Until January, there were doubts about whether Madrid’s bet with Camavinga was a success; Ancelotti did not finish seeing him ready for eleven. But this final stretch of the course has shown the ability to play continuously (he is close to completing 2,000 minutes) and, in addition, an unusual ability to grow in high-intensity duels: He had quite a few minutes in the Champions League laps against PSG, Chelsea and City. In all of them he was decisive from the midfield, and even in attack, because the tie to one against City was born from his left boot, which Rodrygo would end up scoring from a pass from Benzema. However, due to his great projection, Camavinga asks to play more, as he has done in an interview in telefoot:

“I want to play more”

Great adaptation: “My record is still positive, although there are things I need to improve. There were great games, we won the League and the Super Cup: in general, it’s positive. When we won the Super Cup, I thought we were all going to jump for joy and everything. We celebrated on the pitch but later in the locker room everyone was normal. It is the mentality of the champion and that is what surprised”, affirmed.

On his arrival, he recounted what they told him: “I knew it was going to take time. That’s the first thing they told me when I arrived. They had warned me that the first year here is complicated. I took my problems patiently and kept working.”

“I don’t like not playing, I would like to play more, but it will come naturally.. Next year I’ll be at Real Madrid, I’m in for the long term, of course.”

Camavinga surrendered to Benzema: “Being with him every day is crazy. And what he’s doing right now is crazy. It helps us a lot. Frankly, I’m impressed. Every time I talk to someone about him I say: ‘He likes the ball’. Even if the ball is behind him, he will touch it and shoot it.”

Finally, he spoke about the Champions League final: “There is not necessarily a favorite for this final. Liverpool are also in a good dynamic, It will be something special in front of my family, it’s up to us to give everything to win this cup”.

Camavinga, by Casemiro or by Kroos

In Paris, his options would go through two positions, since Modric is fixed for Ancelotti and that, in addition, he is going through a sweet moment. Camavinga could act as a pure midfielder instead of Casemiro, a place that is not his innately, but for the one who has taken an accelerated course this season, led by Ancelotti who had a good command of the internals of the position.

The other option would be to relieve a Kroos who is not finishing the season at his best level. But the German is a sure thing in short passes, in long possessions, in making the opponent chase the ball. Especially important virtues against Liverpool, a team accustomed to turning duels into a constant back and forth; Madrid is interested in a slow clash, don’t get into an exchange of blows. If the time comes when he does prefer such a match, it is likely that Camavinga will have his moment in the final. Ancelotti knows, because he has already seen him this season, that he can count on him.