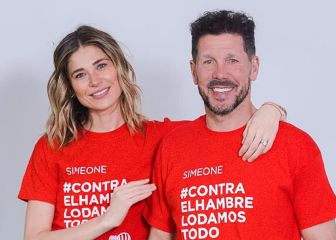 This happened in 2015, in the first year that Carla Pereyra and Simeone launched this campaign, ‘Against hunger we give everything’. They only had one last name, Diego’s, and they really wanted to, they all wanted to. To help, to contribute. Not to sit idly by. Seven years later not even a pandemic has been able to stop them and, hand in hand with the Atlético Foundation and the Red Cross, ‘Against hunger we give everything’ returns to the outskirts of the Metropolitan. It will be today, against Sevilla, in the last match of the rojiblancos in front of their fans this season. The Champions League is achieved, that classification that seemed so difficult at times during the season. But that is already. Now there is another. Carla Pereyra describes it in this interview with AS. And she gets excited. Looking back, she remembered that man who in the first edition came with his bag of rice, “or pasta”, the only thing she had at home, and she broke his heart. So this campaign collected 10 tons of non-perishable food. In 2021 there were already 36.

From 4:00 p.m. to 7:30 p.m., Carla and the entire Simeone family will be in a tent collecting non-perishable food to distribute among those who need it most. 161 clubs have collected food in four communities (Madrid, Castilla-La Mancha, Castilla y León and Extremadura), in addition to the financial donations collected at fundacionatleticodemadrid.com. Carla Pereyra is already excited. And that has not yet arrived today.

See also  Klopp: "Fabinho will be in the Champions League final"

-It’s already been seven years of ‘Against Hunger We Give Everything’.

Yes, it’s the seventh in a row.

Not even the pandemic could stop it.

-Yes. We created an account and made financial donations. It took another format and with the people it is the essence of this campaign. Against hunger we give everything. We are all. We are a community, a group of people who come together to help those who need it most. And, honestly, the face-to-face thing, what it has, is being able to see people’s faces. When he brings you food, when he arrives with enthusiasm to give you what he has, from the heart. To tell you nice words. Because the truth is that they always are, words with great affection, affection and consideration. Especially with Diego. Because in the end it is the commitment that people have with Diego. The affection that he professes for her, that he has for her, the respect. They only have words of affection, of admiration. It is created as a party atmosphere, as we come together for a good cause and that we are all in the same boat, to help the people who need it most.

-How was this campaign born?

-Diego and I have been together for almost nine years and always, I don’t know, I have a very supportive vocation. And the truth is that I told him when we started: “With the image you have, why don’t we do something of our own?” You have to commit. And thinking. Also with the help of Natalia (Simeone), Diego, such. And, to Diego, what always moves him the most is hunger and education. So, we began to think, to meet with different people, but always with the idea that we wanted to do it with someone who has credibility, who can help us with the distribution and, above all, that the food that we collected would really reach the that they really needed it, that it be distributed in a conscious way. And we met with the Red Cross, with the Atlético Foundation, and the truth is that we couldn’t have chosen better partners for this collection. And so we begin.

See also  which version of iOS for the best battery life?

-And the first one they raised…

-Ten tons. It was a match at the Calderón. And that day it was raining, and we said, we thought, “Well, no one is going to come.” It was late. And suddenly we began to see people coming, the rocks, the humblest people who were the ones who, in some way, gave themselves the most. And so we said, “This can’t stop. This has got to get better.” And you know that my husband is very challenged and the whole family.

-36 tons last year… And doing it virtually too…

-Yes, because, in the end, we were still like everyone else, a little cut off, but we couldn’t leave it, especially at the time when society needed it most, we can’t leave the campaign we had. I think we came out stronger, with the feeling that society supports us, expect this campaign. I have people who ask me when we are going to do it, people who are waiting for those foods. So, I know that it is a commitment that we have in the long term. It’s like a party. I really enjoy it every year. I’m taking the girls, my mother-in-law… all of them.

-The Champions is achieved. But this is another.

-Yes. This is the Champions of life.