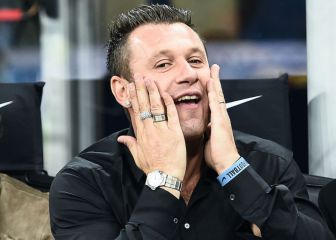 Antonio Cassano continues to provoke Carlo Ancelotti. The Real Madrid coach preferred not to answer the criticism of the former striker, who this Friday, on the Twitch channel ‘BoboTV’, spoke again about the coach in a very harsh way: “They questioned him about what I said and Ancelotti was fussy, he said ‘we all know Cassano’. That’s a lie, no one knows me, only friends and few people. In the world that is now only yours, and is no longer mine because I am not part of football, they are used to being lame asses, I am not.

The Italian reiterated his criticism of the madridistas’ game: “Carlo, what you had was luck against City, PSG, Chelsea, and many more teams in the past. You are a great coach, but you also have to make three passes in a row. Every time Benzema fixes the problems, or Vinicius like the other day, or a miraculous pass from Modric… You can not always go betting on the play of the proper name. Others have a thousand players, but they also play wonderful football”.

Cassano settled the issue claiming his sincerity to the Madrid coach: “If you’re picky I don’t give a shit… You’re nice, I appreciate you, but I have to tell you the truth. I’m not a fake like the others.”