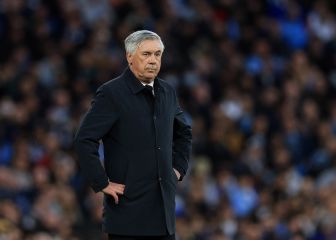 Did you enjoy the game?: “It has been something fantastic for football. We leave with a not good result, because we have conceded four… We have not defended well, but we have done damage. So the lesson for the second leg is to defend better. City is a very strong team, but we have competed. By defending better we have the key to go to the final”.

What has gone wrong in the defense?: “They play with five players behind the midfield line and they force you to help with a midfielder, because you can’t put the four defenders there. Two of the goals have been losses in individual duels, two crosses and there you have to We’ve had opportunities with the ball, we’ve handled it well, suffering a bit at the start because they pressed hard, but we feel confident for the second leg”.

Panenka by Benzema: “We have never considered changing the pitcher. He will have decided to change where to throw him because they would wait for him on the right and he has opted for the middle. We now trust in the magic of the Bernabéu. City plays very good football, but we have competed. The good thing is that we have scored three, the bad thing is that we have conceded four”.

See also  Life is good at Apple, according to this new study

Possible party on Saturday: “If we are capable of winning LaLiga, we will celebrate. And that will help us for Wednesday. I have no doubts.”

Then the Italian coach explained himself a little more at a press conference before the media.

Sensations after the first 15 minutes: “We started very badly. Too white. From then on the team has shown a great capacity for reaction. We were in the game until the end. We competed. The evaluation is clear: we have to defend better. We did well with the ball. For the second leg, defending better is important.”

Defeat with a different flavor: “It’s a defeat that keeps us alive for the Bernabéu game, we have the quality to create problems.”

What did you feel in the first minutes?: “It’s a bit frustrating. In the first half we lost a lot of individual duels. All this has happened and we have the match alive for the second leg”.

Proper names, Benzema and Modric: “Karim has played a great game. Great personality to take the penalty. He has shot it in a spectacular way. I have not removed Modric because he was not playing a good game. He has done very well, like Ceballos in the last ten minutes”.

How do you define the team?: “We have put a lot of energy on the field. We have played an open game because perhaps the rivals have gone ahead on the scoreboard. When they are open we compete better. If you defend better you win, if you defend like today you stay out”.

See also  If you have to use Ethereum, today is a good time to do it

Is the result the best? “When you lose a game it’s not good. It’s very different compared to the game against PSG. We’ve competed, we’ve fought. It’s quite simple. With the ball, very well. Without the ball we have to do better”.

Will Alaba and Casemiro be there?: “Casemiro sure. Alaba we will have to evaluate him. He has felt the discomfort of the last few games. I think we will have both of them for the second leg”.

Will the return be similar?: “It’s difficult to have a similar game. It will be a different game. City have an advantage, but it’s not big. We hope our fans will help us get to the final.”

Message to the fans: “You have to be ready. We are going to fight for another magical night.”

Benzema penalty: “We have never changed the penalty taker. He has trained this week. I didn’t know whether to shoot to the right or to the left. This shot surprised me a bit.”

Story Weight: “We have a team with a lot of experience. They don’t lose their heads. They’ve played so many games like that and they don’t give up. Their heads are always cold”.