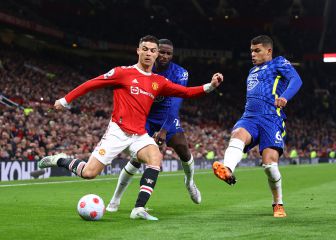 There was no way. Thomas Tuchel’s team controlled the match, he handled it at will and had innumerable occasions. Without a real need to add points, because the Londoners have a place in the next Champions League practically confirmed. He added eight points more than Tottenham, fifth, with five games to go. They should be more Chelsea did not pass the draw against a Manchester United that, certainly, is something else. Thinking about the next season. Around Old Trafford, the scarves already bear the face of Erik ten Hag, not Ralf Rangnick.

The Dutch coach will have work. He will arrive at a locker room that seems to have lost the desire for everything. To play, to compete and to live. Even so, the red devils endured the attacks of a Chelsea that is not going through its best moment either. It is likely that several players have their minds set on a future away from the club, such as Antonio Rüdiger or Andreas Christensen.

We had to wait an hour for the visitors to open the can. Reece James caused the umpteenth corner kick from the right. James himself caught a rebound and had all the time in the world to hang the ball back in the area. Havertz prolonged and Marcos Alonso scored what seemed to be a definitive goal. Nothing is further from reality. against prognosis, Manchester United equalized just two minutes later. Matic recovered a loose ball, missed by Kanté, and handed it to Cristiano Ronaldo. The Portuguese, as usual throughout the campaign, took the chestnuts out of the fire. He beat Edouard Mendy to scratch a point that still keeps him in the fight for the last place that gives access to the next Premier League. A point that is also worth putting an end to the losing streak of the Mancunians, who had just lost to Liverpool and Arsenal in performances very similar to Thursday’s.

See also  United States inflation in June was the highest since 1981, Bitcoin falls in price with the news - DiarioBitcoin