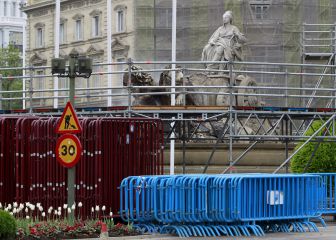 Madrid is one step away from lifting League 35, just one point, and there is no triumph without a visit to the goddess Cibeles. With one exception, the last league title, in 2020 with Zidane on the bench, where due to the pandemic the fans were unable to go to the monumental source of white success. On this occasion, already in a more favorable health situation, fans will be able to return to their usual place of celebrationalthough in principle the players will only celebrate at the Bernabéu and probably won’t go to Cibeles.

Preparations have already started and the fountain will be fenced from tomorrow night. A draw against Espanyol at the Bernabéu will be enough and the capital’s City Council is clear that, this year, the fans will resume the tradition. “We have no doubt that it will be civic and exemplary conduct, because the Madrid fans demonstrated it two years ago”said the mayor, José Luis Martínez-Almeida. The behavior of the fans was very outstanding, since they followed the sanitary measures despite the logical euphoria of the moment. Some 250 agents will be deployed to ensure that the celebration runs smoothly.

It will be the first time in 15 years that Madrid can win at the Bernabéu the domestic championship. Since the 2006-07 season, the popularly known as ‘the League of straws’. With Fabio Capello on the bench, the white team clung to games that seemed lost. Goals like that of Roberto Carlos against Recreativo de Huelva on matchday 35, his last as a madridista, which meant beating Huelva at the buzzer (2-3); the simultaneous goals by Van Nistelrooy at La Romareda and by Tamudo against Barça, which placed a double 2-2 on the scoreboard and left everything open for the last day; and the whites’ comeback against Mallorca with goals by Reyes and Diarra (2-1) sealed the title thanks to best goal average. So the joy, if the championship closes on Saturday, would be double.