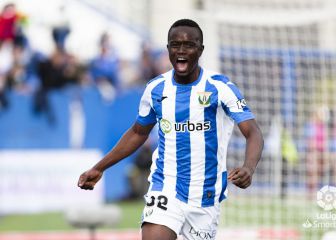 Cisse put Butarque in his pocket and got the ovation of his life when he was substituted in the 90th minute after two goalsIt’s that they turned around Valentín’s initial goal. Huesca saw how they came back and cut their good streak of results, with six games without defeats, and the bad season of the azulgranas is confirmed, as they are no longer eligible for the Playoff for promotion to the First Division.

Gerard Valentín invented a great goal that woke up a soporific game in Butarque. The winger signed from Lugo started from midfield and after several feints he surprised Dani Jiménez to put the Huesca forward. Leganés reacted and saw how the referee annulled Nyom somewhat for a millimeter offside. Just before the break in a strategy move the tie came, with a goal from Cisse that he finished free of a mark in the add.

At the start of the second half Huesca saw how a penalty against Escriche was annulled which was annulled for a previous offside. Then, Cisse’s second came in a set piece play which confirmed his arrival status. Those from Xisco looked for the equalizer and Gaich had the clearest. The Argentine received in the area with the ball controlled and without opposition and threw it out. A clear example of the I want and I can’t of Huesca during this course that leaves the Huesca without important objectives in the year after their time in the First Division.