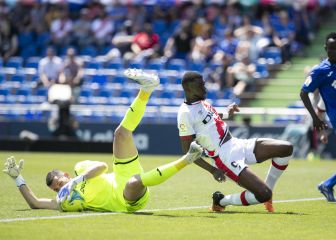 As soon as Sunday’s match against Rayo Vallecano ended, the faces in the Coliseum expressed sadness. The azulona fans expected to live a party and settled for a discreet game and a point that their team did not deserve at times. Jorge Cuenca expressed it clearly: “a bittersweet feeling.” With the passing of the hours that point has acquired value and Getafe looks to the future with optimism. On Wednesday he will have his first opportunity to mathematically seal permanence, something unthinkable a few months ago. For this, several combinations are worth it. The simplest would be to get one more point than Mallorca in their visit to Sánchez Pizjuán.

The key for Quique’s men to be just one step away from salvation is that in the last three games they have kept a clean sheet. When the tension and the rival have prevented them from playing brilliantly, the azulón team has closed its door and has added five points that have definitively brought it closer to its objective. The Madrid coach said it before Rayo’s visit: “We have recovered in terms of solidity, something very important for this group.” The collective commitment and the good performance of a regular substitute like Okay have been decisive for this.

On Wednesday Getafe will have another advantage. He does not have suspensions and recovers Mitrovic, so Quique will be able to line up his most usual eleven. Jaime Mata and Jonathan Silva are still injured. After Monday’s recovery day, the azulones only have one training session to prepare for the visit to Osasuna. After such a complicated season, everything is illusion to certify permanence at the first opportunity.