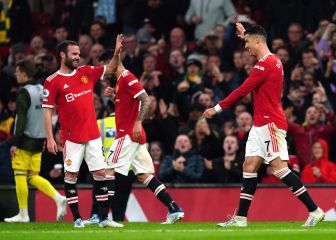 After a long-suffering season, Manchester United played for the last time at Old Trafford in a match that tasted like a farewell for the likes of Juan Mata, Nemanja Matic and maybe Cristiano Ronaldo, who led the Red Devils to a 3-0 win against Brentford. An exhibition that leaves United five points below Arsenal, with two games less than the Mancunians.

Ralf Rangnick’s team has almost impossible to qualify for the next Champions League, but that was not an excuse to see a great match at the Theater of Dreams, where United dominated the game from the start. Bruno Fernandes gave rise to the win in the 8th minute, after finishing off a play that began with a good sprint by Elanga.

The goal did not dislodge Brentford, who sought a reply with Eriksen as the instigator of all their attacks. However, the talent of United’s old guard overshadowed the Dane and before the break the score could have been 2-0. A millimetric offside by Cristiano only delayed the inevitable. So in the second half, The Portuguese was in charge of completing his exhibition by provoking a penalty that he himself would shoot to make it 2-0.

Mata and the Portuguese striker were having a great time, but Raphael Varane also wanted to join the party and in the 80th minute he scored his first goal in a United shirt. A corner in which the Brentford defense failed and the French center-back fired at will. The Old Trafford stands celebrated enthusiastically, but did not forget to protest earlier, in the 73rd minute, against the club’s owners, the Glazers, whose management has been heavily criticized in recent months.