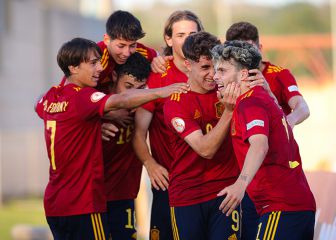 A problem has broken out for Julen Guerrero, one that he will surely appreciate. The competition to gain a foothold in the eleven in the European Under-17 is very high and players who in the first two games against Turkey and Belgium had had fewer minutes, such as David Mella, Deportivo winger, Álvaro Ginés, from Real Madrid, and goalkeeper Ferran Quetglàs, from Mallorca, showed against Serbia that they are in top form to be part of the team when the U-17 coach deems it necessary. Also Pol Fortuny, Madrid midfielder, and Simo, Espanyol central defender, who a priori did not arrive in Israel with the starting lineup, have proven to be one of the most plugged-in players of a team that dreams of reaching the top of the championship.

David Mella (Santiago de Compostela, 2005) was La Rojita’s best player in the third game of the group stage. The Galician winger scored the goal for Spain with a right foot, his bad leg, from outside the area and was really active on the left wing, through which almost all the danger of the National Team came. A colossal performance to celebrate in the best possible way the day he turned 17. His problem is that Dani Rodríguez, from Barça, plays in his position, another pearl who has stood out enormously in the group stage, in which he has scored a goal and distributed two assists. A formula to fit both is to change Dani from the band, something that happened in the last minutes of the match against Serbia. We’ll see what happens against Portugal in the quarterfinals.

See also  This is the First classification and this is how it would be without the VAR: 35th matchday

Álvaro Ginés has a similar problem, who plays in the position of Iker Bravo, Leverkusen striker, who is sweet (two goals in the first two games). Simo also started the European Championship as the third central defender, behind Boñar, team captain, and Yarek, from Valencia, but he took advantage of his minutes against Belgium and Serbia and it is difficult to imagine the Spanish defense now without him. Be that as it may, Julen must be happy. He knows that none of his ‘his problems’ is going to fail him.