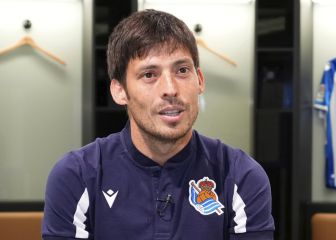 David Silva will continue wearing the Real Sociedad shirt for one more season, after the announcement of his renewal until 2023. The Canarian player has left his impressions on the Real Sociedad website. “I’ve had two very good years here and we want to end this one by also qualifying for Europe. We are playing great games, playing very good football… Going on for another year makes me happy and content”, says Silva, who makes it clear what the reasons for his contract extension have been. “Before coming he already knew that the Club was doing well. The team played football well, with Imanol’s style. It is growing a lot and being in the fight for Europe every year is very good. I have felt the work that there is both in the Club and in the team, a lot of work is done and that is a philosophy that I have always had in the teams in which I have been and here I have continued with it”.

Nor does Silva forget the personal aspect, which also has its fundamental role. “My family is very comfortable here and when you go out the people are charming. In two years I have made many friends and that has been an important aspect to continue. They make you feel at home and that makes everything easier”. The Canarian hopes that his renewal and the arrival of important players will change the image of the club abroad. “When you start to be at the top for so many years, the players want to come and that’s good for the Club. Having people who want to come and contribute is good for everyone“, He says. Silva is now very focused on the five games remaining for the end of the League, with the European goal on the horizon. “We have to continue in the same dynamic, game by game, giving everything. If we continue as before, there are many options to get into Europe”, he says.