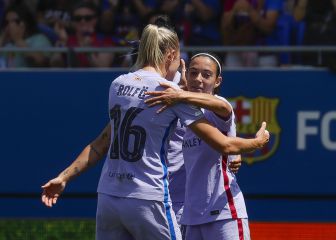 DAZNthe leading global platform for streaming sports, has announced this Tuesday several agreements to sublicense television broadcasters around the world, including RTVE and TV3, the rights to the final of the Women’s Champions League between FC Barcelona and Olympique de Lyonwhich takes place this Saturday (7:00 p.m.) at the Juventus Stadium in Turin (Italy).

These agreements include RTVE and TV3 in SpainITV in the UK and Ireland, TF1 in France, RTBF in Belgium, SVT in Sweden, NRK in Norway, Sport5 in Israel and RUV in Iceland, as well as other alliances to be finalized “in the coming days”.

The CEO of the Group DAZN, Shay Segev, stated that guaranteeing the broadcasting agreements for the final with the main television stations in those countries reiterates the company’s “commitment” to “increase the visibility of the competition” and to promote “the growth of women’s football in general”. “We are proud of our long-term commitment to contribute to its global growth. Increasing visibility and access to women’s sport is critical to driving larger audiences and attracting fans, and ultimately to closing the gap in investment and coverage. between women’s and men’s sports,” he stressed.

See also  Superliga: The Luxembourg Court will see the 'Superliga case' in a month

the spanish player Vero Boqueteambassador of Common Goal and current player of the Fiorentina, will be part of the broadcast with Rafa Escrig, who will act as presenter. They will accompany you as storytellers Andrea Segura and Sandra Sanchez Riquelmewhile Barbara Quesada will make comments on the field.

See also  Leipzig falls out of the Champions League

In addition, on the occasion of the final, DAZN will offer special content such as ‘The Replay’ -where two players will relive one of their ‘Champions’ finals; in the first episode, Wendie Renard and Melvine Malard in 2011, and in the second, Mapi León and Ingrid Engen, that of 2021-; ‘Route to the Final’ -from interviews with players like Alexia Putellas, Caroline Graham Hansen, Jenni Hermoso, Christiane Endler, Lindsey Horan or Delphine Cascarino-; or ‘Tunnel Vision’ -content ‘behind the scenes’ in which the players talk about their superstitions and routines before the matches-.