In the first half of 2021, the Institute for Research and Advertising Studies (IREP) revealed that digital advertising grew by 42%.

While digital has been very successful during the Covid 19 health crisis, advertisers have abandoned TV spots and radio to favor advertising on the Internet: the Paid Media.

Deemed to be more effective and profitable than traditional advertising due to its targeting and tracking capabilities, in this article find out what paid media is and the steps to get started.

“Paid media” refers to buying digital advertising space in order to gain visibility with a qualified audience quickly. This space purchase is made on the main online media and allows total control of the advertising budget and targeting as well as precise monitoring of the effectiveness of the campaign.

Paid media can take different forms: advertising on social networks, advertising in search engines, display, partnership or sponsored article. The most famous platforms for launching a campaign of this type are Google Ads and Facebook Ads. Many brands mainly use this lever to increase their notoriety and develop on the Internet because this practice is more efficient and less expensive than buying traditional space such as TV spots or billboards. Indeed, platforms such as Google Ads and Facebook Ads allow very precise targeting of the audience unlike traditional media where the distribution of advertising is done in mass.

See also  6 points to ensure your visibility on social networks

The company which decides to cover in paid media will be guaranteed to have complete control over its communication. Indeed, the platforms that offer paid media do not impose any conditions, whether on the format, the budget or the duration of the campaign. The company is therefore free to shape its paid media campaign as it sees fit and retains control over:

The principle of paid media is to pay in exchange for being promoted to a targeted audience. As a result, paid media provides immediate visibility.

However, the monetary concept must be taken into account for the purchase of space. Some spaces can be more efficient and provide more visibility, so their cost will be higher.

Just like providing visibility, paid media can generate immediate sales. But on condition that:

How to create a paid media strategy?

A paid media campaign can therefore prove to be very interesting. However, its effectiveness is only optimal if a strategy is established upstream.

Define the objectives of the paid media campaign

Like any good strategy, a paid media strategy must have objectives to achieve. These may vary:

Depending on the objective set, the paid media strategy will follow different axes.

Paid media is mainly based on the purchase of space, clicks generated and conversions. Although the budget and the duration of the campaign are fully controllable, it is important to set a precise budget to subsequently define the best distribution channels to favor and calculate the ROI at the end of the campaign.

The study of the persona is the key to any digital marketing action, because it allows you to better understand the target audience:

Thus, the study of the persona makes it possible to refine the paid media strategy and to take concrete decisions.

Many online media offer paid media actions such as:

The choice of the preferred channel and the format of the promotion must be made according to the objective of the campaign and the study of the persona.

Define the message to convey

As with the choice of the paid media channel, the definition of the message must be done according to the objective of the campaign and the target audience.

The message must also adapt to the platform on which it is delivered. This principle applies all the more if the campaign is carried out on the networks.

Once the campaign is ready, it is important to test it for a while with a small audience in order to verify that its targeting and that its message are correct. Of course, each element should be tested independently so as not to create confusion.

This is called A / B testing and it is important to devote a small part of your budget to it.

Paid, owned, earned media: what are the differences?

The “paid”, “owned” and “earned” media are three distinct terms that should not be confused. Paid media, as it has already been defined, refers to the purchase of advertising space on different digital media. This type of action is effective in reaching an audience quickly, but it comes at a cost.

the owned media (“Owned media” in French) means a medium over which a company has complete control, such as a blog, an emailing list, a Facebook page or an Instagram account. The goal of earned media is to publish free content in order to provide value to its audience. Here we will talk about content strategy and Inbound Marketing, two complementary disciplines that will allow content to attract prospects.

Earned media refers to the fact of appearing on the media of another such as in a guest article or a press article. Here the company does not have 100% control of the media since it does not belong to it, but it benefits from exposure to a committed audience without necessarily having to provide financial compensation. Earned media is a very common practice in natural referencing, but it is also very effective in increasing the notoriety of a brand or a personality. Appearances on podcasts or YouTube channels are good examples. 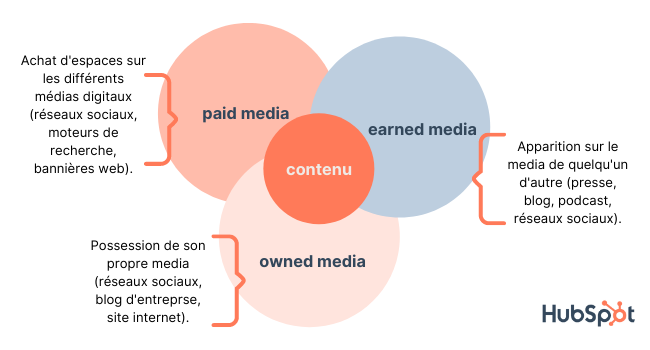 This article has just presented what paid media is and how to get started. It is important to keep in mind that even if paid media brings immediate effects, you should not devote your entire digital strategy to it. Indeed, it is relevant to vary the acquisition channels by carrying out both paid and natural actions (that is to say without advertising).

To go further, you can consult the article “Digital marketing campaign: 12 steps to success” and download this free guide forfind out how to set up a social listening effective.