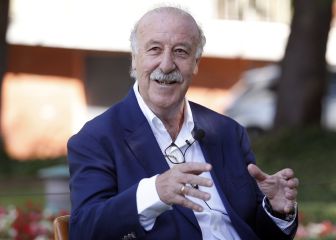 Course 80-81. It was his eighth consecutive season at Real Madrid. He already knew what it was like to win Leagues (five) and Cups (three) –he would later win a fourth– but his generation resisted European competitions, especially the European Cup, the quintessential tournament that so many late-nights of glory had given to the white club. That “seventies” Madrid reached two semifinals (1976 and 1980), but Bayern and Hamburg gave him the door of the final in the face. He even experienced the bad experience of not playing any continental competition for the first time in the club’s history (1978).

It’s never too late, he was already 31 years old, Vicente del Bosque thought to himself when between throwing fences, chairs and any object that could be sent through the air, Real Madrid qualified for the final of the ‘Orejona‘ in a passionate San Siro after valiantly resisting Bergomi’s Inter, Prohaska, Beccalossi and Altobelli…

“We were finally going to play a European Cup final and in Paris, no less. We looked at each other and we couldn’t believe it. That Real Madrid of ours went through a difficult period financially and the situation was passed on to the team Since 1966, that of the Yeyes, no other final had been reached. 15 years. It was an immense joy for everyone.”

Vicente speaks of the lost final of 81 against Liverpool with naturalness. It is not very nostalgic for this type of anniversary and just as it does not magnify victory, it does not dramatize defeat either.

– Where do we start?

– At the beginning… because of what I told you before. It was a great merit for that team to reach a European Cup final. The club was going through a gray, complicated stage… For the entity that final was the milk. Those were times of few signings, of pulling from the quarry out of necessity. How would not be the situation that gave us premium even losing. Don’t ask me how much, because I don’t remember, but Luis de Carlos told us when he entered the locker room after the final. They knew well what we had done with that team. The bonus was the reward for having reached and played the final.

– It was a domestic Madrid.

– The staff was made up of people from the house and a few from abroad such as Juanito, Santillana, Ángel, who came from Salamanca, García Navajas, from Burgos… Unlike now that, out of 11, nine are foreigners, then we were nine Spaniards plus Uli (Stielike) and Laurie (Cunningham). Just the other way around. They called us the Garcías… (García Remón, García Navajas, García Cortés, Pérez García, García Hernández…) And it was an honor for us. In the starting eleven in Paris there were five from the academy: Agustín, Sabido, García Cortés, Camacho and myself. Then Pineda entered, at the end. Also in the squad were García Remón, Gallego, Pérez García, Isidro…

That was a gray and austere time at the club, on the pitch, we were nine Spaniards and two foreigners, now it’s the other way around

– I remember the two semi-final matches against Inter. We had a great game at the San Siro. We suffered a lot, but the team stood up, resisted. At the Bernabéu we beat them well, 2-0 with goals from Santillana and Juanito. How not!

– Four decades have passed since then, how have you internalized the match in your memory?

– I think we put ourselves too much at their service. We changed the way we play. Normally we were used to attacking, opening up space on the wings. We always went out to win as the titles we won showed, even in those years. Uli used to play on the right, I in the center and Ángel a bit on the left, but also on the inside… That day we changed a lot. Camacho jumped into the midfield to mark Souness and everything was turned upside down there. I played almost as a right back paired with Ray Kennedy, who was a player of my characteristics, very technical, corpulent, not very fast… Uli was also man to man against Sammy Lee, who later signed for Osasuna… Or I don’t know if it was them the ones who put the redhead on him because of his physical strength and because they knew that Stielike was our engine.

Yes, a mess, a mess… And more things. Angel, I think, that came out on McDermott. García Cortés did not separate from Dalglish. He didn’t let her touch one. But that was already more normal, it was defense against striker, his best striker, too. We never used to mark the man so much, although it is true that we used to adapt a bit to the opposing team, but that day we went too far…

– And that the great occasion of the match was Camacho’s…

– Yes, he stole a ball in the center and went forward and bounced the ball over the top. He narrowly missed him. He says now that he should have continued with the ball a little longer… but he saw it clearly. The game was bad, bad. It has to be said. It was a draw if it wasn’t for that goal… which was scored by the player who was the least popular in Liverpool, his left back, Alan Kennedy. Soccer stuff. There were very few scoring chances. The grass was bad, it had little mounds that we all stepped on. He had played rugby a few days before. He bounced the ball badly.

– What could have happened to Boskov that day? He was not a coach with such a defensive profile either.

– No, he wasn’t, but he saw things that way. He was a good coach and a good person. Although he was Yugoslav he was nothing like Miljanic, whom we had a few years before. I have the image of Boskov with the suit, the blackboard and the chalk in his hand, explaining Camacho’s marking, what he had to do.

– The favorite was Liverpool, although it was no longer the one from the late 1970s that had won two European Cups and one UEFA.

– Yes, that’s how we recognized it then and now with the perspective of the years that have passed, too. They had good midfielders: Souness, McDermott, Ray Kennedy… and then Dalglish.

– Let’s go to the present. Although I am aware that he is not very keen on talking about the final on Saturday to avoid misunderstandings and because he does not like to play guessing games if I do not ask him, I am blown away.

– All finals are unknown, the one in ’81, the one last year, this one… That’s why I try not to talk before the games. To speak, a priori, of favourites, percentages… is to speak for the sake of speaking. Speculate. I do not like it. The only thing I can say is what everyone has seen and knows, that both teams have had a great season. It seems that, in moments of greatest difficulty, the one who has responded best is Real Madrid, but Liverpool also did so in times of trouble, like against Villarreal, who got the best of themselves… I saw him against Southampton, he suffered, but he knew how to suffer to win with only two starters. That says a lot about them as a squad. You see, in the end you can’t talk about favorite. If I have to say one…

For this final I don’t like to talk about favourites, but put Madrid on because of their great ability to react at all times

– Of course, name Real Madrid for its great ability to react at all times of difficulty. It’s been three incredible qualifiers. He has been eliminated in all three and at various times and has managed to get ahead. He has fought against everything and has come out ahead. It has a good team, with experience

– Who does Liverpool stay with?

– He has everything… Salah, that’s good, Mané… too. They are rare players, very individualistic, but from that individualism they do a lot of good to their team and a lot of damage to the opponent. They are one of those who unbalance by themselves in any play, it seems that they disappear from the game, but they are always there. The central couple is guaranteed no matter who plays alongside the Dutchman (Van Dijk). That is very good too.

“Camacho follow Dalglish to the toilet and then flush the toilet”

Bring out your inner coach and define your teammates one by one.

– Mariano (García Remón) played more but in the final it was his turn. He was already an extraordinary goalkeeper project. He had all the conditions. High. Brave.

– Good defense. Strong. That day he played right back and he is left-handed. He must have had a hard time, but he didn’t show it.

The classic central youngster, trained in the quarry, with anticipation, strong.

– Came from Burgos at the age of 21. He became a player at Real Madrid. The innate conditions of the center.

What am I going to say about Jose? When the opponent had a good one, Boskov liked to put a man on top of him and he explained it to us. “If necessary, go with him to the toilet bowl and then pull the chain…”. It was one of his phrases. Camacho was not afraid of anything. He marked whoever he had to mark.

He was from Huelva, but we signed him from Salamanca. Worker, tireless, resistant, very continuous. He always at the service of the team. Reserved. If you got on the bus after the game, you didn’t know if we had won or lost because of his face.

He was the one who carried the weight of the team in midfield, but his position that day did not allow him to play as he did. He was always the freest midfielder, Ángel and I contained more.

It almost didn’t come into play. Rare for him because he was one of those who moved a lot and looked for the ball. He never hid, but that day he lost a lot of balls… I think I remember.

He could do little with the little that the team attacked. A striker without balls has no food.

He came from an injury and was half lame, but the coach trusted him and put him on. There was little man could do…