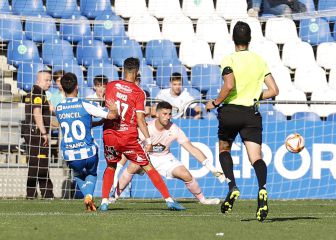 Deportivo and Unionistas bid farewell to the regular league in Riazor with different, almost conflicting objectives. The one from Coruñeses passed by not risking anyone in the slightest thinking about the playoff and giving the second unit a chance to vindicate themselves. That of the Salamancans was more terrestrial: win and hope that the results of the day would accompany them to reach the promotion promotion. And the charros fulfilled their part of the work with a goal from a Rayco who last season played for blue and white. But the expected carambola did not comewhich does not tarnish in the least the great season of a club and fans worthy of admiration. for the sportwhich ended with three juveniles, his match really started when he whistled the referee the end. Moment in which the coruñeses They asked about Group II, about the rival they expect in the playoff, which will be Linares. And that was already seen on the field, with the sports team and the stands dedicated, already thinking about what to expect.

as advertised, Borja Jiménez opted for a massive rotation. A renewal so profound that Bergantiños and Lapeña were the only starters usual, the warned Quiles and Miku did not even sit on the bench and Granero played inside. Ayllón, how could it be otherwise, came out with everything. The sum of factors he designed a controlled game, with arrivals in both areas, but with both unprecedented goalkeepers. The first serious test came after half an hour at the hands of the two players with the most spark. Doncel’s center and Soriano’s header in the race almost at point-blank range that Salva managed to neutralize. The serious was left for the last seconds of the first half. first with a good shot to the stick of Espina and great save by Pablo Brea to De Miguel’s shot after the rejection. Immediate response from Depor, with a left-footed shot from Granero that Salva cleared again. Almost 44 minutes of peace, one end of war.

Unionistas, in need of victory, moved up a gear at the start of the second half to find the goal. More momentum and faith in search of the rival goal, but also more space for the Coruñeses when they surpassed the center of the field. And in one of those transitions, the inspired Soriano was left with honey on his lips when in the 61st minute he hit the post after a good drive. The former sportsman Rayco had the greatest aim, when at 69 minutes he was left alone against Pablo Brea to sign the 0-1. Delirium of the 350 charro fans in the stands and ears to the transistors to wait for the dreamed carambola. But this did not come, the same as the reaction of a Deportivo that ended up on the field with the youth Noel, Yeremay and the debutant Brais Val to finish a Saturday process.