36.1% market share : here is the score obtained by the Apple Watch brand in the smartwatch market in the first quarter of 2022. A figure to be compared with the 35.9% of last year in the same period, when it was still the Series 6 which acted as a standard bearer for Cupertino.

This model has since left the shelves of Apple Stores, and is only available from third-party retailers. Instead, the manufacturer now offers the Series 7, an improved version with notably faster charging than before, but also an enlarged screen and narrower edges for more visual comfort.

Samsung on the rise

In second position of these estimates signed Counterpoint Research, we find without great surprise the company Samsung. The Korean thus achieves 10.1% market share according to the study, against “only” 7.8% between January and March 2021. A good growth that we owe in particular to the success of its flagship accessory; the GalaxyWatch.

The Samsung Galaxy Watch is available from 319 euros, with a 30.4mm circular dial and up to forty hours of battery life on paper. The device, published in several colors, is also equipped with 16 GB of internal storage for 1.5 GB of RAM and runs on Wear OS, the open operating system from Google (Alphabet). 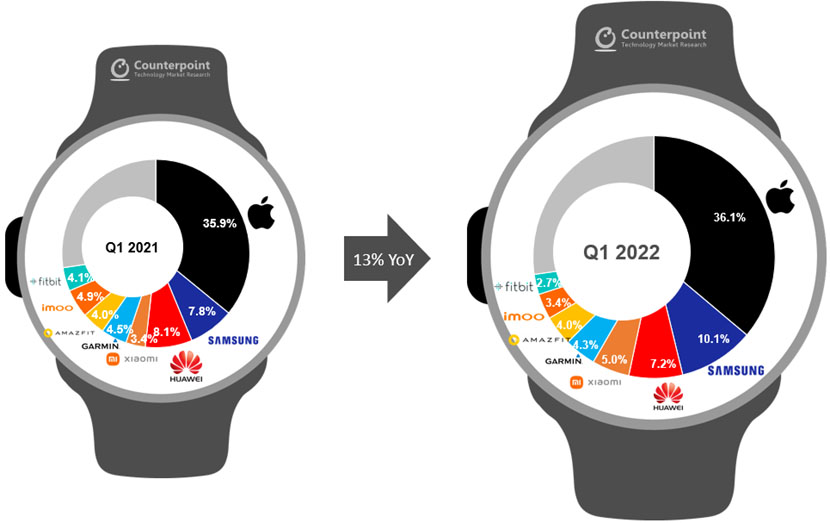 Garmin and Fitbit are losing gallons

Among the big losers in this ranking, Fitbit is surely the worst off since its bracelets have quickly lost value in just a few months. It’s hard to explain this tumble, but the acquisition by Google and the slender democratization by Apple since 2015 may have something to do with it.

And you, what is the model of your connected watch? Do you plan to buy one in the next few weeks? When WWDC 2022we should have a taste of what Apple has in store for us in this area with the arrival of a new version of watchOS.