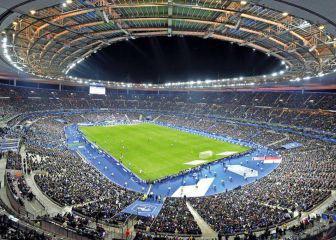 Before a notary public and broadcast live on television, this is how the real Madrid the draw to decide what 14,547 partners They will have the fortune to be able to see the Champions League final, between Liverpool and the white team, on May 28 at the Stade de France. 18,848 requests had been received, but since each request could contain several entries (up to a maximum of six), the total number of members who had signed up for the draw amounted to 59,622. Finally, the winners were the requests (not member numbers) between 17,605 and 3,119 (upon reaching 18,848, the wheel starts again from 1 and from there, to 3,119).

This final is assuming a mobilization with few precedents, brutal. To give an example, for the final in kyiv in 2018, 24,268 tickets were requested in 8,581 applications (46% less). The proximity of Paris and the euphoria of how we got here has aroused a lot of interest in the fans, to the point that hundreds of fans have already made pre-reservations at hotels with the option of free cancellation, just in case. Numerous clubs have been reserving buses, even private vehicles, for days to travel on the weekend. As AS toldalmost all the associations are outlining their departures around 9:30-10:00 p.m. on Friday to arrive in Paris early in the morning.

The 14,547 tickets that have been awarded in this morning’s draw correspond to 81% of the total that Real Madrid has, amounting to 19,618. And what is going to be done with the remaining 19% of the tickets? They will be distributed as follows:

– 148 seats for members with reduced mobility

– 1,000 locations for clubs (national and international)

– 255 locations for the Board of Directors (15 per director)

– 300 locations for the women’s and youth soccer sections

– 100 locations for the Basketball section

– 450 seats for sponsors and sponsors of the club

– 100 seats for the Real Madrid Foundation

– 800 locations for club employees (according to agreement)

– 218 locations for Protocol and Institutional Relations

there will be no fan zone

That… for nowalthough the organization and the government of Paris are in time to change their decision. As of May 11, there will be no fanzone and no giant screens will be installed in the streets of Paris. The trophy itself will be exposed to the public from May 26 to 28 on the esplanade of the Hotel de Ville. Meanwhile, in the Place Victor Hugo, in the Saint-Denis neighborhood, a giant replica of the Champions League trophy will be located. Yes there will be various free activities both in Paris and in Saint-Denis, where the stadium is located.

And will there be something in Madrid?

Yes, the club will finally install giant screens at the Santiago Bernabéu and it will open the doors so that people can experience it in the stands, as has been done in past editions. The state of the works had kept this decision in suspense, to such an extent that possible alternatives had been contemplated. Plan B would have been to move it… To the WiZink Center! Where Madrid usually plays its basketball games. The option of Valdebebas, the MadCool stage (it is located just in front of the Ciudad Deportiva) or Di Stéfano was also considered. But finally, as announced after the draw, the Bernabéu will be open to Real Madrid fans.