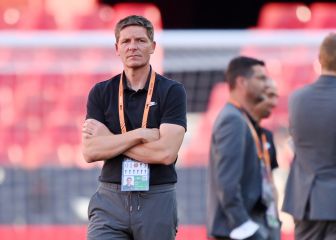 Oliver Glasner, coach of Eintracht Frankfurt, assessed the preview of the Europa League final that his team plays this Wednesday against Rangers at the Ramón Sánchez-Pizjuán: “We came to this final with great pride and confidence in the players, and I think very prepared for this match. The last training session was very good, with very good feelings and I think everyone was very focused”.

“Both Rangers and Eintracht are teams that play with a lot of passion and a lot of support. The whole of Europe is going to enjoy this match tomorrow. The favorite doesn’t matter, both teams deserve to be here”, added the Austrian coach, who confirmed that among the many injuries he has, he is recovering a footballer for the match, Danish midfielder Jesper Lindstrom. “It’s fine, he completed the last training session before of the end. I don’t know if he will play from the start or start on the bench.”

The coach defined Rangers in an original way: “It’s a bit of a mix between West Ham and Barcelona. The influence of a Dutch coach is noticeable, he likes good football. But he also has a certain British mentality.”

Glasner returns to Seville, where he has already beaten Betis in this Europa League. And for the third time to Spain in this tournament, because he also eliminated Barcelona in the quarterfinals: “I usually come to Spain on vacation, so I love this place. It’s a good feeling to be hereuí, I like tapas and the stadium is fantastic, also the grass. And we also beat two Spanish teams (Betis and Barcelona) in the previous rounds.”