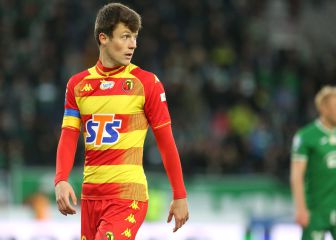 If a couple of months ago someone had told Marc Gual (Badalona, ​​1996) that his first goals abroad would have to play in Poland, he would not have believed it. And it is logical. Because the Catalan striker decided to undertake his first adventure outside of Spain, but he did it with the idea of ​​playing in the Ukraine. The war, however, changed his plans. “I signed for two and a half years with Dnipro-1. I did it with an eye to the future because I knew it was not going to be important from day one. Although the starting striker was injured in pre-season and he was going to start playing. third and the team played very well. I had high expectations for my time in Ukraine”, discovers Gual. Everything was blown up on February 24, when Russia decided to attack Ukraine: “I was sleeping and a very loud noise woke me up. I didn’t know what was happening. I got out of bed and heard another noise. Then I looked out the window and I saw fire. There I thought: ‘Okay, here’s a problem.’ They were the first bombs that fell on Dnipro. All teammates got together and took refuge in a bunker.”

Marc Gual narrates film stories. The only difference is that, in his case, everything is real. “We went to sleep in a hotel owned by the president of Dnipro-1 and when we got up we had a tank and a military convoy at the door. These are moments when you think: ‘Careful’. I saw things that I couldn’t tell the family at the time so they wouldn’t worry. Like if we didn’t pay the military we couldn’t leave the country. We gave them all the cash we had,” recalls Gual, who fled Ukraine across the border with Romania, along with Izan Martín, a Spanish physical trainer, and other foreign colleagues. The Ukrainians had to stay. He left them behind with sorrow, but also with the obligation to continue with his sports career, which is how the possibility of joining the Polish Jagiellonia arose. “It’s not easy to call a person who is in a war and say, ‘Hey, I’m really sorry, but I want to terminate. We speak daily with the club and at the end. As UEFA allowed other clubs to sign us even though the market was not open, I left on loan”.

Only a border separates Poland from Ukraine, but the situation of the last two countries in Marc Gual’s football life is totally different. In the Ukraine, every day is marked by bombs; in Poland life is totally normal. There he smiled again. And to mark. “I couldn’t have started better. Two goals in two games. The truth is that I landed on my feet in the Ekstraklasa,” says Marc Gual, who only needed a few days to become the new idol of the fans of a needy Jagiellonia. “The Jaga didn’t have a striker, but now they do. He has proven to be infinitely better than other attackers in the competition”, values ​​the Polish journalist Paweł Ożóg after being consulted by AS. “I didn’t have the idea of ​​playing 90 minutes in my first three games with Jagiellonia either. I was hoping to get in little by little because I hadn’t played for a while. But the coach trusted me and things are working out,” adds Gual, who warns: “Now the fans have me on an altar, but you don’t have to get too high and keep working. In football, everything can change overnight”.

When Marc Gual arrived at Jagiellonia, the Bialystok-based club were eyeing the bottom of the table with concern. In his first two games with the red and white shirt, the Spaniard scored two goals that meant four points, which will allow them to face the end of the season more calmly. “What has surprised me the most is that the matches are very physical. There is a lot of contact and people are very strong. The Ekstraklasa is a very interesting competition. The teams always seek to attack and that works very well for me, as a striker.n”, defines Marc Gual, who has already been asked by the fans to continue next season: “It’s something that doesn’t depend on me. It’s in the hands of Dnipro-1 and what happens in Ukraine”.

“I look at my resume and think: ‘I will not be that bad'”

After six years in the Second Division, Marc Gual understood that “going abroad was the best option to grow and be a top player”. The Catalan striker went through FC Barcelona, ​​Espanyol, Sevilla, Real Zaragoza or Real Madrid and has been an Under-21 international, but has not yet been able to fulfill his dream of debuting in the First Division. “Barça signed me as a youngster and I was even a cadet. It’s hard not to be very much a Barça fan when you play there and I was upset when they told me they didn’t count on me, but I learned a lot and going back to Badalona helped me improve”, recalls Marc Gual, who, when he looks at his resume, thinks: “‘Holy shit! I won’t be that bad.'” “It is true that I have not managed to settle in the first team of any club, but eating my head thinking about it is not going to help me at all. I learned the most. I am much more mature and I am capable of handling any situation that occurs in the locker room or on the pitch,” he adds.

During his time at Real Madrid Castilla, Marc Gual was managed by Raul Gonzalez Blanco, “a very calm coach who has very clear ideas”. “What makes him especially good is that he only needs to look at you to know what you are thinking. He knew what each coach needed at all times and how to help him. I don’t know if he was at Real Madrid, but in two or three years he will train in the First Division and he will finish having a great career”, adds Gual, who scoring 14 goals in half a season with Sevilla Atlético allowed him to be part of one of the most talented Under-21s of recent times. “When my agent told me that I had been called up, I told him not to hesitate. In the first two training sessions I didn’t look at the ball, but at the players. I thought: ‘What am I doing here with all these?’. Rodri, Merino, Soler, Oyarzábal, Ceballos… Celades told me that if he was there it was for a reason and I focused on enjoying myself. I was surprised by Oyarzábal, who did everything well, and Ceballos, who said: ‘We have to win this game.’ He went out and won it by himself.”