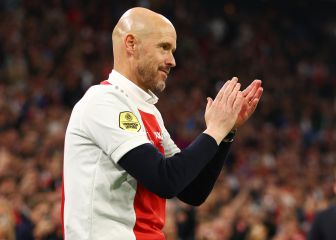 With last night’s league title clinching, Ajax’s season is for all practical purposes over. In this way, Erik ten Hag’s cycle as coach of the Amsterdam club also ends. On Sunday he will lead his last game before go to Manchester United. It will be the farewell to the best coach the club has had in this 21st century, the creator of a team that reached the Champions League semi-finals three years ago.

Erik ten Hag’s story at Ajax has been one of undisputed success, responding to what he had shown at Utrecht the previous two seasons (in his first year he was elected Eredivisie coach of the year). Marcel Keizer was unable to maintain the good level that the team had given with Peter Bosz the previous season, when they were finalists in the Europa League, and in December they turned to Ten Hag, who could not react in time to win the league. Since then, not a single championship has escaped him, winning the Eredivisie for Amsterdam in 2019 after a five-year drought.. Later, he has won the other three seasons, being only two at an effective level because, although he finished as leader, in 2020 the league was suspended due to the pandemic, the title was given by desert.

Four and a half seasons in which he has dominated the Netherlands and been able to build enough of a reputation in Europe for United to trust him with one of the biggest clubs on the planet. These are the keys to his success.

Continuing with the philosophy of the Amsterdam club, Erik ten Hag has taken advantage of the quarry ajacied to give to the youth team that are or have become indisputable. On your resume you can say that you made Sergiño Dest, Jurrien Timber, Brian Brobbey, Devyne Rensch, Noussair Mazraoui or Ryan Gravenberch debut.. Now it’s gone, but leaves young promises like Kenneth Taylor on the teamYouri Reeger or Van Axel Dongen, three footballers who have also made their debut and who are called to be regulars in the Ajax squad in the coming years.

Blind and Tadic arrived in Ten Hag’s first summer, two players who gave the team the competitive level necessary to make the historic 2018-19 season in Europe. Not all the signings made to replace casualties have worked and even so he has managed to get the team forward. For example, they tried to replace Frenkie de Jong with Razvan Marin and De Ligt with Schuurs, but neither gave the desired performance.

However, he has known how to take advantage of most of the players he has signed, such as Quincy Promes, Edson Álvarez, Lisandro Martínez, Berghuis, Haller or Antony, who can come out now for a much higher price than it cost in 2020. Brobbey’s loan this past January has been key in this title.

Erik ten Hag likes to have an eleven type and not change it. IF the coach’s onces have been planned for something, it is because they change a lot in the first months of the season, making different adjustments until they find their favorite team.

The league is the championship of regularity and Ten Hag has only failed in the season in which he arrived, when he took the team already five points behind PSV. In these four and a half Eredivisie seasons he has won 112 games out of 142. A stability that Old Trafford fans have only dreamed of since Ferguson left.

Another of the aspects for which Erik ten Hag stood out at this stage at Ajax is for achieving great results in the big games. The Klassiekers against Feyenoord have been mostly celebrated, having won eight of the nine they have played. The only one that did not win was a painful 6-2 in 2019. It is noteworthy that they made their official debut by beating them 2-0.

Against PSV it took him a little longer to start. The first two meetings between them lost them 3-0, but since then he has only lost in two of the eleven. If something can be attributed to him, it is his balance in finals, having a discreet 3-2 in favor. The two he has lost have been in this last season against PSV.