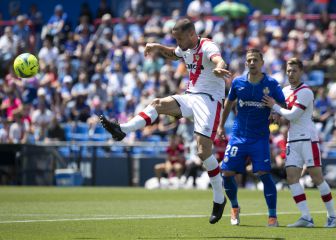 The draw does not fill the stomach of either of the two teams, but Rayo mathematically assures him to continue one more season in the First Division and Getafe leaves him one stop closer to his goal, since he leads Mallorca by five points, who also wins the goal average, with only three games to go.

Line-up in hand, Rayo seemed to have left the hotel relaxed, as Iraola changed half of the eleven team that the previous day had tied with Real. The ownership of Mario Suárez was surprising and that neither Falcao nor Guardiola, the team’s scorers (6 goals), were upstairs. As a pointed reference, he placed Nteka, a Congolese striker who five years ago was discovered by Fuenlabrada scouts when he played for Betis San Isidro, a Second Regional team from Madrid.

The need for Getafe to achieve a victory that would ensure permanence was written in the script. Perhaps that is why the first chance of the game was his, when in the 6th minute Dimitrievski spoiled an opportunity for Olivera. It was a charrúa move. Damián put the center from the right and Oliveira finished off from the left. Damián and Oliveira, the two full-backs with whom coach Diego Alonso (who was Atlético’s striker in promotion to First Division) has managed to qualify Uruguay for the World Cup.

El Rayo tried it through Comesaña with long shots. Getafe’s defense of five left no loopholes to approach the area.

Iraola changed his strategy and hit the key perfectly. In the 20th minute, Rayo asked for a penalty (it was) from Soria to Isi, but the play was invalidated due to the Rayista attacker being offside. The end of the first half brought scoring chances, first one by Isi in the 40th minute to a great pass by Balliu that left Isi alone against Soria. Almost immediately (44′), Baby had the clearest of the game. It is incomprehensible how one of the players with the best hitting and greatest punch in the entire League, like the Brazilian, hit the ball so horribly badly when I only had to push him half a meter from the goal line. Baby is more lethal 30 meters from the goal than one step from the goal line.

Baby himself confirmed it on the way back from the locker room, when in the 50th minute he crashed the ball into the crossbar by executing a foul six meters beyond the large area.

Clearly, by game and by occasions, Rayo deserved to win the match. The best of Rayo was being Trejo. The most prominent of the locals was their goalkeeper Soria, who would catch a header from Mario Suárez in the 62nd minute.

Falcao, as he did the previous day against Real, was about to score a goal with the first ball he touched, but Okay got in the way of the shot.

However, in those comings and goings that football has, Getafe had the victory in their pocket for a few seconds, which took the referee to annul Aleñá’s goal (83′) due to Ünal’s prior handball.

Iraola: “In some moments we have had a good time”

Mathematical permanence Can you already tell if you will continue in the Ray?

What has been discussed during these days. He was not a mathematician, but the chances of getting into trouble were very low. The relationship with the club is fluid and what we have to decide will be these days.

How do you rate the season?

Qualifying the season of oneself I do not like. Let us note the fans that we play for them. There have been many moments in which we have enjoyed. Beautiful matches with enthusiasm. We get paid to achieve goals. It’s been nice. The first part was very good which has allowed us not to run into trouble. There have been times when we’ve had a good time.

Does it make you angry not to have been able to fight for Europe?

We are talking about very big words. We have dominated games, including today’s, but we haven’t scored a goal. That hit gives you the points. The First Division is a very stratified category. Getting upstairs is very expensive. If we do a lap as good as the first one, you are not guaranteed to be there either. It’s very difficult to get into that fight.

Does Iraola want to continue with Rayo?

I understand that you ask me. We will have to decide these days. I don’t want to lose the perspective that we have three games left against teams that play a lot. You have to live up to them and continue competing.

Have they recovered their essence after the bad start of the year?

We have been a happy team with better numbers defensively. The points came with clean sheets. Upstairs it’s hard for us to hurt. When you’re thick you have to do defensive work.

How is Isis? Will Merkelanz play again?

Isi has felt something in his shoulder, there are two weeks left and I see it difficult for him to play more. I would love for Martín to play, but he is in the recovery phase and it will take more time.