If you are looking for a pretty medieval town full of charm, with a beautiful well-preserved castle in the Rennes region, you will find what you are looking for in Fougères. And when I speak of a castle, let’s get it right, it is “just” the largest medieval fortress in Europe. Just that !

Finally, I say that … I had never heard of Fougères before looking for sites to visit in Ille et Vilaine. So I wasn’t expecting much from this visit and yet it is one of the most beautiful cities that we visited during these holidays.

All this intro to tell you that yes, Fougères is one of those must-see sites to put on your list if you come to Brittany and as Combourg is not very far, we took the opportunity to go there too.

So that’s it, apart from the castle, what are we doing in Fougères?

There is plenty of parking in Fougères so we don’t have any questions, we park and take our best sneakers to explore the city on foot.

You will see it very quickly, what is curious in Fougères is that the castle is located in the lower town, while generally it is rather the opposite, where the castle overlooks the city. All this is explained because originally the upper town did not exist. And in the lower town the fortress is indeed built on a rocky outcrop, even if it is not obvious at first glance.

The castle is very well preserved, with a large wall surrounded by a moat. The panorama from the rampart walk must be worth its weight in peanuts but having arrived at the end of the afternoon, the visits were just ending. Instead, we walked around the outer enclosure which allowed us to pass in front of the beautiful Gothic Saint-Sulpice church and to enjoy several points of view of the castle sublimated by the soft light at the end of the day. . 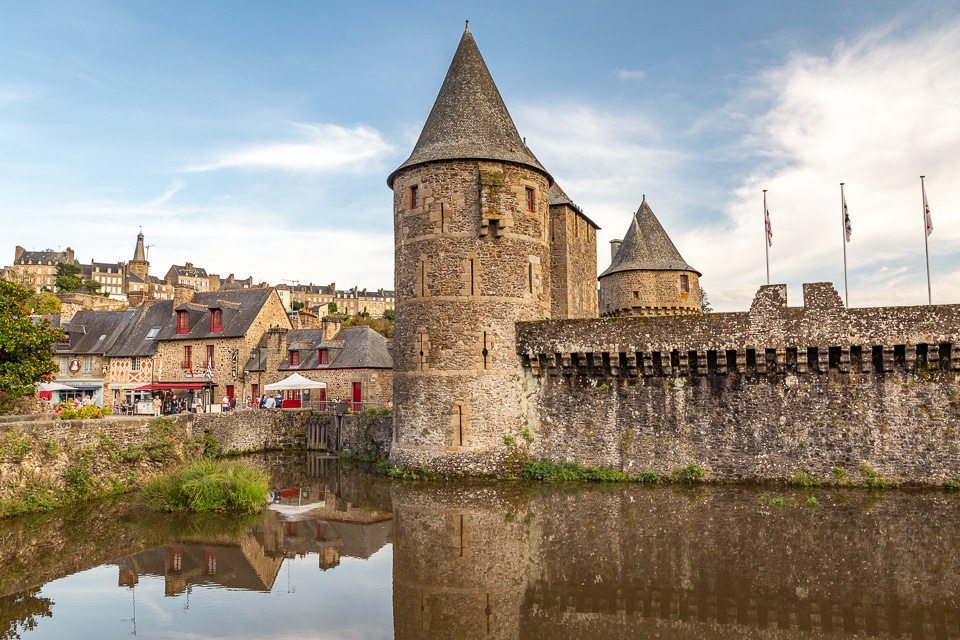 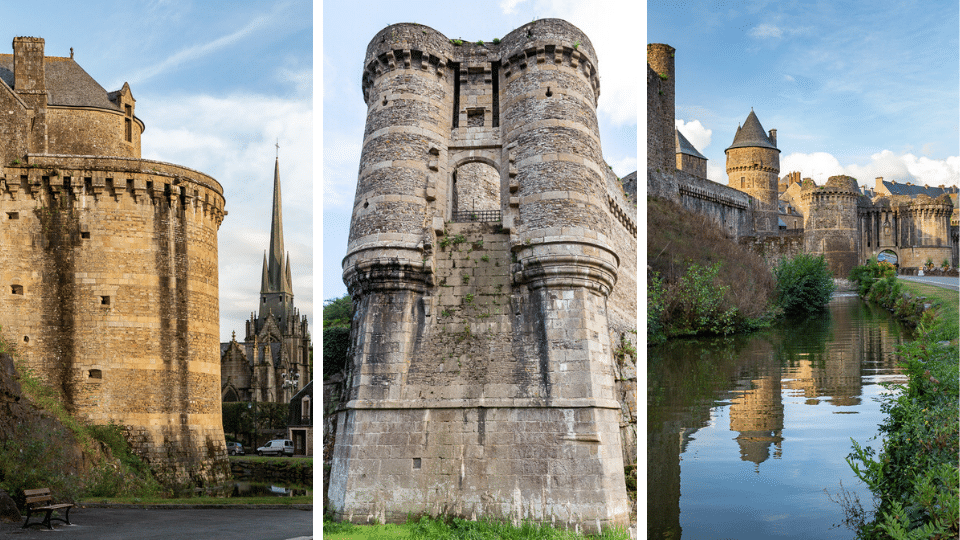 We continued our tour by exploring the old medieval village, the oldest district of the city with its half-timbered houses from the 17th century. At the time when the upper town did not exist, it is in this district that all the craftsmen were found, in particular the clothiers, the dyers and the tanners who made the reputation of the city for its shoe industry.

Small alleys in small staircases while passing by the charming half-timbered houses, we found ourselves taking a very small very sloping path which was to lead us to a belvedere, according to the sign. So yes, there must have been a belvedere one day, before the vegetation took over the place 🙂 Retracing our steps, I finally managed to find a breakthrough in the middle of the foliage to capture the lower town and the upper town, dominated by the Saint Léonard church. 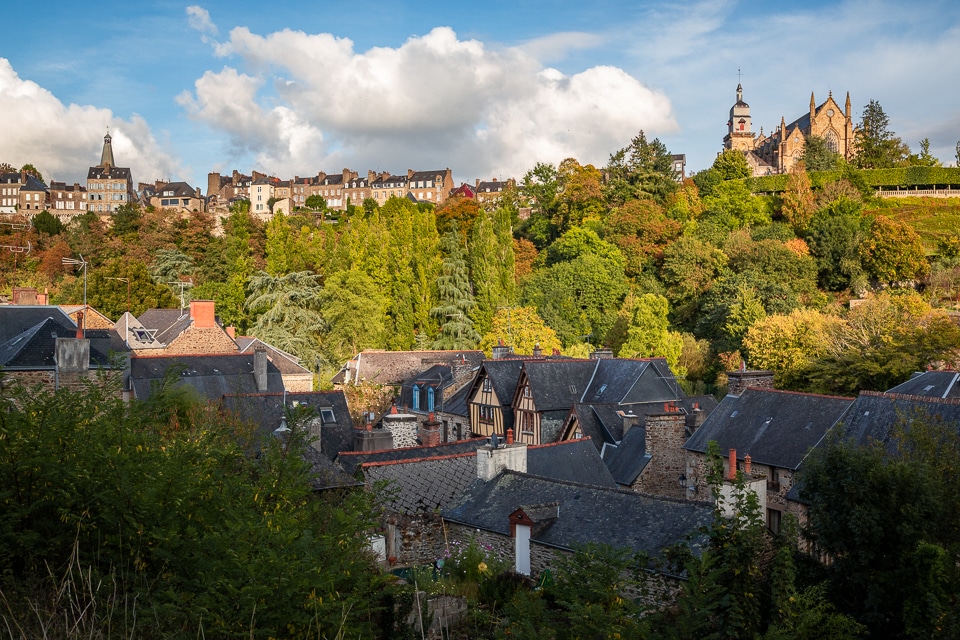 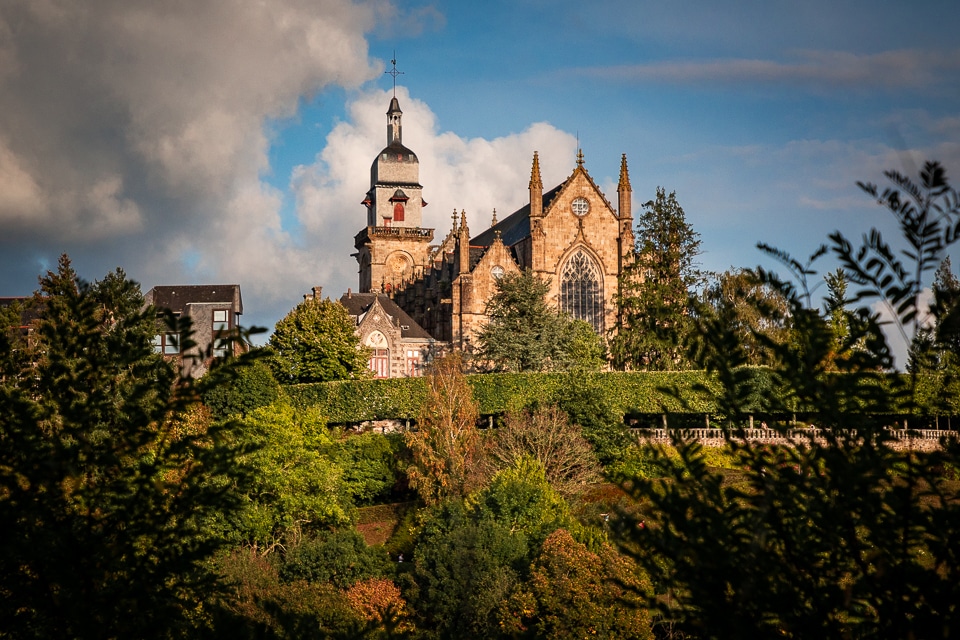 If you have absolutely no time to waste and you are looking for THE spot to take a picture of the castle, then this is clearly the belvedere in the public garden where you have to go. At least in the evening, in the morning I have not tested. Without having planned the timing, we were right there at the time of the last rays of sun, it was really splendid.

And then the public garden itself is worth a detour. Made in a series of terraces, it connects the lower town to the upper town thanks to a very pleasant and well-equipped path. At the end of September when we visited the park was really well flowered, with lots of nice photo opportunities around the kiosk and the mini waterfall. 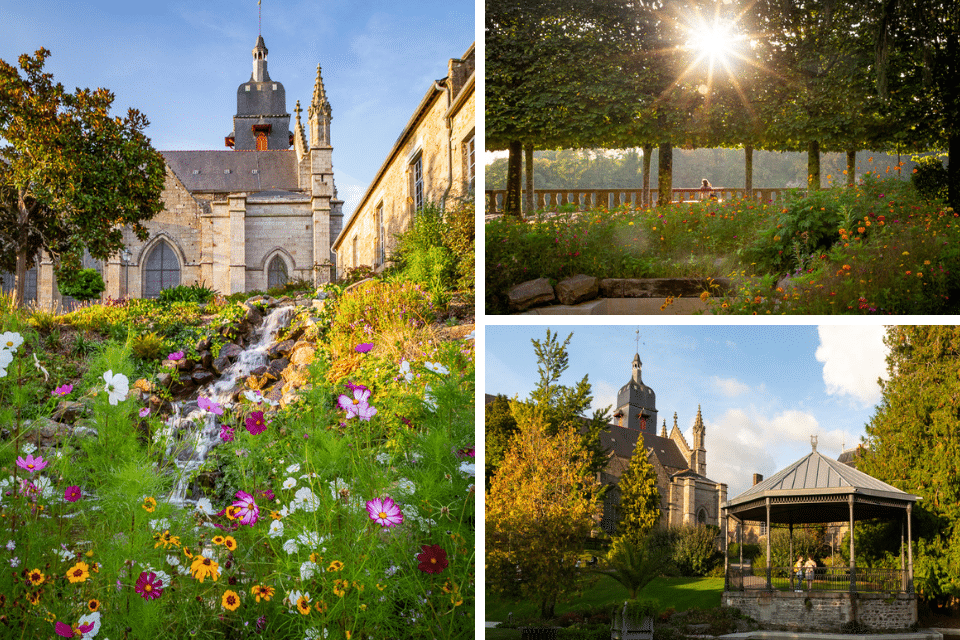 On leaving the public garden, we pass the beautiful Saint Léonard church. For 2 €, it is even possible to go up to the bell tower during the high season from where, I presume, the panorama must be incredible on the castle. Otherwise, inside the south chapel, you can see the oldest stained glass window in Brittany dating from the 12th century.

Continuing a little further, after having passed in front of the oldest half-timbered house in Fougères, which now houses the museum of the impressionist painter Emanuel de la Villéon, you cannot miss the large belfry which dominates the lower town. . It is the first in Brittany erected in 1397 by the bourgeoisie of the city and inspired by Flemish-type architecture, “imported” by the clothiers of Fougères following their travels in Flanders. 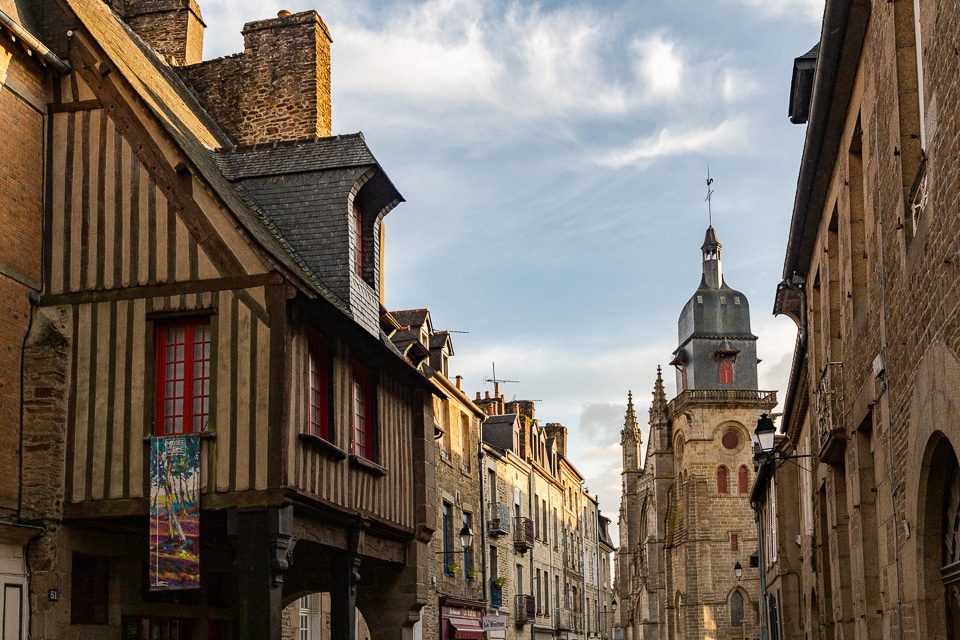 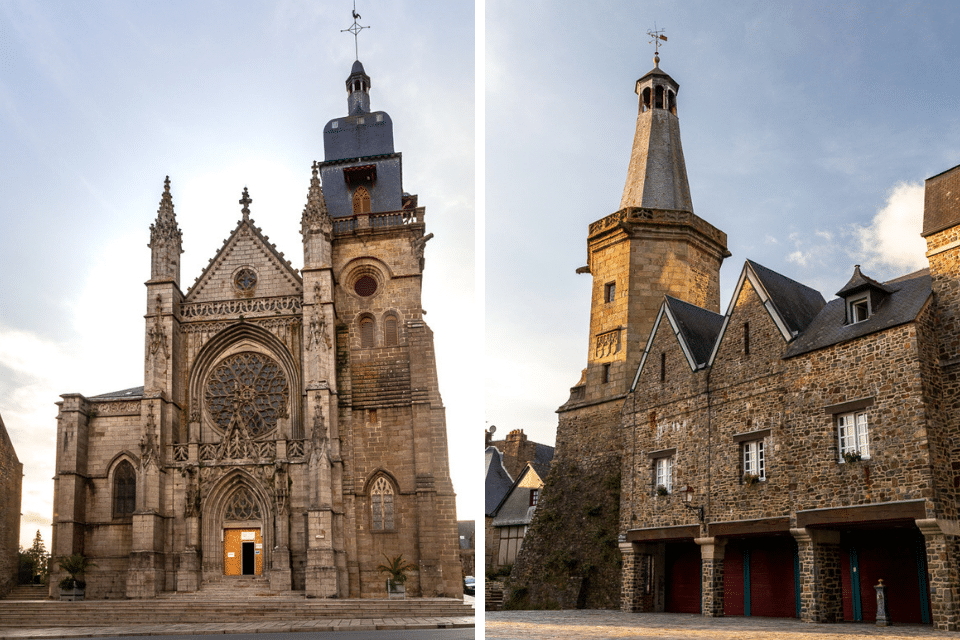 At the end of the main street, the Victor Hugo theater is one of the most recent buildings in the city. Built at the end of the 19th century, it had to close its doors in 1970 for questions of safety rules. Its identical renovation ended in 2001 with the charm of its old-fashioned decor. The theater can be visited during guided tours organized by the city or during heritage days.

Our tour of the city ended there, as our taste buds were irresistibly drawn to the aromas emanating from the many crêperies in the center. Impossible to resist the temptation! If you are looking for a good crêperie address, I recommend you The Gourmet Farfadet. Well-stocked pancakes and pancakes, with good products and at a perfectly correct price. We (and our greedy bellies) we validate 🙂

Combourg, from romanticism to fantastic legends

Located just 45 minutes drive from Fougères, and ideally positioned to reach Saint-Malo and the Emerald Coast, Combourg is a small medieval Breton village that deserves a stopover if you are passing through the region. 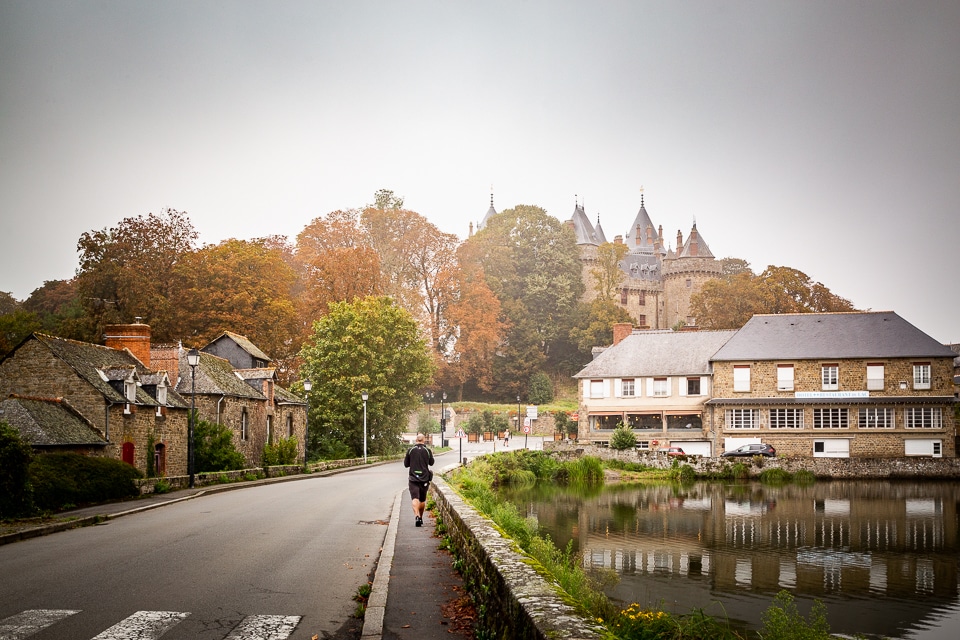 For the culture minute, Combourg is none other than the city which saw the growth of the writer Chateaubriand, illustrious romantic of the 18th century. The author of “Mémoire d’Outre Tombe” tells in his book his childhood in the castle of Combourg and the mysterious phenomena which took place there… As I do not want to spoil you, I let you read this novel and make you your own opinion 😉

See also  Why and how to start hiking?

As I love these mystical atmosphere and these places full of stories of all kinds, I would have liked to have visited the castle. But when we arrived early that morning, lack of pot it was not yet open. Not especially wanting to wait for the opening, we preferred to continue our tour of the city.

Drowned in a deep fog, the city gave off a special… intense atmosphere. I wouldn’t have liked to live here on my own, it was a bit scary. The tour of the center is done very quickly and our steps lead us directly to the large lake which borders the city.

The luminosity barely pierced the mist, and under the autumnal colors, the 11 towers of the castle could be seen overlooking the city. Despite the mist, the decor was very bucolic, with the lake, the water lilies, the reflections of the city and the castle in the background.

Noting that the mist did not seem in a hurry to rise, we did not linger and continued our stay in Brittany, discovering the Rance valley and Saint-Malo.