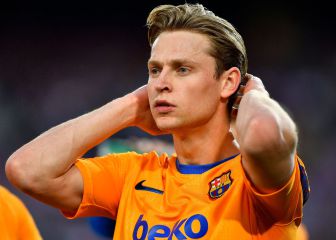 The spotlights will point strongly to Frenkie de Jong tonight. The Dutchman, 24 years old, has been in all the headlines of the week after knowing that Barça has put him, internally, the transferable poster and that he is willing to sell it if an offer close to 70 million euros arrives because, in addition, He has already confirmed his replacement, the Valencian player Carlos Soler.

The Times pointed out yesterday the interest of Manchester City, forced to reinforce its midfield, where it runs out of interiors. Fernandinho is finished and Gundogan ends his contract in 2023. However, Barça is aware that the two clubs that want De Jong are Manchester United and Bayern. De Jong has not had an easy week. In fact, he is upset by the storm of rumors surrounding him in recent months. Last week he was curt in front of the cameras (“I have confidence and the coach says he has confidence in me; everyone is happy”, he said without realizing any real feeling with Xavi) and at the end of the season he will sit down with the club. Proud, the midfielder will not continue if, as he now observes, the club and the coach do not believe in him. For now, today he has a challenge to vindicate his quality in Heliopolis.