The token inspired by the famous Netflix series soared above $ 2,500 before falling to zero. The project disappeared from the Internet and everything indicates that its members threw the carpet.

It seems that in the end it was a scam, now that SQUID has left the game.

SQUID, a cryptocurrency based on the popular series of Netflix “Squid Game“, Or”The Squid Game”In Spanish, it plummeted in price after the project’s official website disappeared.

According to data from Coinmarketcap, the token SQUID is down nearly 100% in the last 24 hours after hitting a high of $ 2,856 this morning. The cryptocurrency, which was launched on October 20, grew meteorically increasing more than 86,000% in a matter of a week. All in the midst of the historic success of the South Korean series on the platform of Netflix streaming.

However, on Monday, the token quickly erased all accumulated earnings after several signs of scam. The price drop below USD $ 1 comes after the project’s official website went offline. It also coincided with a Twitter alert, which flagged the token accounts of Squid Game as suspicious. 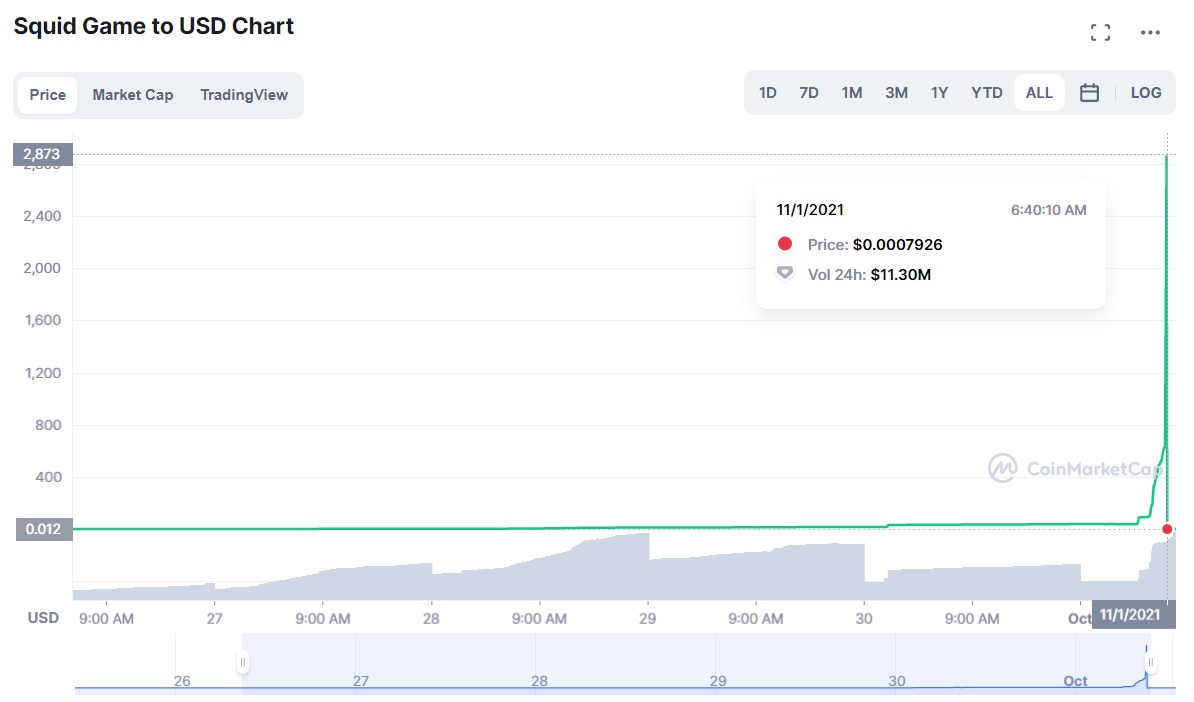 By the time of editing, SQUID is trading at $ 0.002807, with a trade volume of USD $ 14 million, according to data from Coinmarketcap.

The price crash occurred after Twitter will flag accounts allegedly associated with the SQUID token as suspicious, including the bill original with more than 70,000 followers. After this account was restricted, the token developers of Squid Game they tried to execute other accounts, which were also subsequently closed.

It also coincided with what appears to be the closure of the project’s official website. The official page, which was hosted on SquidGame.cash, disappeared as did the presence of the SQUID team on social media. ORAn archived version of the official web portal can be seen by visiting here.

The token price drop also emerged shortly after the team of developers of the cryptocurrency project left a curious message on their official Telegram channel suggesting that they have abandoned ship.

Someone is trying to hack our project these days. Not only the Twitter account @GoSquidGame but also our smart contract. We are trying to protect it but the cost is still abnormal. Squid Game Dev does not want to keep running the project as we are depressed by scammers and overwhelmed by stress. We have to remove all restrictions and transaction rules from Squid Game. Squid Game will enter a new stage of community autonomy.

Sorry again for any inconvenience that has been done to you. If any stranger starts coming out of it, ignore it. Thanks.

So far, everything seems to indicate that the cryptocurrency project of Squid Game he has executed what is commonly known as a “carpet pull.” A “Rug Pull » Carpet tugging is a malicious maneuver in the cryptocurrency industry where cryptocurrency developers abandon a project and run away with investor funds.

Building on the success of “The Squid Game”

As reported DailyBitcoin On Friday, several reports already warned that the project inspired by the popular South Korean series could be a scam. Among the red alerts, one of the first calls for attention was the inability of SQUID investors to sell or exchange their currencies.

Coinmarketcap, the leading cryptocurrency tracking website that listed the token last week, he had posted a warning about it. Also the technical document or white paper of the project mentioned an alleged “anti-dumping technology“Which would prevent SQUID holders from liquidating their coins unless they met certain conditions.

Other suspicious elements of the project that caught the attention of the community were the language of the technical document, written in bad spelling, the identities without a trace of the supposed team of developers mentioned on the website, and some deceptive alliances that the project claimed to have with reputed companies such as Netflix, OpenSea and Coingecko.

Analyzes of some scam tracking portals also indicated that the crypto project of Squid Game it was not trusted.

However, it appears that multiple warnings from community experts did not prevent the token’s staggering price rally. On Friday, the SQUID coin reached a maximum price of USD $ 15 to continue rising over the weekend and register a meteoric increase this Monday morning, managing to exceed USD $ 2,000 per token.

Meanwhile, others are also trying to capitalize on the worldwide fame of the Netflix series. According to data from Coinmarketcap, there are at least five other cryptocurrency projects inspired by “The Squid game“, One of the tokens even registers a price above a million dollars. This will certainly not be the end of the scams related to the popular South Korean show.