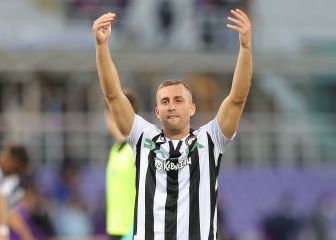 Gerard Deulofeu has returned to stay. With 12 goals and four assists in 32 games for Udinese, the Spaniard is having the best season of his career. According to Olocip’s data, in fact, he is the best player in Calcio, with a value of 14.63, ahead of Perisic (12.57) and Berardi (12.54) In his talk with AS, he acknowledges that getting to this point has taken him time and patience. His big smile reveals that he was worth it.

– How is Italy treating you?

– What does it mean to have achieved your goalscoring record in the first divisions?

– It tells me that I must value and not let go of what I am doing. I have suffered a lot in my career to get to this point. The best thing is to make sense of where I am and what is happening to me, enjoying every moment that football is giving me, after two very hard years.

– Is there a goal of these 12 that you carry in your heart?

– Although we lost, the one I scored at Maradona. I was the first 10 to score a goal in that stadium since it was called that. And it was also very good.

– It’s the best season of your career, isn’t it?

– Yes, and I know why it is. Before I have been very irregular, now I am at a point in my life where everything I do has a meaning. When things happen to me, I’ve already worked on them before, I see them coming. Family, mental predisposition, physical sacrifice, team: everything works and influences.

I am at a point in my life where everything I do makes sense.

– During his time at Milan he had also shown a high level.

– Yes, I think the performance was similar, but the understanding and organization of my work was not at the level it is now. Today I understand the game like never before and I know what the rest of the team asks of me. That’s why I have regularity.

– Working with Mr. Cioffi helped him…

– The coach helped me a lot in the motivational aspect: he makes us go out on the field like lions, he has a gift for that. He gives me a couple of indications for the defensive phase, but he gives me enormous freedom in attack, which is where I have to demonstrate. I move through all the zones looking for the imbalances of the opposing team.

– Its perfect organization in all the details helps a lot, its facilities are incredible and it is one of the few clubs that has a new stadium in Italy. He’s pitched dozens of champions over the years.

– According to Olocip’s data, he is currently the best player in Serie A. Was it expected to reach such a high level after the injuries?

– Yes, I trust myself a lot and I always hope to be a special player. It is a very nice fact, since it refers to the creation of the game and the contribution of value to the team. I like it, I’m crazy about statistics (laughs).

– How did you manage your serious knee injury?

– Mentality, environment, organization. You have to come back little by little. Last year was a transition year, I had to have surgery again and from then on everything got better. I learned a lot with it.

– Let’s talk about Serie A. On Sunday they were close to stopping Inter.

– The mistake was conceding two goals at the beginning. The reaction was good, but scoring two goals against Italy’s best defense is very difficult.

– How do you see the fight for the shield?

– I hope and wish that Milan wins, of course. I am your typhoid. They have a small advantage, but they can’t fail any more because I think Inter will win in the three remaining games.

– Is it true that Calcio is no longer as defensive as before?

– The catenaccio still remains in a situation: when a team has a result in favor. There, even Inter itself makes two terrible blocks in defense, and the spaces are very short. Removing that, the championship has totally changed. There is more coming and going, more space, and that was good for me.

– There is not the intensity of the Premier.

– The Premier has more, people ask for that, but I tell you one thing: tactically it is much more disorganized. There are huge imbalances, the defenses are much less organized than here.

– Italy will not go to the World Cup and its clubs continue to add poor international results. How do you explain it?

– Well, the World Cup was a disgrace, but not long ago Italy was crowned European champion, that cannot be underestimated. It is a growing football: in four, five years it will return to a higher level. Juve, Inter and Milan will take a step forward in Europe, and watch out for Napoli, Roma, Atalanta, Fiorentina… From inside, they give me good feelings.

– Is LaLiga still going on?

– Of course. Madrid this year was much superior, but it was because Barça is in transition. Barça fans must be patient, because an incredible future awaits them. They have young people with a level… I see them at 18, 20 years old and it seems crazy to me.

– Pedri and Gavi have impressed him.

– They are freaks. I have been there at that age and I know how difficult all that focus is, that balance that I did not have at the time. You have to give continuity and patience to Xavi’s work.

– Would you give them any advice?

– The only thing I can tell you is to keep it up. At that time, I did not have the focus, the mentality and the right environment to face that period that came to me when I was so young. They do, and it shows. Patience, sacrifice and continue enjoying and learning. With Xavi, Busquets, Piqué, Jordi Alba, you can learn a lot.

Pedri and Gavi are incredible, I know how difficult it is to be there and they have the balance that I did not have

– How did you see your friend De Paul at Atleti?

– He is a phenomenon, an incredible player. There he plays in a different position, a little further back. He is in a process of adaptation, I think they have not seen the real De Paul yet. But they will see it.

– Luis Enrique knows you well, do you think about the National Team?

– It is the maximum illusion and the maximum pride for a player, but I know that it is difficult. I must be focused on doing well with Udinese: if he has to come, he will come.

– His name has been linked to several great Calcio…

– At the moment they are only rumours. I recognize that I would like to take a leap, but everything has its process and I am very happy at Udinese. What I have clear is that I am 28 years old and the best of my career is yet to come.

He is the best Calcio player for Olocip

Gerard Deulofeu is finally showing everything that his talent promised. And Italy clearly suits him. In 2017, he spent six months at Milan, where he shone with four goals and very good performances. Later he returned to Barça, the club in which he grew up, and went to Watford, with whom he scored 17 goals in 70 games. In England, in 2020, he suffered a torn cruciate ligamenta serious injury that left him far from the green between March and October, and that also had consequences in the following year, his first at Udinese.

2020-21 was a transition season, which helped him regain his rhythm and return to the maximum of his potential. This year has undoubtedly been the best of his career. With Udinese he has added 12 goals and has never scored so many in a first division (with Watford, in 2019, he reached 10), although his contribution to the team goes beyond that. His four assists prove it and also the data of Olocip. According to Artificial Intelligence, he is the best player in Calcio, with a value of 14.63, ahead of Perisic (12.57) and Berardi (12.54).

The striker is without a doubt the technical leader of Cioffi’s team (he is the best for shots, goals, through balls, successful passes, penalties received, standing completion, game construction…)of which he wears number ten, and he has three games left to continue perfecting his statistics.

Then, it will be time to talk about the market. His name sounds for several clubs (Naples, Milan), something inevitable before this performance and his age. At 28 years old, her career can still give away many surprises.