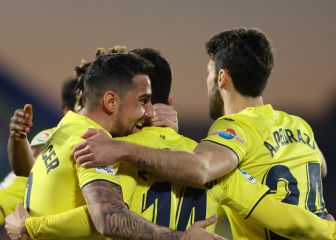 When you have something important to say, it is best to do it right away. and for Villarreal a quarter of an hour was enough to make things very clear to Getafe: not because two days ago they did the club’s greatest feat by eliminating Bayern in their Munich bunker, we come here now on vacation.

The fact is that the first blow of the task was given by Getafe. Within five minutes, one deli of Ünal when giving a high-heel assist left Aleñá alone against Rulli, but his shot went directly against the goalkeeper’s body. Tic, tac, the goal was sensed.

A much less aesthetic but much more effective assistance reversed the sensations, and the possible 1-0 went to the real 0-1. Alcácer, in semi-miss, approached the ball at the feet of Gerard who, hitting first, beat Soria low.

It was minute 7. At 15′ it was 0-2. Gerard stole the ball in the center, drove to the area and gave it to Trigueros when he entered alone from the left. It was no coincidence that Villarreal’s two goals came through the area usually covered by captain Djené, out due to suspension and whose position was occupied by Cabaco, as unusual in the line-ups as he is bland when he appears in them. That Emery is a phenomenal strategist is known from Munich to Getafe.

See also  In suspense with Alaba and Casemiro

Tick ​​tock, the alarm sounded in the Coliseum in the ear of Getafe. The previous defeats of Mallorca and Rayo widened the margin of error, but relegation is still just around the corner as soon as the steps are wrong.

Arambarri tried it from outside the area (20′), but most of the approaches and shots on goal continued to come from a Villarreal who was very comfortable with the wind in their favour. It is not yet known how Chukwueze failed, only against Soria, 0-3 at 43′. But there is even less of an explanation for Alcácer’s failure: totally alone at the far post, with Soria outmatched, the goal barely a meter away, it was not even necessary to push the ball, just put your foot…. And still he threw it out of goal. Gerard’s play, 10 even though he has 7.

Gerard Moreno must have felt like Santa Claus on December 25, spreading happiness to everyone around him. He scored 0-1, made it 0-2 and put it on a plate for Chukwueze twice, and for Alcácer two more.

In the second part, Quique went to look for the enemy at his house. He raised lines and increased the pressure, winning the prize in minute 63 with a goal by Ünal, the player who has scored more than half of Getafe’s goals in the league (15/29). Remarkable individual play by Olivera.

See also  Villarreal, in the eyes of Liverpool

The game ended in the visiting area due to inertia and logic. Getafe needed to score and Villarreal’s boots were heavy after the battle in Munich. Someone who only saw the second part would not understand the result. Those who watched the first half can’t explain how they only went into the break only 0-2.