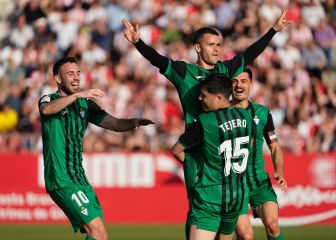 This dead man is very much alive. The Eibar got up from First to the sound of a Aketxe, who was in charge of charging the defibrillator that resurrected a gunsmith team that struck first in the semifinal of the playoff against a simpleton Girona. The rojiblancos, moreover, did not know how to take advantage of the red to Tejero in the addition of the first half. Aketxe’s goal, in minute 28, was enough to give Garitano’s block half a ticket to the final. Ipurua will decide, but Girona, now, in order not to be eliminated, will have to win by two goals difference in Ipurua.

The atmosphere that reigned in Montilivi was one of a big game and it didn’t take long for Eibar to show why they are the big favorites in this tie. Garitano opted to give Aketxe the title and the midfielder offered a recital. His quality in passing and hitting the ball are First Class and, in the 6th minute, he placed a cross into the heart of the area that Venancio was about to take advantage of. His header slipped into Juan Carlos’s goal, but Arnau Martínez avoided the goal. The gunsmith team was comfortable on the pitch, with fluid football, and submitted to a Girona that did not worry Cantero throughout the first half. The occasions, all from Eibar, followed one another and almost every arrival was dangerous. In minute 21, Edu Expósito ran into the crossbar and, in minute 28, the delight of Aketxe’s 0-1 came. His goal, to see it repeated over and over again, because he had it all: distance, hitting, effect and precision. The ball went through Juan Carlos’s squad. Merits did more than Eibar to go ahead on the scoreboard and it is that in the first 45 minutes it was much superior to a Girona from which only Baena was saved in attack.

See also  Vinicius: "I'm close to my renewal; I want to be here as much as Marcelo, Karim..."

But of course, Garitano did not count on the excess of protagonism of weaver, who in just one minute, in the added period, saw two yellow cards in a row. The first for a foul as hard as it was unnecessary on Baena in the center of the field and in the following action, for slapping him.

Eibar was forced to play the entire second half with one less and of course, to defend. A completely different game from the first half, Míchel changed to a four-man defense, brought on Pablo Moreno and Iván Martín and Montilivi pushed the rojiblanco block. The gunsmiths then hung from the pole and tried to close ranks. Girona missed more overflow down the wings and only Stuani, in 62′, was close to equalizing, but his header went off the crossbar. After that, absolute darkness and not a single clear scoring chance for the people from Girona. It is true that Stuani claimed a penalty in the 85th minute due to an elbow from Venancio, but the referee and the VAR did not consider it. The tie now goes to Ipurua and Eibar is even more favourite.