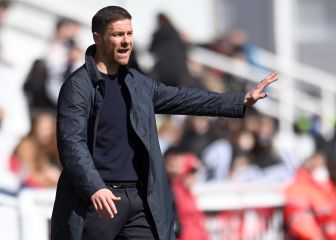 Montilivi opens its curtain with a duel of gazes towards the sky. Both Girona and Real Sociedad B want to look up the table to achieve their respective goals and they can only win. While the rojiblancos, who have just lost in Zaragoza, must win to continue dreaming of direct promotion (if they win they will be only six points behind Almería, second), the subsidiary must hurry up their loader because a stumble would place them too close to the abyss of the First RFEF. Waiting for his result this Monday, he is ten points away from permanence (follow the match live on As.com).

Girona has the casualties of Pablo Moreno, who is ill, and the injured Sarmiento, Terrats and Kebe, but they have the unbeatable news of the return of Borja García. After two games of suspension, he is available for Míchel and aims to start because he is the ideal footballer so that the ball does not burn and put criteria to the actions that require vertigo. The coach trusts him and he will be the one to engage the spinal cord made up of Pol Lozano, Aleix García and Baena, with a Stuani thirsty for goals. The Uruguayan has gone three games without scoring and the race for top scorer is not waiting for him. With 17 points he is behind Stoichkov and Borja Bastón. The people from Girona have a great opportunity this Monday to establish themselves in the playoff (if they win they will put seven points away from the seventh-placed team) and how important it would be to be only six points away from direct promotion. That yes, despite the fact that he receives a subsidiary that seems to be in low hours (chains five games without winning, with three losses and two draws), Míchel knows that they are going to fight for possession and success in the areas will be crucial.

And it is that Real Sociedad B plays without a net. He has to win to stay hooked on the fight for salvation. Away from home is where he is obtaining the best results and that is what Xabi Alonso’s team is holding on to. The realistic coach does not have Djouahra or Ander Martín, with the first team, but he has recovered two fundamental pieces in recent days, such as goalkeeper Zubiaurre and right back Alex Sola, both sanctioned on the last day. As he has been doing in recent outings, the Tolosa coach can repeat with a defense of five, with long-distance full-backs, such as Sola himself and the young Jonathan Gómez, although in the last game Cristo Romero came off the bench playing at a very good level and it is not ruled out that you have your chance to start. Arambarri, between injuries and other circumstances, can return to the axis of defense, while in attack Roberto López can occupy the upper plot with Robert Navarro and Karrikaburu. The subsidiary only serves the victory to keep alive their aspirations, increasingly scarce, to stay in Second.