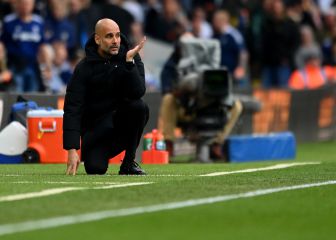 The coach of Manchester Citythe Spanish Pep Guardiolarecalled that the conquest of the Premier depends on what his team does after beat Leeds at Elland Road, a stadium with an atmosphere that did not want to compare to that of the Wanda Metropolitano “or I will have problems”.

The technician was questioned by the great atmosphere that is lived in the stands of the enclosure of the leeds and its possible comparison with the Atletico Madridwhom he visited a few weeks ago in the Champions League.

“I don’t want to compare them or I’ll have problems”said. “Since I arrived I have heard a lot about Elland Road. Last year the game was behind closed doors. Now I understood again why it is so special to play here”added the Manchester City coach who will return to Madrid on Wednesday to face Real Madrid in the semifinals of the Champions League.

The Manchester City took another step towards the Premier title. “He is in our hands,” Guardiola said. “Wolverhampton, Newcastle, West Ham and Aston Villa. If we win them all, we will be champions. If we lose points, Liverpool will be champions”he indicated.

“We know what we have to do. Win our games,” said the Spanish coach. “It is a privilege and an honor to try to win what would be our fourth Premier League in five years”.

“We started very well. We didn’t expect them to come out with five behind, but we surprised them. After the goal, we suffered a lot. We conceded transitions,” he warned. Guardiola. “After Aké’s second goal we created a lot of chances. It’s a good result to go into the Champions League game.”

GuardiolaHowever, he acknowledged that “the result seems more comfortable than what actually happened.” “We try to set aside the tie against Real Madrid and focus on the Premier“.