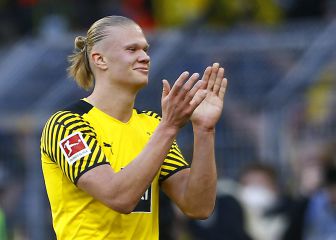 Erling Haaland will move many millions next summer market. So many that some of his suitors have withdrawn from the bid considering that the figure was exorbitant between signing bonus, commissions or payment to Borussia Dortmund. Others, on the other hand, are willing to make an effort, but they have some doubts such as the plague of injuries that the Norwegian has suffered throughout this season and that it could be a prelude to the rest of his sports career. Is it worth reaching 200 million to face your hiring? It is a debate that is in the air. While, The ace up the sleeve that the striker has is being excluded: the World Cup in Qatar.

Norway has not qualified for the World Cup. In other words, while all the world’s stars wear out thousands of kilometers from home and face one of the strangest years in calendar history, the ‘9’ will be gaining strength for the second leg of the competition. Just as Italian soccer players, Serie A clubs or Liverpool can benefit from Luis Díaz or Mohamed Salah; Haaland saves a huge privilege for next season.

If he leaves Dortmund, as planned except for an unexpected turn of events, He will have August, September, October and part of November to debut with his new club. Then the World Cup in Qatar will begin, from November 21 to December 18. For four weeks, The Norwegian will catch his breath and physically recover from the load of matches. It is not a trivial subject. This season he accumulates four injuries. The first, due to muscle issues, kept him out for a couple of weeks. She came back and a few days later she fell again. She forced and that took its toll.

See also  Thanks to VAR and Carrasco

In February, he fell again after, again, playing everything with his team. Too much burden on the physique of a player who, despite his status, continues to adapt to professional football. So much so that Haaland himself, just as Gareth Bale has done at Real Madrid, He has asked Dortmund not to publish his medical reports, according to Sport1. The background of the matter is that he does not want the media pressure to target him and it could affect his professional future. He does not want to be singled out as a crystal footballer, although there is evidence that this season he has suffered more physical setbacks than expected.

In fact, Marco Rose, coach of Dortmund, confirmed at a press conference that he is still not recovered from his latest injury: “He is not yet pain free. We can’t push him to do something he doesn’t want for himself. It is impossible not to suffer pain. They sent me a photo in which you could see that her foot was twisted 90 degrees, something had to break “. An unequivocal sign that Haaland forces more than necessary to continue growing and to ensure a great professional future.

LaLiga intends to start the season on August 12, in the absence of confirmation from the RFEF. It will go continuously until November 13, seven days before the start of the World Cup in Qatar. The selectors will not have any time to prepare the appointment. The precise moments to travel to the country, get to know the facilities and carry out a previous session. Almost worse is the matter for the footballers themselves, who will assume a week of matches, travel, adaptation and more matches, in which there will be no margin for error.

At the conclusion of the World Cup in Qatar on December 18, players will return to their respective leagues with no time to breathe. And it is that, in the Spanish championship, Christmas Eve and Christmas will be respected, but on the 29th of the same month the ball will roll. Without preseason, with a few days of vacation and hardly any time to rest. Some will not suffer as much, since the majority of their squad will watch the World Cup on television. All the greats, on the contrary, will see an extra effort in the legs of their stars despite having more than half of the season ahead.

The Premier, another possible destination for Haaland, will start on August 6, a week before LaLiga Santander. It will stop the same day and keep Boxing Day. In short, a worse solution, since the players will arrive in Qatar with one more week of competition and will have less time to breathe on their return. Something that will not happen to the Norwegian, who will stay in his new destination, learning the details that remain to be polished with his new coach, working with the physios to start from scratch in December and with zero risk of injury or emotional ups and downs along the way. length of the month.

There is also the possibility that he will go to Bayern, as Bild has slipped in recent hours. As in the Premier, it will begin on the weekend of August 6 and will not stop until November 13, days before the start of the World Cup in Qatar. In this case, the ace is less ace, since the winter break is maintained until January 20, 2023. Even so, Haaland will have time to adjust and then rest to live almost two seasons in one. Afterwards, he would have to extend the campaign until May 27, the closing date of the German competition.

At this stage, it is no secret that the norwegian has lived through an anomalous season and has been too close to the infirmary. He himself admitted it in an interview: “If I have to improve something, it’s not getting injured. Because if I don’t get injured, I’ll play more games and progress much more. And if you ask me what goals I have for 2022, even for the rest of my career, it is not to be injured.“. A stone in his path that has led certain clubs to doubt his worth. Or, rather, his ability to prove himself.

And it is that Haaland will not be Mbappé. Dortmund will not hinder his departure and will let him go for an affordable amount or for the famous exit clause. But that figure will not be far from 100 million, which is already a striking number. In salary, yes they can walk on par. Parallel, Raiola wants commission and his father, too. While in England several media outlets claim that there is a personal agreement between the player and Manchester City, there are other reports that place Real Madrid at the head or at the same level as Guardiola’s team. If there were doubts, it should be remembered that the 2022/23 Norwegian has an ace up his sleeve: the World Cup guarantees him restfreshness in the final months, not taking so many risks, more adaptability…

Vote in the AS poll: how much would you pay for Erling Haaland?