As we have already told you on occasion, theft of catalysts in cars it fluctuates for reasons such as crisis or the rise in precious metals.

Although many people are unaware of it, the catalyst is a little treasure located in the bottom of our car. This piece can reach very high values ​​on the black market by containing certain expensive and hard to get metals; specifically, platinum, palladium and rhodium.

What is a catalyst and what is it for?

Many of you will know that it is a part incorporated in current vehicles but perhaps you are not sure what is it for. Well, its function is perhaps one of the most important in environmental matters, since it aims to reduce polluting elements contained in the exhaust gases of a vehicle using the technique of catalysis. This process makes it possible to increase the speed of a chemical reaction thanks to the participation of a substance known as a catalyst, thereby converting the 98% of highly polluting gases formed in the combustion process, such as carbon monoxide or nitrogen oxide, in others less harmful like water or carbon dioxide. Due to the need for this device to reach temperatures between 400 and 700 degrees centigrade for optimum performance, the catalyst is positioned at exhaust pipe, near the engine, where the gases still maintain a high temperature. Thus, all the heat energy passes to the catalyst and it raises its own temperature, allowing the gas transformation. 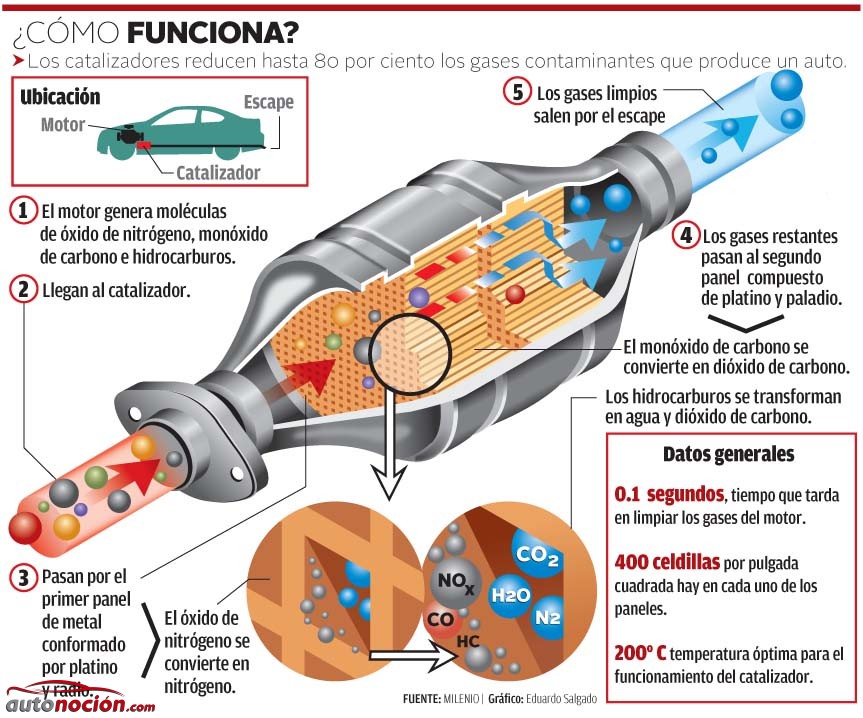 The catalysts began their journey in 1975, when American car manufacturers began to introduce them into their models in response to the United States Clean Air Plan required by the Environmental Protection Agency (EPA). The goal was reduce by 75% the pollution emitted by combustion vehicles after 1975, with which the catalyst quickly became an abundant part in all types of means of transport, from private vehicles to buses or trains.

Outwardly, it is nothing more than a stainless steel cylinder, but inside it has very interesting materials. First of all, and because of the high temperatures it reaches, the catalyst is coated with a metal heat shield that prevents heat from damaging our vehicle. It houses a ceramic matrix cylindrical or oval that adopts honeycomb shape -Around 70 cells per square centimeter- and is impregnated with a resin in which we find some noble metallic elements, such as Palladium (Pd), Platinum (Pt) and Rhodium (Rh). Its function is to initiate and accelerate the chemical reactions between the various substances that reach the catalyst, with which they come into contact. But it is important to clarify that the noble metals themselves they do not participate in these reactions and, while the first two allow the oxidation function, the Rodio intervenes in the reduction of harmful gases.

The polluting exhaust gases that are generated in the engine, once they come into contact with the active surface of the catalyst, are partially transformed into non-polluting elements. 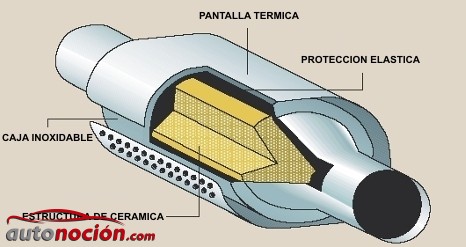 These precious materials are what they have aroused the interest of the ‘thieves’, to the point that the theft of these devices has increased more than double in the last three years. The rise in the price of Palladium and Platinum in the market has led to the fact that, in the United Kingdom, according to sources from the BBC, at least 25,000 thieves have been brought to justice for this reason between 2010 and 2014. But it is not a case reserved for other countries, in Spain, the theft of catalysts is also a fairly widespread practice. After numerous complaints by individuals and businessmen in the province of Valencia in 2012, the latest notable news It dates from May of last year, when the National Police in Leganés dismantled a gang specialized in removing catalysts, arresting three of its members who always operated at dawn in the Zarzaquemada neighborhood.

Theft of catalysts: Why are they in the spotlight?

According to sources from the National Police, this piece can reach a price around 300-400 euros on the black market, depending on its size.

It should be emphasized that today, the price of Platinum was around 32.50 euros per gram, while Palladium exceeded 63.20 euros per gram. If we consider that each catalyst can find between one and two grams of platinum, the benefit per device is around 110 euros, to which we must add the price of the rest of the noble metals and the scrap itself. In addition, the uses that can be given to its components they are very diverse, although the most common practice is to export them to melt them and thus obtain derivatives such as jewelry and textile accessories. Really, not an easy piece to get, since it is located in the underside of cars, with industrial vehicles, vans and SUVs being the most affected as it requires less effort from thieves.

How do they steal the catalyst?

On some models, especially older ones, it’s as easy as kicking the exhaust. In most cases, it requires a bit more work, requiring some specific tools for it. The most used are jacks, saws and even chains, which are tied to the tube to start it ‘from the rennet’ with the help of another vehicle. It will all depend on how quickly the thieves act, how discreetly they can afford to act, and what scandal they want to mount. Fortunately, the last technique is the least widespread, since it requires a somewhat more secluded environment to avoid being heard by the neighbors and the damage it causes to the underside of the vehicle they are considerable.

Can the absence of catalyst affect me?

Regarding the engine, its operation and performance will not be affected due to the absence of the catalyst, but it is a part that, when stolen, drivers must mandatory replacement to pass the ITV. For example, the price of a new catalyst for a truck can range, with labor, between 2,000 and 5,000 euros. Therefore, many affected by the wave of robberies They go to the scrapyards to replace them, although they have not been spared the assaults by the bands that traffic in precious metals. Most often own insurance of the vehicle cover around the 80% of the total price of the piece, but the fine print will have to be read carefully, since insurance companies like Mapfre do not cover the theft of the catalyst if it is the only element stolen.

Once their useful life is exhausted, what do you do with them?

Due to its precious metal content “catalyst recycling has become an essential part of the recycling process for an end-of-life car”, Says Álvaro Rodríguez, spokesperson for Spanish Federation for Recovery and Recycling (FER). “The number of vehicles with this component that are decommissioned is increasing, and therefore the logistics of recovering precious metals is very important”. Once their useful life has expired, the catalysts are treated as a potential source of noble metals, undergoing complex hydrometallurgical procedures that use highly aggressive and corrosive agents, in addition to producing large amounts of solid and liquid waste. Although they perform an important function in our vehicles to reduce pollution, finally what eaten for what is served.

Which cars are the most affected in the theft of catalysts?

Although all cars are susceptible to being robbed, the truth is that vehicles with greater ground clearance are the most affected. Commercial vehicles – such as trucks due to their large catalysts – or vans are the worst hit, although in recent months, SUV cut models and especially hybrids have experienced strong growth. While in SUVs the increase is due to the existing distance to the ground -which improves the comfort of thieves-, hybrids are due to the fact that the performance of the combustion engine is lower due to electrification and less use of the combustion engine allows the catalyst to have a much lower use.