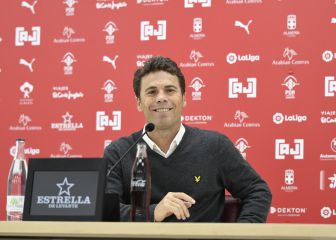 The Almeria chained four consecutive wins and seven days without losing, a streak that has boosted him to the leadership and has brought him closer to a promotion that is almost touch. His coach was proud in the Anoeta press room both for that defensive solidity and for the 65 goals scored that make the team from Almería the highest scorer in the championship.

Assessment: “It was a complicated game, much more than what the scoreboard showed. The first half was even and we were lucky, maybe not lucky, to get ahead. In the second half we were very safe, we scored the second and held on. It’s a deserved win. We finished very solidly behind in the last sprint.”

Four meetings without conceding: “I defend both clean sheets and scoring two goals. Everything is key. If you score two goals, it’s difficult to lose. We are a team in which we can all score, both the starters and those who come in after.”

Happiness: “I feel very happy because I know that there are many happy people in Almería, in the club, the players, the workers such as doctors, physios, kit men, the press… They are all doing a great job. We are missing that little step, but I am convinced that we are not going to let him get away.”

Possible promotion this Saturday: “Obviously I’m going to see them both. I’ll see them calm, because I know we depend on ourselves. If they puncture, we’ll go out to celebrate; if not, we’ll wait for Alcorcón day.”