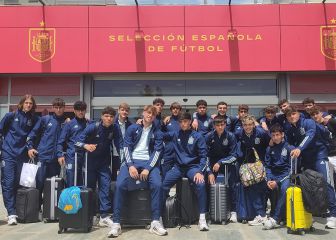 Two and a half years ago, the U-17 led by David Gordo traveled to Brazil to play the World Cup in the category. Ansu Fati preferred not to go with the National Team to establish himself at Barça and Pedri, then standing out in Las Palmas, was the leader of Spain in that tournament. La Rojita fell in the quarterfinals against France, but that championship, in addition to the Canary Islands, revealed us to some very young Yeremi Pino and Ilaix Moriba, among others, today established players. Titles matter less when you’re building champions for the future.

After the elimination, the 2002 generation ended its cycle as U-17s and it was the turn of those born in 2003. No one imagined that that tournament in Brazil was the last U-17 championship to be held until after two and a half years . Two lost generations that the pandemic prevented from being discovered ahead of time. Players like Pablo Torre (Racing), Fabio Blanco (Barcelona), Nico Serrano (Athletic) or Javi Serrano (Atlético) were unable to enjoy the showcase that tournaments of this size representin which illusion reigns, the desire to demonstrate and talent in equal parts.

But the pandemic has subsided and the national team football of lower categories can finally enjoy the celebration of a final phase, specifically that of the U-17 European Championship, which starts today in Israel, a land of crusades, where 16 teams aspire to proclaim themselves as the best on the continent. A battle in which the Spain of Julen Guerrero aspires to recover the throne that he achieved in 2017 with that golden generation in which names such as Ferran Torres, Abel Ruiz and Eric Garcia, among others, stood out.

The road will not be easy, of course. La Rojita will start tomorrow in the tournament against Turkey (7:00 p.m.), and then face Belgium (May 20) and Serbia (May 23), the rivals in group C of the first phase. The Belgians already put Spain in a tight spot in the elite round, where the U-17s won by a solitary goal from Miguel Carvalho (1-0) in a match in which they qualified for the European finals.

From that elite round, Spain came out undefeated and a large part of the block that makes up the current Julen Guerrero U-17 National Team was formed. A team where talent abounds, from goal to forward. “We are going very strong in all lines”, the coach confesses to AS just before leaving for Israel. And it is that many of the players who will defend the shirt of Spain already participate in the dynamics of their first teams despite being of youth age. This is the case, for example, of Iker Bravo, striker for Bayer Leverkusen who has even made his debut this season in the Bundesliga. The goalkeeper Ferran Quetglas has also been summoned to First Division matches, who despite being only 16 years old has been on the Mallorca bench three times this year. Real Madrid, attentive to his remarkable potential, has acquired his services so that next season he will defend the Juvenil A goal, where most of his teammates will have one or two more years.

See also  Sentence to Santi Mina: will he go to jail? can he be fired?

But if there is an area where talent and quality abound, it is the midfield, where Dani Pérez, from Betis, and Miguel Carvalho, from Espanyol, form a partnership that, if maintained over time, will bring much joy to the Spanish fans. The Spanish player, born in Brazil, is a jewel that teams like Barcelona have thrown at him and that the RFEF did not hesitate to tie to defend the colors of the National Team before those of the canarinha. He was the best player of the U-17 in the elite round, in which they also stood out Joel Roca (Girona), a winger with ease in scoring, central defender Yarek Gasiorowski (Valencia), midfielder Gerard Hernández (Barcelona) and forward Alvaro Ginés (Real Madrid)among others.

The European Under-17 will be played in five different venues, all of them in cities very close to Tel Aviv. Spain, which will be concentrated in Herzliya, will play their group matches in Ness Ziona (against Turkey and Belgium) and Rishon Zion (against Serbia). If the National Team goes to the quarterfinals, either as first or second classified, it will play its next match on May 26 in Ness Ziona (if it goes first) or Nentaya (if it is second), the city in which it will be played. the entire tournament starting with the semifinals, which will be held on the 29th. The final will be played on June 1.

The ball will roll again in the final phase of a European Under-17 three years after it did it for the last time. Italy and Germany will kick off this tournament in a match that will be played at Ness Ziona (4:30 p.m.). The Italian team, led by ex-Valencianista Bernardo Corradi, will test one of the favourites, the mannschaft by Paul Wanner, one of the stars of the tournament. France-Poland will open group B.