2021 is over, it’s time to take stock! In a very specific context, with the resumption of activities and COVID-19, this year has seen further changes in our use of digital tools. Discover the various figures and statistics that characterize the year 2021 on our websites, social networks, online commerce and the Internet more generally.

Figures related to websites around the world in 2021

The number of existing websites in 2021

This year, records were broken in terms of the number of sites uploaded. This year we reached 1.88 billion available sites. This figure has continued to evolve logically since 2018. Although 75% of them are inactive, the number of sites is still growing. 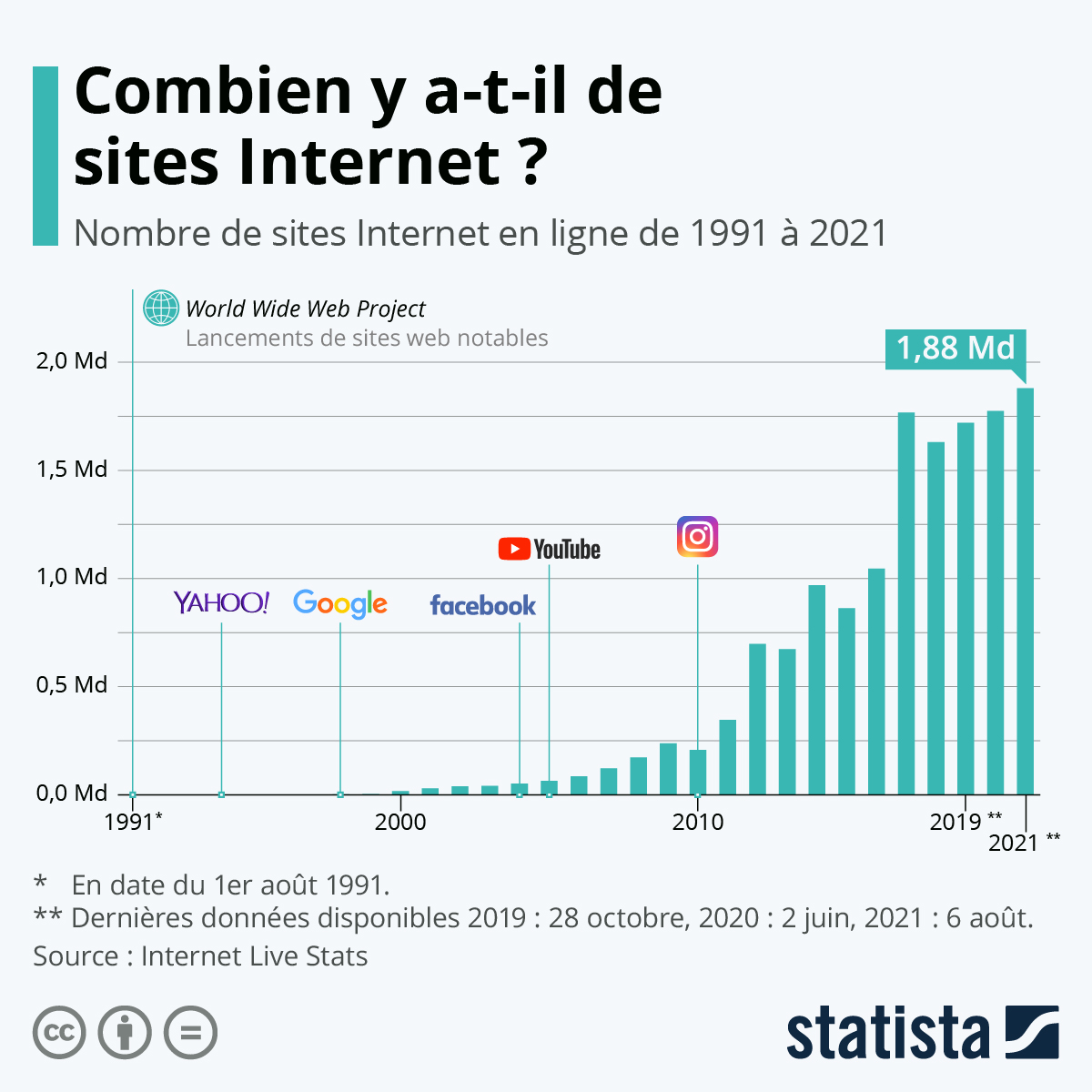 The most visited sites in 2021

The most visited site at the end of the year is… Google! There was no real suspense knowing that he has almost 3 times more monthly visitors than his dolphin (which belongs to him), YouTube. Then there are the main social networks, Facebook, Twitter, Instagram and their Chinese counterpart Baidu. 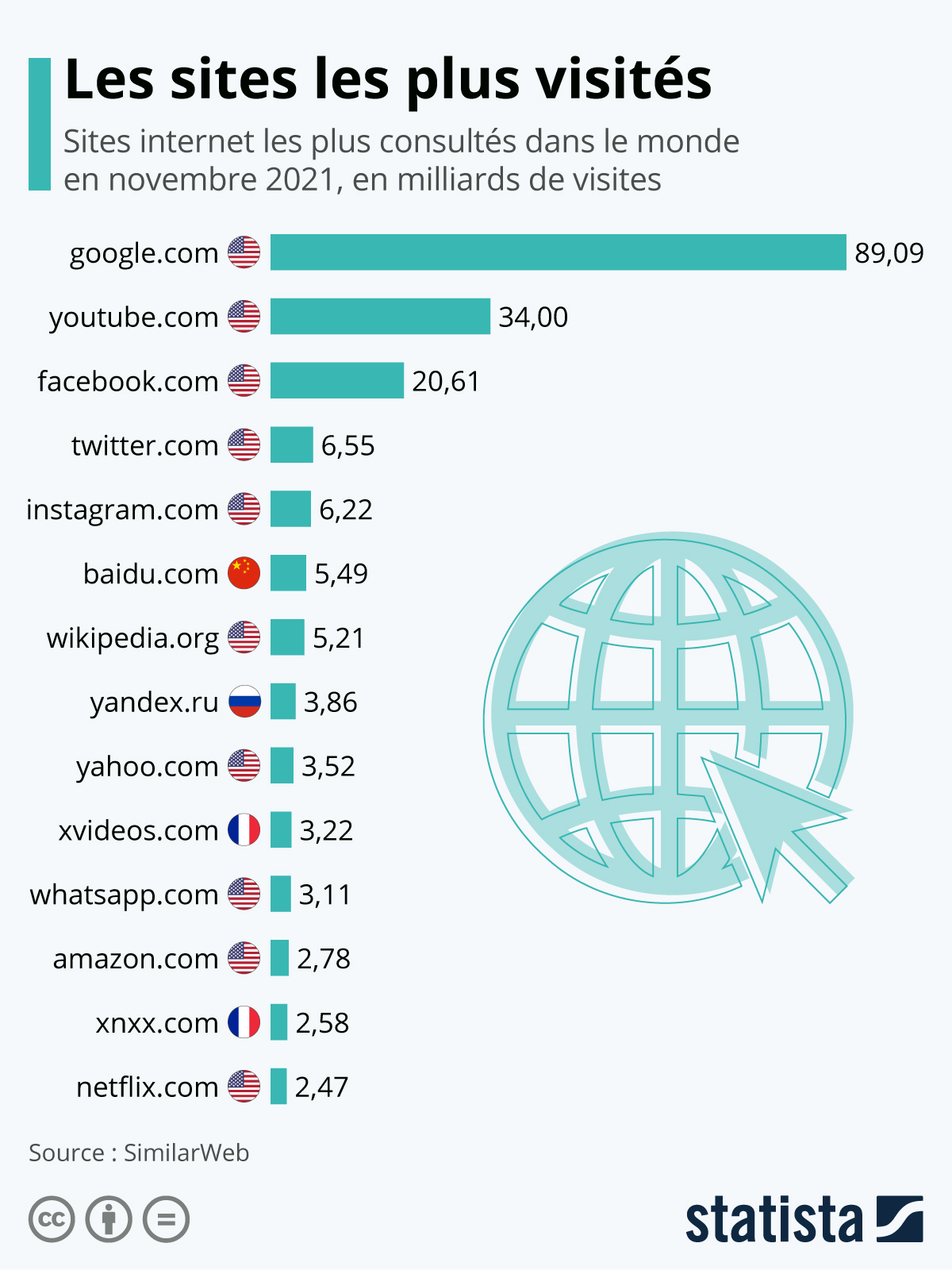 Figures related to the Internet and digital in 2021

What is the number of internet users in the world in 2021?

By far the biggest consumers of web content are Americans. They consume an average of 181 Gb per month per user. This is huge when we know that in Europe, we are at 80 Gb per person every month. Despite everything, in Europe, we remain large consumers since all the other continents are between 32 and 41 Gb monthly. 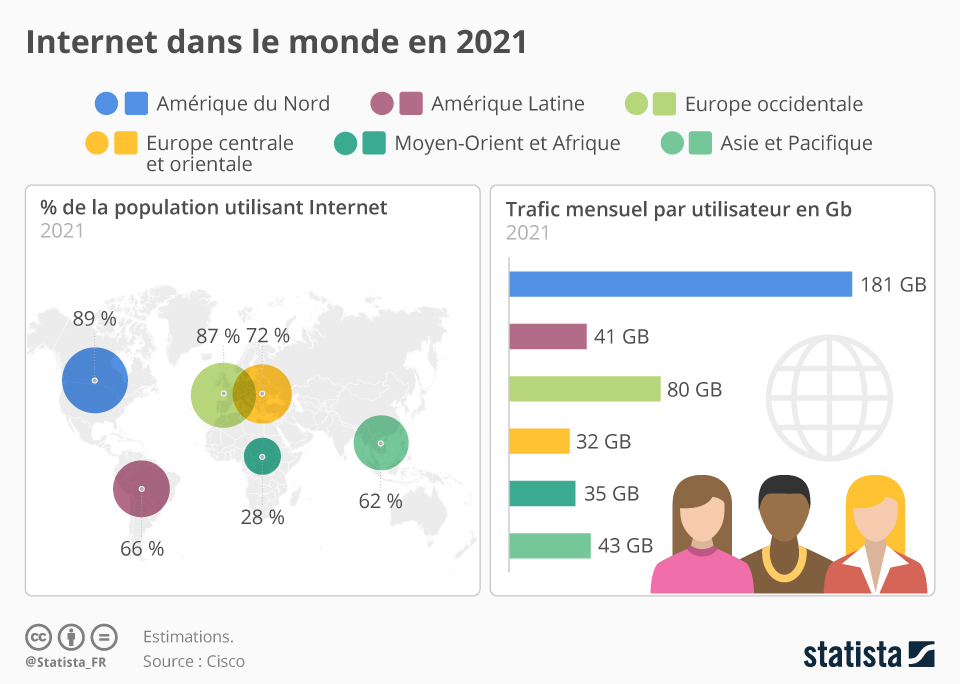 Of course, it is difficult to become an Internet user and browse the web if one does not have access to the Internet. This problem has been steadily decreasing for over 15 years. This year we reached 4.9 billion people who have access to the Internet. In 2019, we were only 4.1 Billion for example, and if we go back even more, there was only 1 Billion in 2005. Since 2018, the switch has taken place and we finally have more people connected than people without access.

However, a lot of work remains to be done, especially in developing countries, where nearly 96% of the unconnected are found. This confirms our finding on the lower number of users in Africa, the Middle East or Asia. 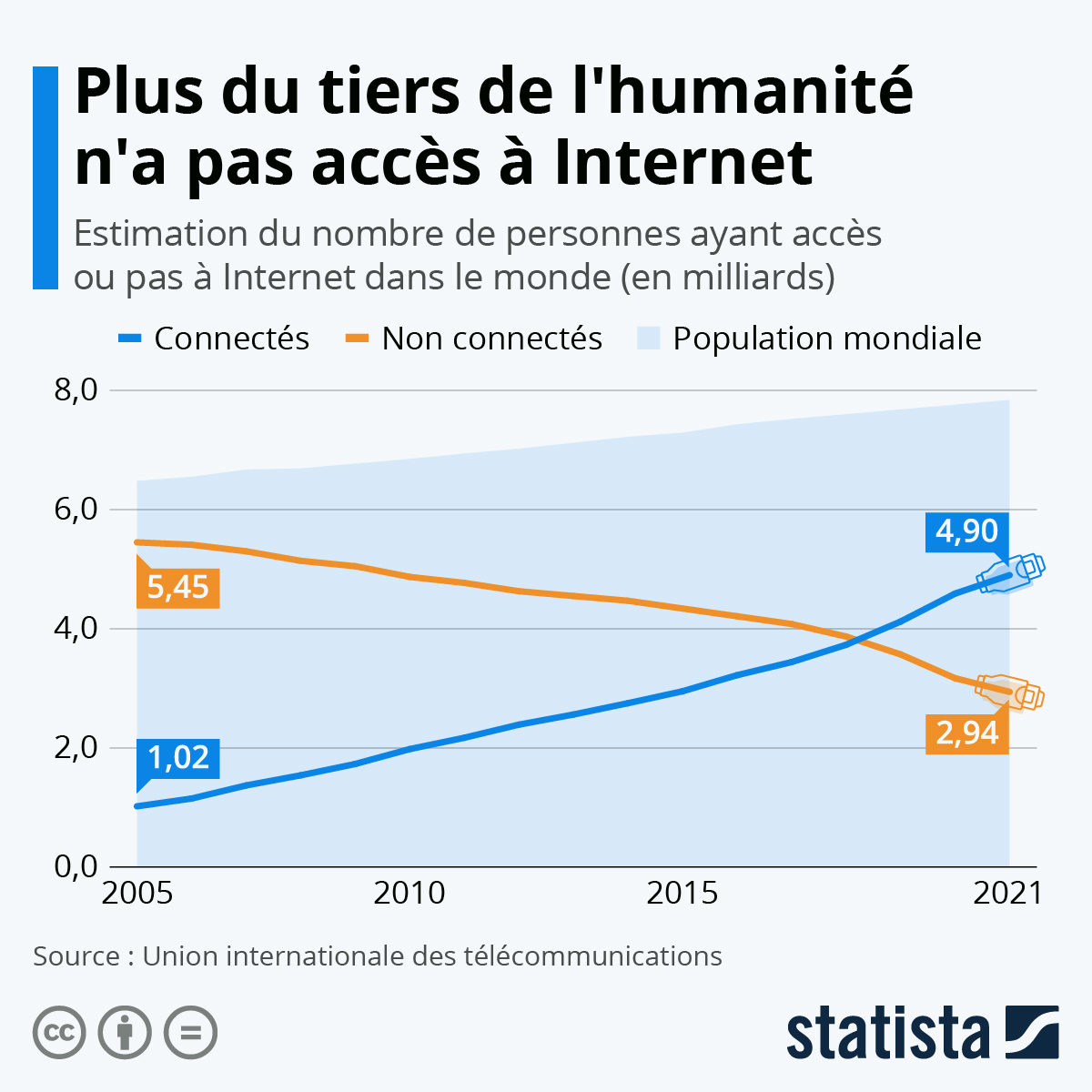 The price of the Internet in 2021: does it limit access?

If you find the Internet expensive in France, you shouldn’t! If there is somewhere where we can consider ourselves “lucky”, it is the mobile and Internet subscriptions accessible. Compared to the average French net salary, you have to work around 1 hour to pay for 1 month of high-speed Internet. It is twice less than Belgium, almost 3 times less than Spain, and 30% less than in the USA. The world champion is Israel with only 19 minutes of work needed for 1 month subscription. The Nordic countries, Japan and China are also excellent in this area and inferior to France. 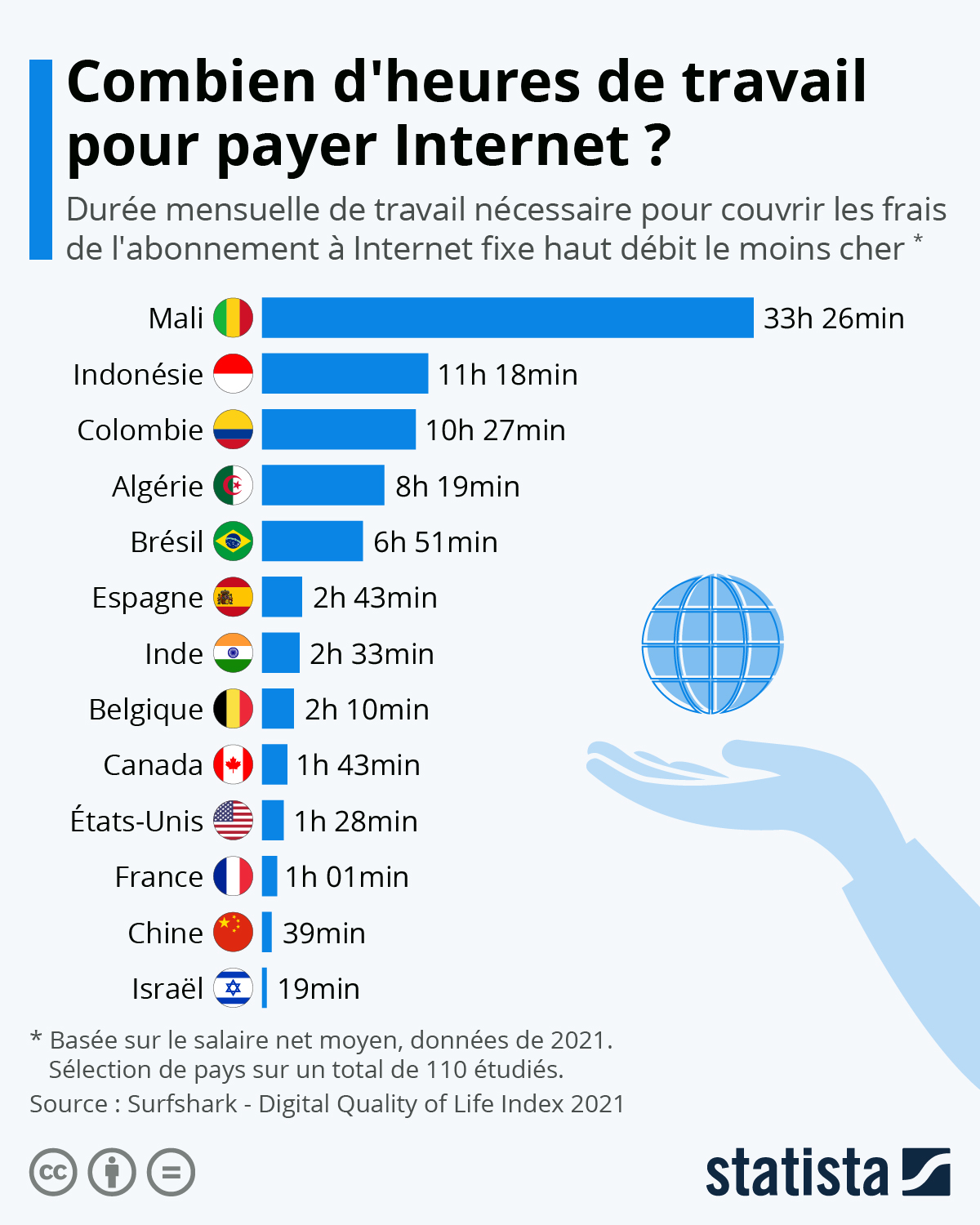 What are the most used web browsers?

Once again, no big surprise, the giant Chrome is in the lead for 2021. However, it has lost 0.2% of the market, going from 65.5 in 2020 to 65.3%. The real surprise is the evolution of Microsoft Edge, which triples its number of users in 1 year. This can be explained by the fact that it is set by default on Windows computers. Either way, it bumps past Firefox, which is losing nearly a quarter of those users this year. 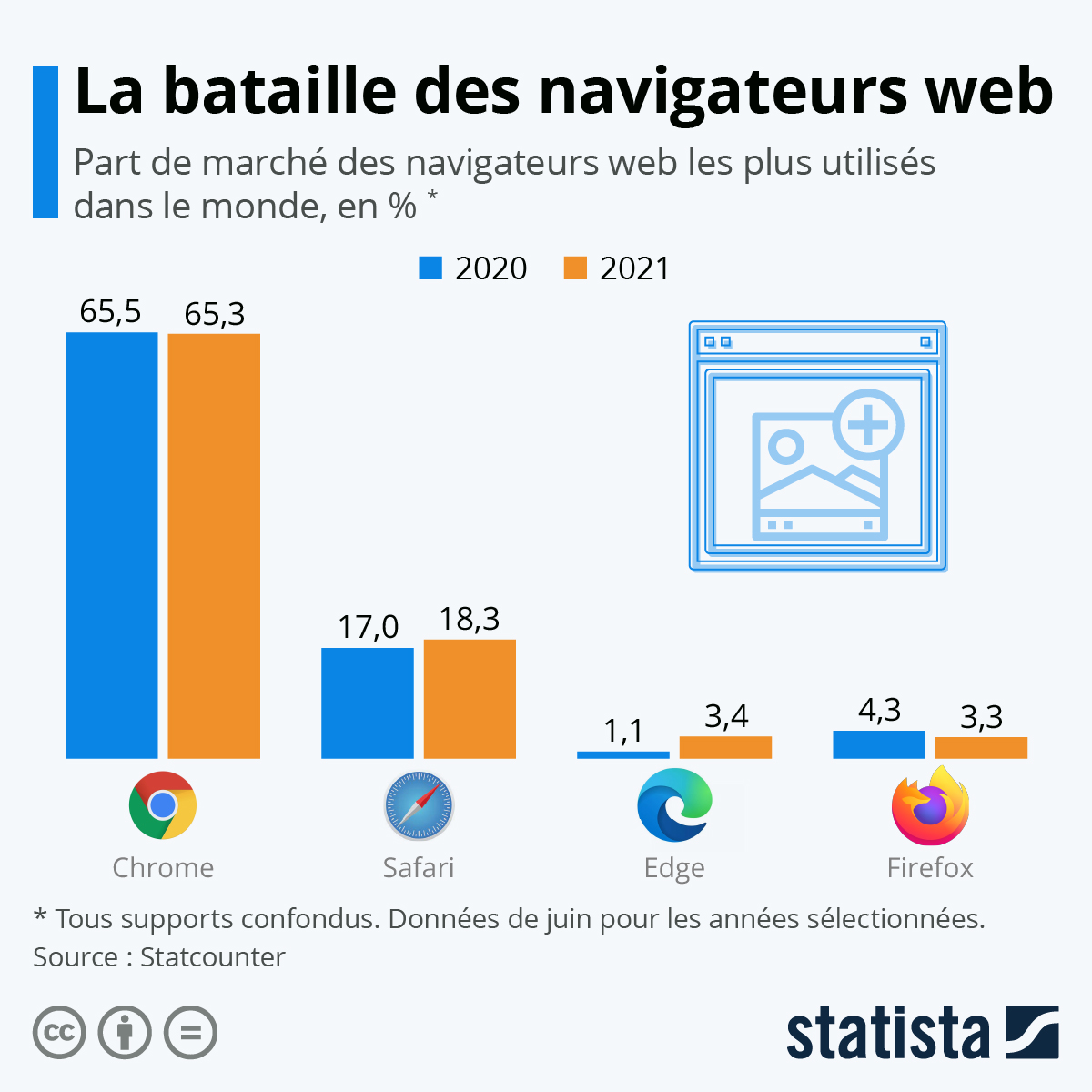 Where is data protection in France?

Data protection is an increasingly important debate in recent years. Indeed, we talk a lot about the GDPR and things to put in place to protect users, but we should perhaps first and foremost inform them. In any case, that is what the numbers are trying to tell us. 7 out of 10 French people are concerned about the data collected, while only 29% of the population feel that they have a good perception of the subject. Difficult to form one’s opinion without being informed. This will surely be one of the challenges of data protection in 2022.

We also note that the confidence of the French in the security of data varies according to the field of activity of the one who collects it. 7 out of 10 people trust banks, compared with only 3 in GAFAM. 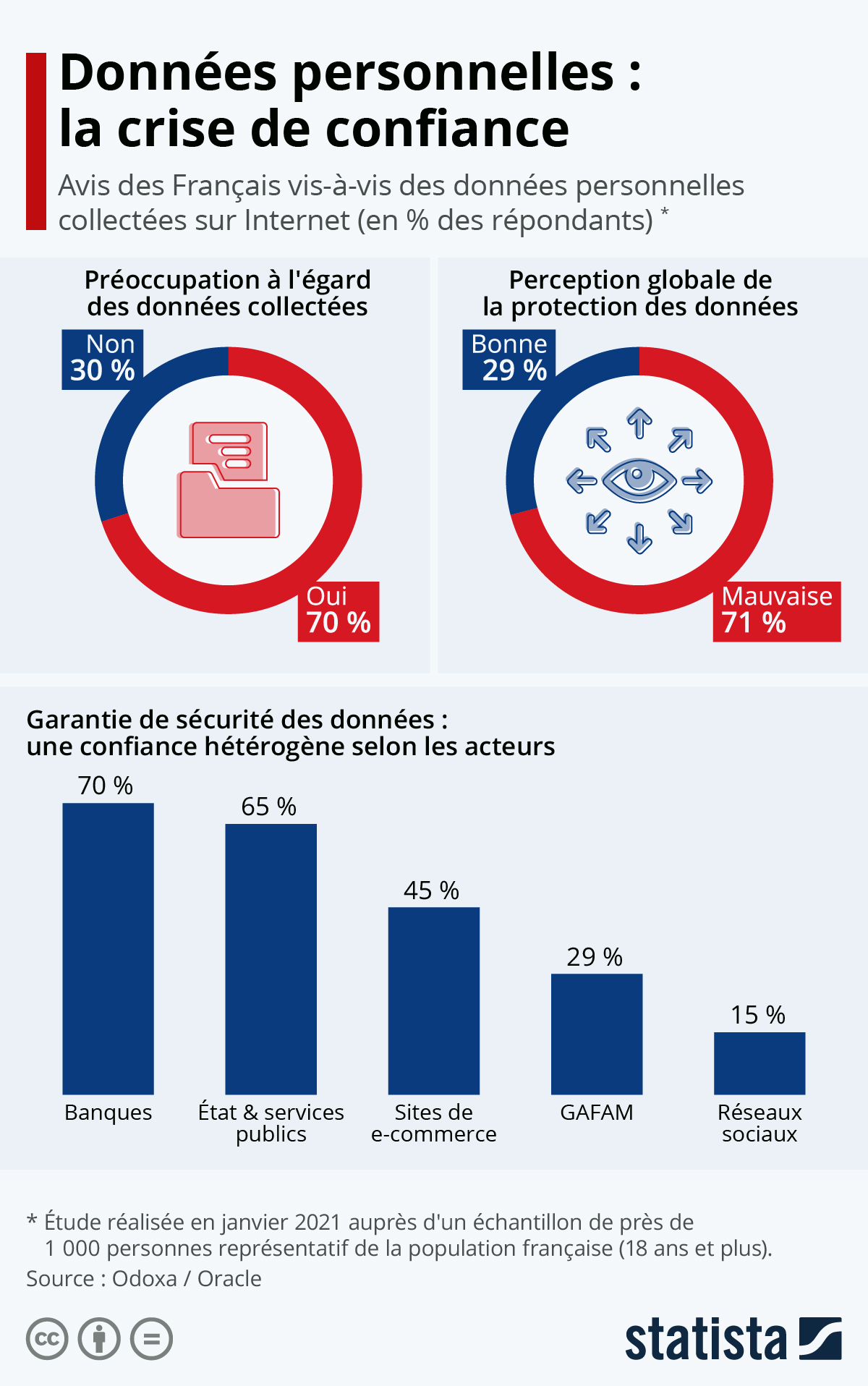 In fact, mistrust of GAFAM is confirmed and understandable, given that Facebook (and therefore Instagram) shares almost 80% of the data collected with third parties. 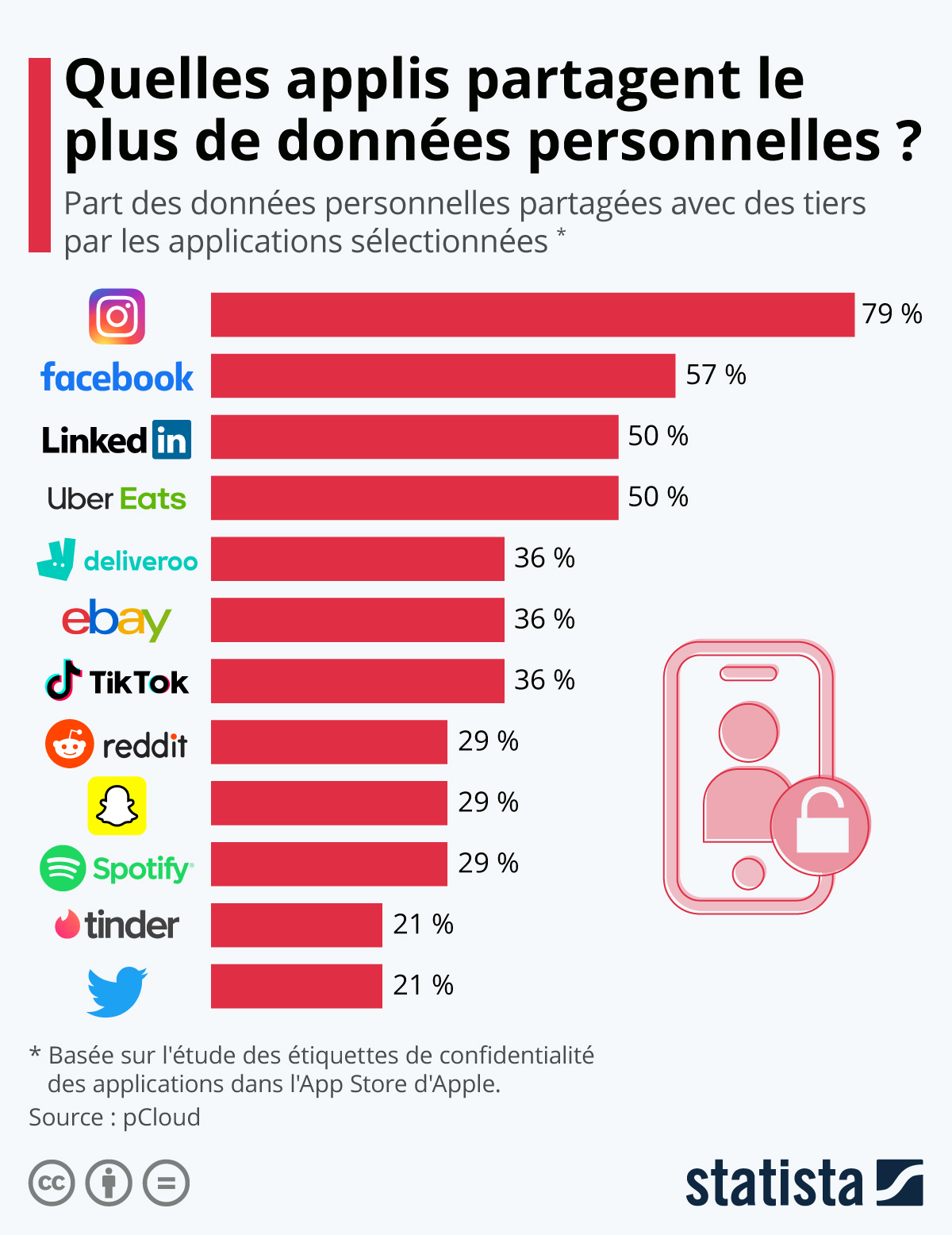 What are the most visited mobile applications in 2021? 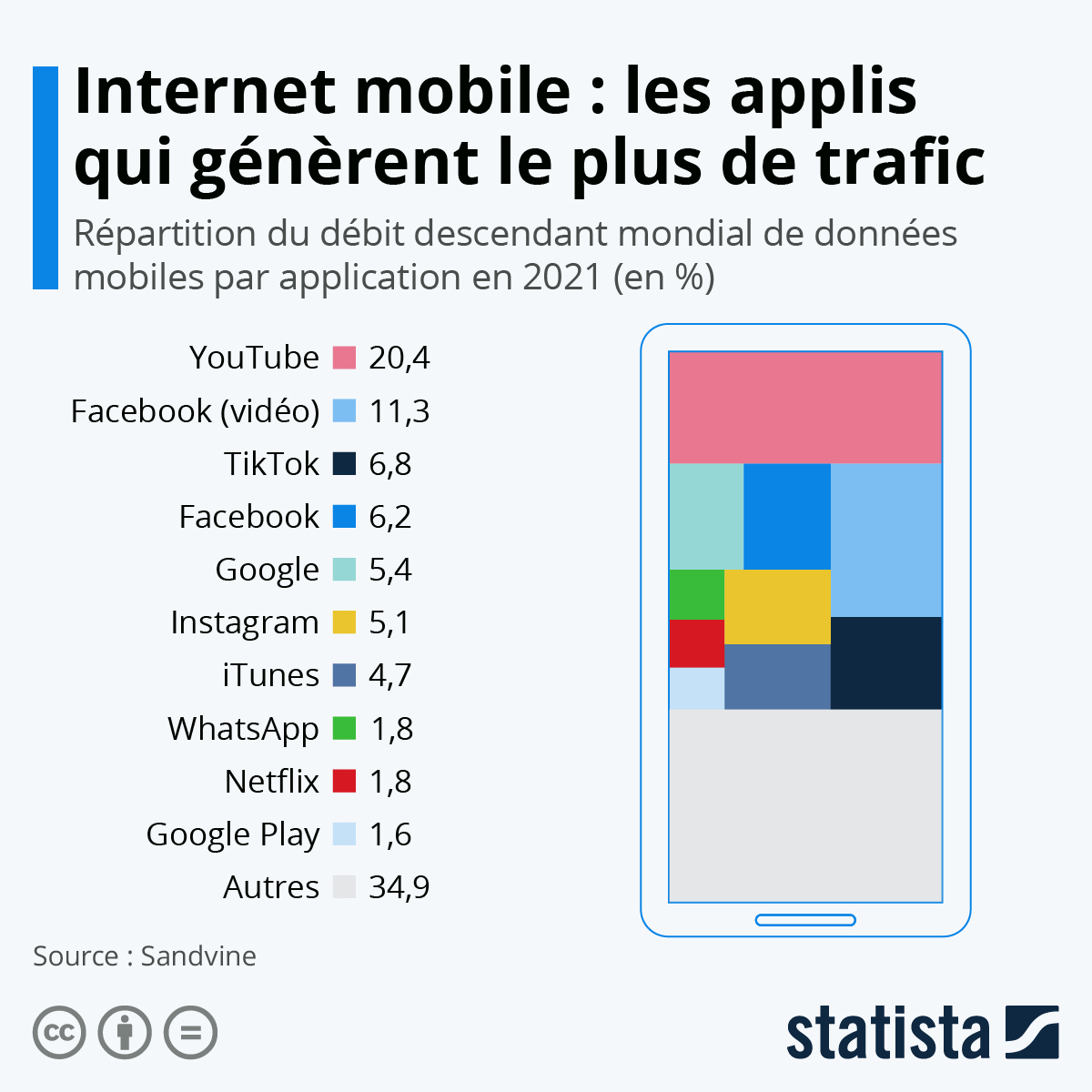 What have we searched for on Google this year?

This is not the most relevant statistic, but it allows us to do a little retrospective of the year that has just passed. Obviously, we find a lot of things related to the health crisis, with the research “curfew certificate” and “Quickly my dose” both present in the top 5 trends of 2021, not surprisingly. The other 3 trends are linked to sport, with the Euro and Ligue 1 for football, as well as Roland Garros for tennis. 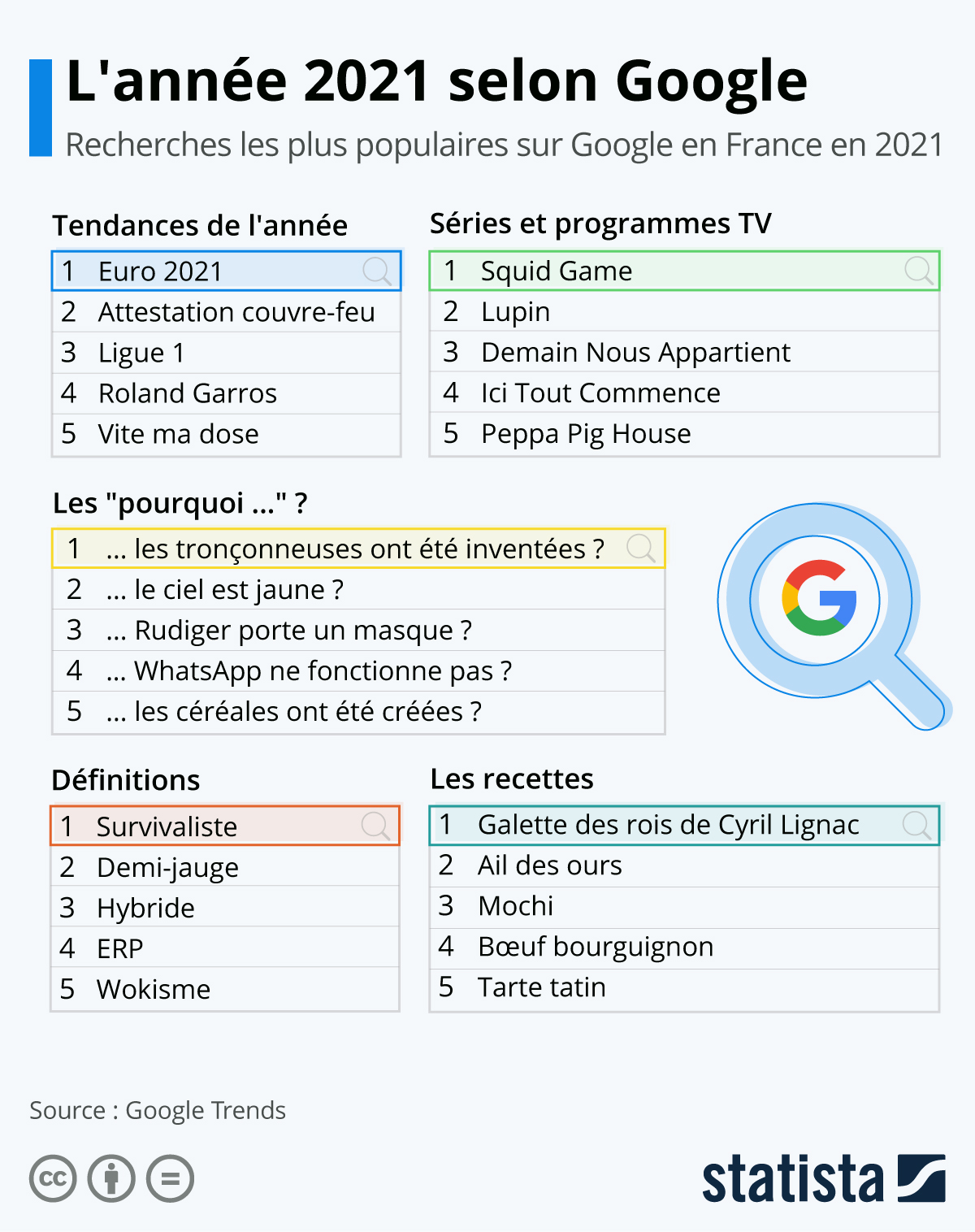 Data and activity generated in 2021 on the Internet

This infographic is not very useful, it’s more of a little bonus to show off your digital culture. The numbers are bound to be impressive, but not really surprising. 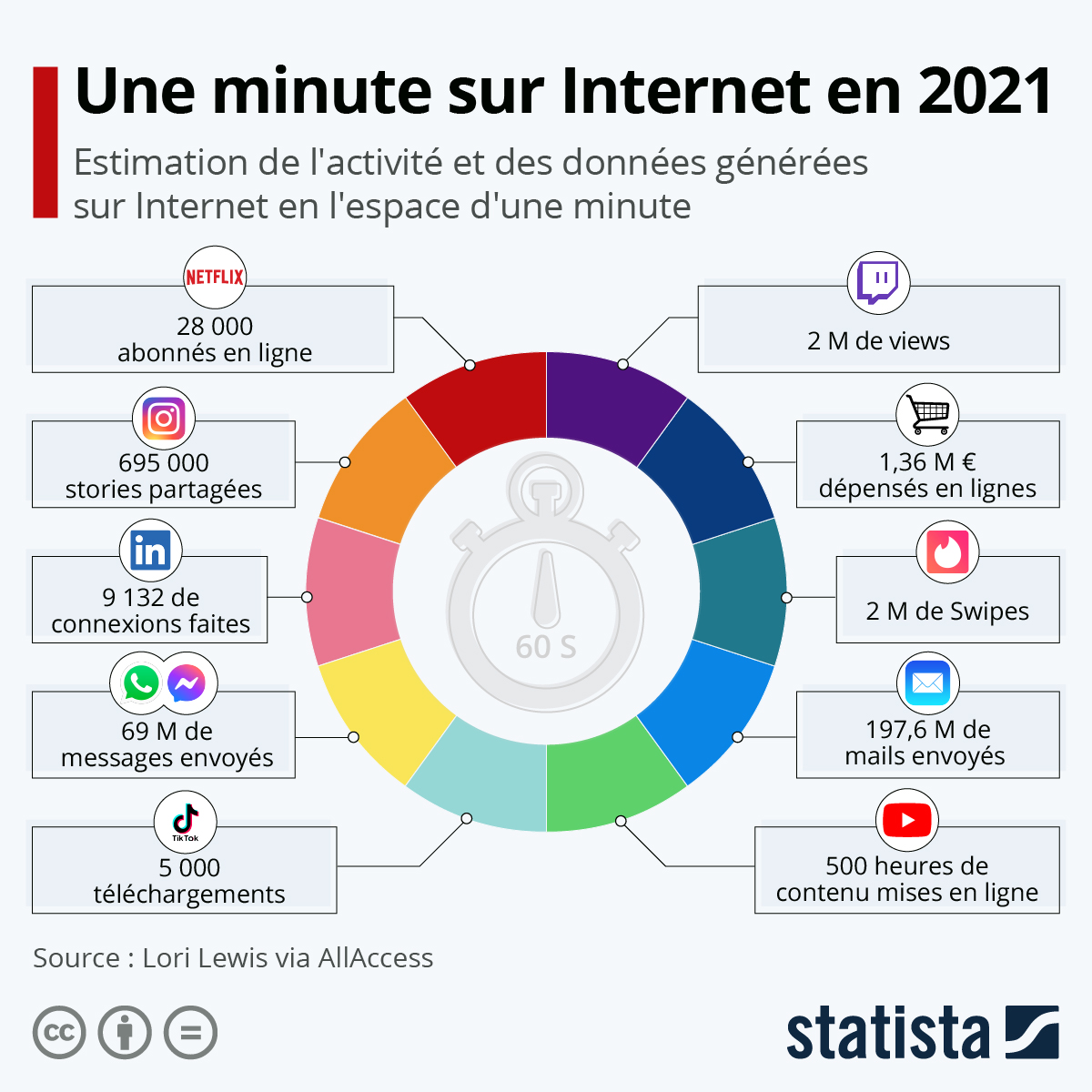 The evolution of E-Commerce in 2021

The last months, the E-Commerce has of course known a strong interest because of this pandemic which we all know. Finally, we were all more or less obliged, apart from a few die-hards, to go through electronic commerce to make our various purchases. And, good news, a priori, this trend is not about to run out of steam.

By 2025, the outlook for e-commerce revenue growth is over 20% in France. Of course, this has to be correlated with other indicators. With the coming democratization of Internet access in countries with less development in the years to come, one can easily envisage higher increases than in Europe or America. 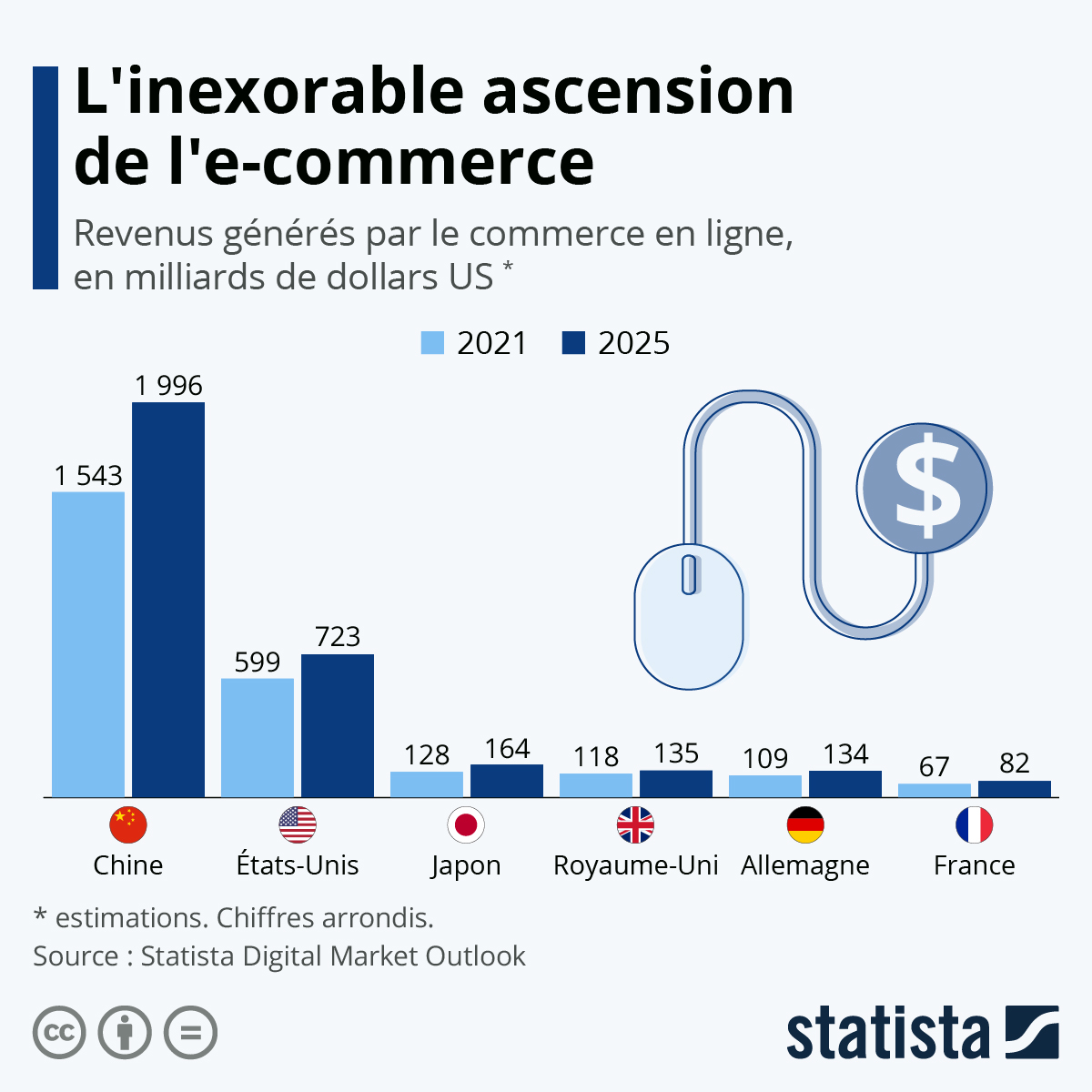 However, despite an increase in online shopping, the trend is not really towards the diversification of online stores. In the vast majority of countries in the study, the American giant and leader of e-commerce sites Amazon, emerged from the pandemic as much or more popular than before. It is only in China where Amazon has lost popularity, but it is true that it is a bit apart. 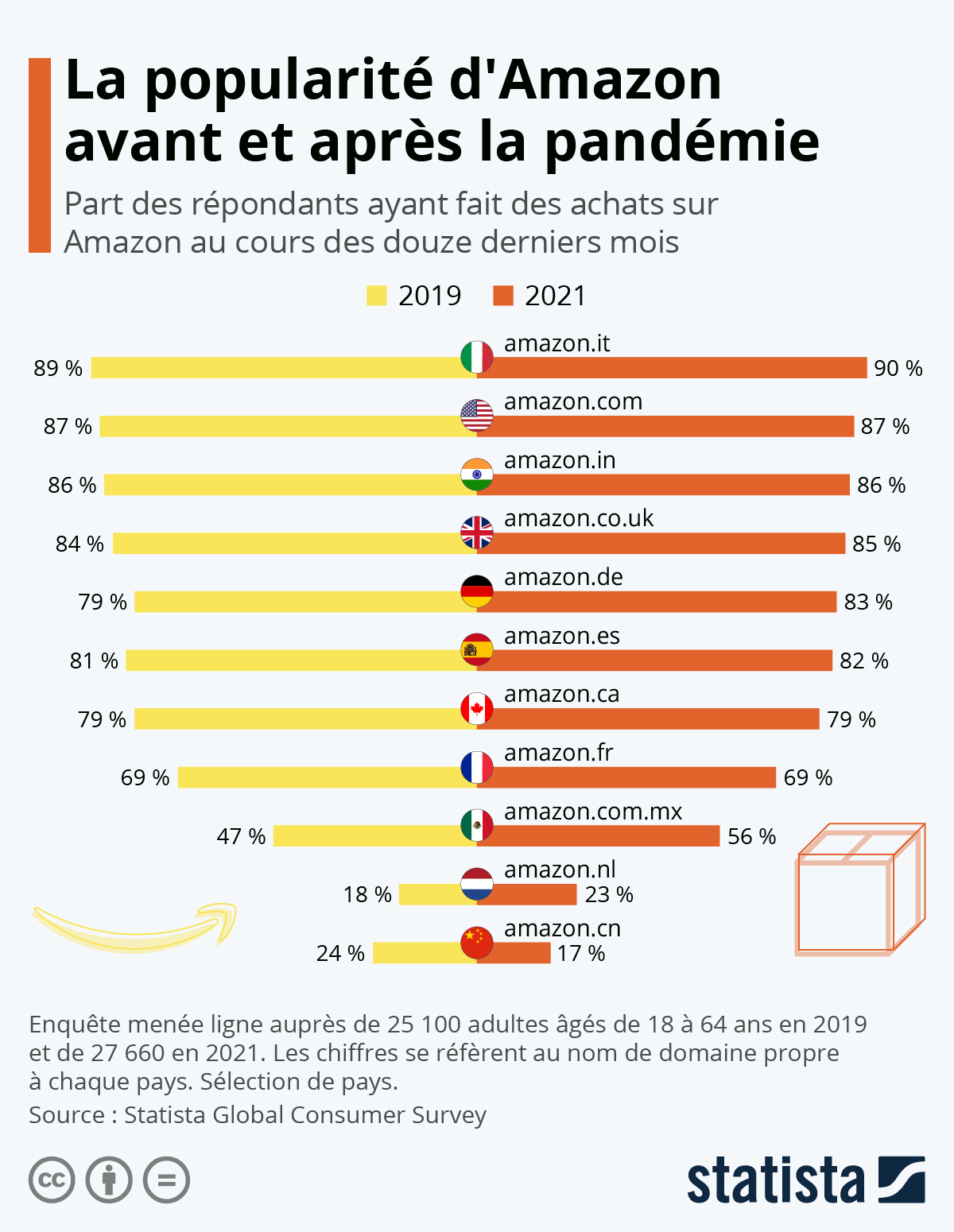 First of all, it is important to lay the foundations: what are the most popular social networks in the world? Even if the figures date from October 2021, this allows to set a context and an overall trend. Despite everything we can say and hear about the “decline” of Facebook, it remains the social media with the most active users: 2.8 billion in October.

Of course, we find TikTok (or Douyin in China) among the most used networks this year, thanks to its meteoric growth over the past 2 years. We can therefore think in first impression that it is the platform that has reached the Billion users the fastest. But this is not the case ! Facebook Messenger reached them in just 4.9 years, compared to TikTok’s 5.1. So, of course, it’s to be taken with a grain of salt since Messenger was launched by Facebook in 2011, which already had nearly 1 billion monthly active users. 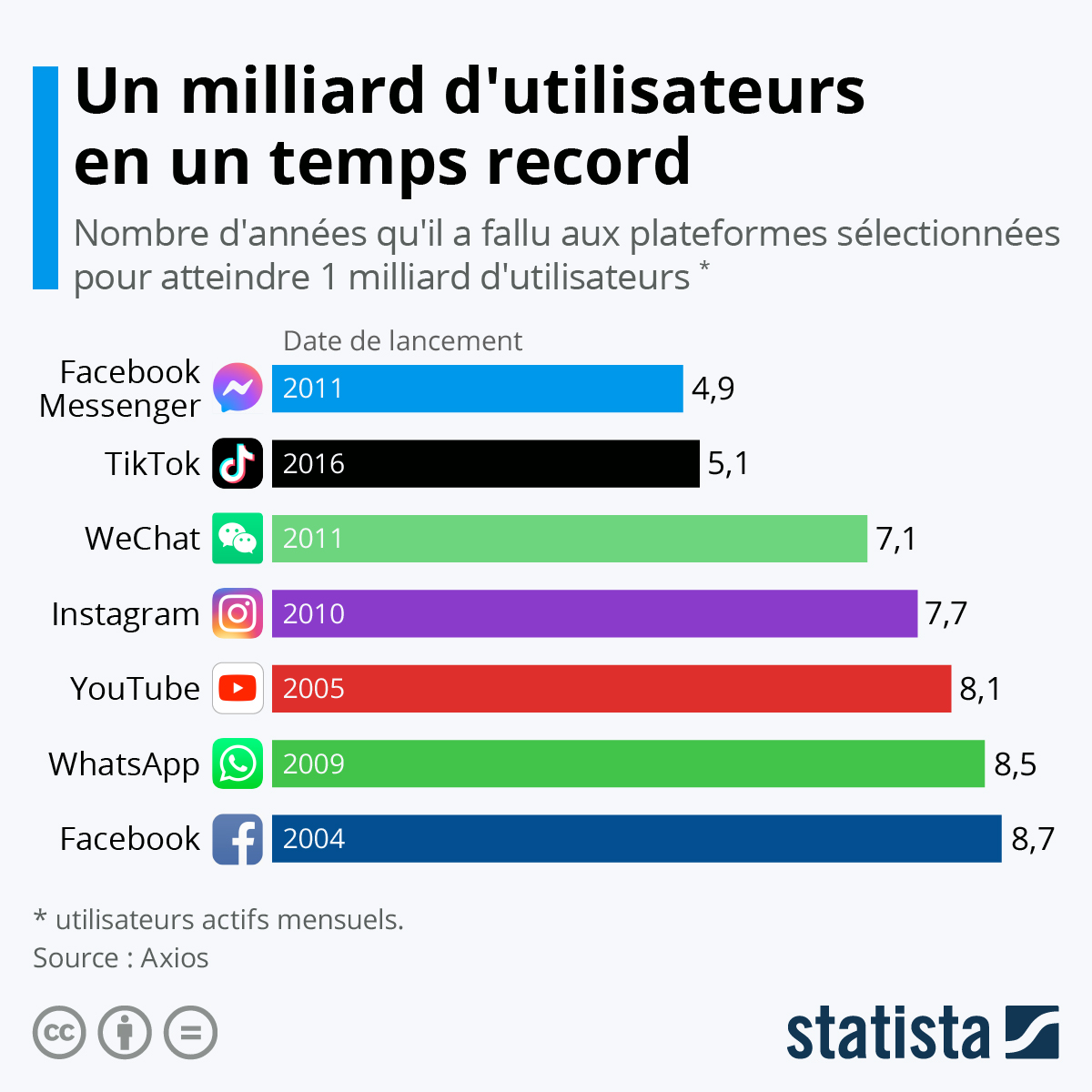 “Facebook is for old people”. You can now use this sentence by supporting it with numbers. About 9 in 10 French people aged 35 to 64 regularly use Facebook, compared to only 56% among 18-24 year olds. Instagram is the opposite, the older the age group, the fewer regular users there are.

Advertising campaigns on our social networks are still popular. The way in which the information was processed is incomplete, since the infographic does not take into account the number of people potentially exposed to these advertisements. It is logical that Belgium generates less income since there are fewer inhabitants than in France, for example. Nevertheless, it allows us to see how receptive the English public is to this type of advertising. There are approximately as many inhabitants across the Channel as in France, and yet the English generate more than 3 times the advertising revenue of French social networks.

To complement these figures, it is also relevant to say that 70% of this revenue is generated on mobile. 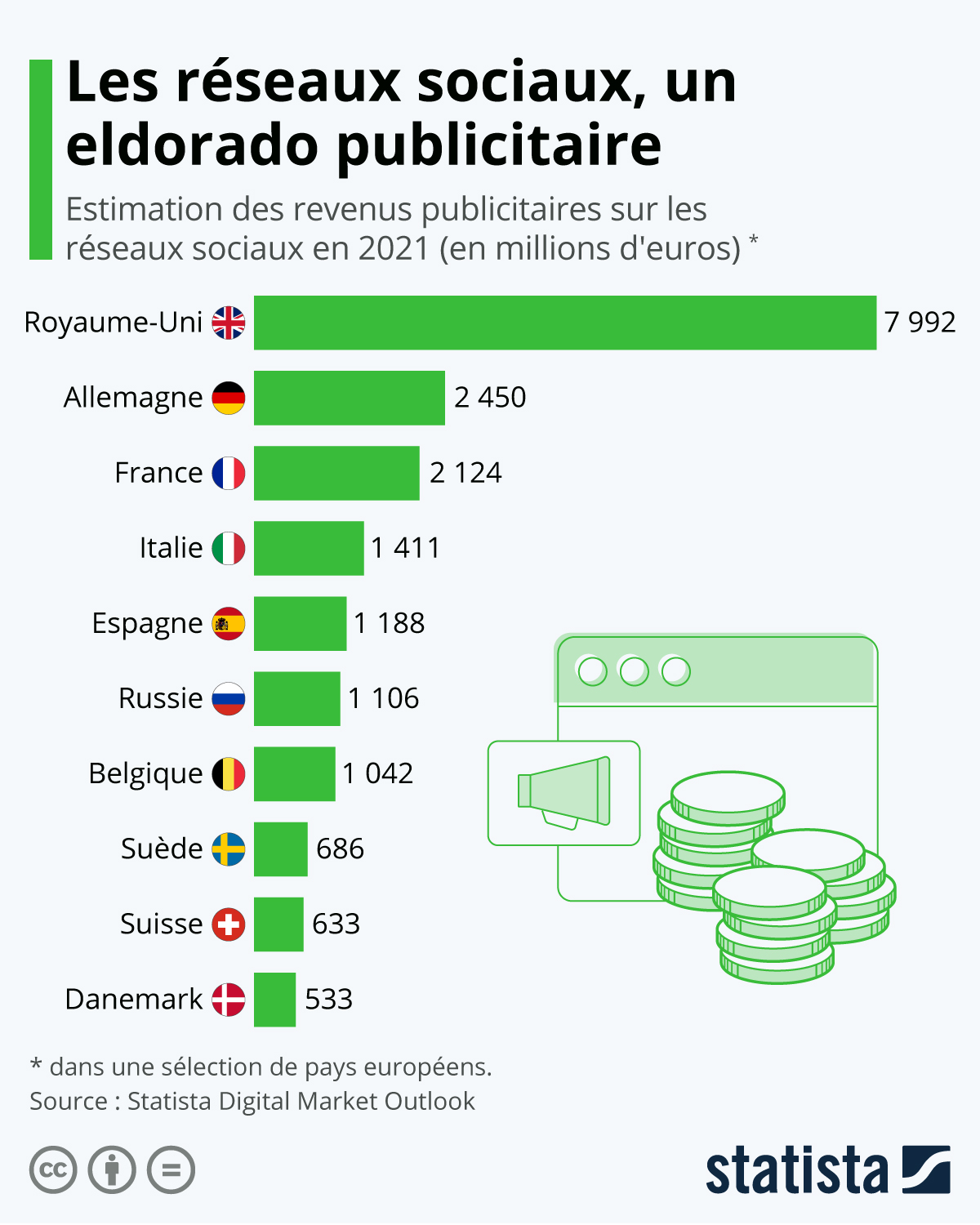